A Preview of the Nationals Course, from Snow-Covered Kickers to Icy Sand Pits – UPDATED: NEW Course Description, Video and Photos

We’ll be updating this as Nationals gets closer, so scroll down to see how course conditions are changing day by day. To see the full Nationals coverage, visit our Nationals homepage here. 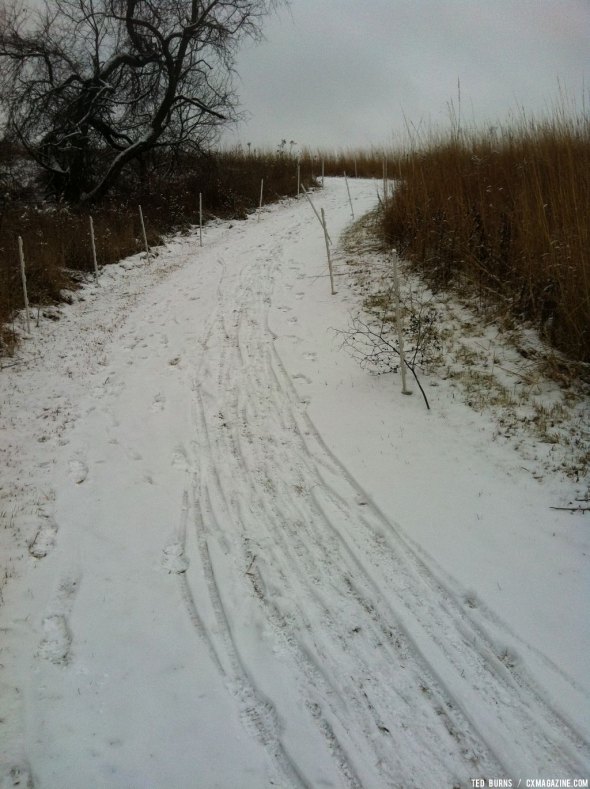 Kicker on the way to the top of the hill. © Ted Burns

MADISON, WISCONSIN – On Sunday, December 18th, Madison received one its first snowfalls of the year and local riders descended on Badger Prairie Park, the site of 2012 US Cyclocross Nationals, like ski bums looking for first tracks on a power day. The evening snowfall had left a dusting of about an inch, and by high noon on sunday there were clear lines through the entire course, which is still marked with empty tape gates, left over from the Midwest Regional Championships that were held on December 10th and 11th. Riders had an easy time navigating the course as it will be for Nationals since the organizers had left their gates, sans tape, in preparation of the big show starting on January 4.

The 2012 Nationals course is wide and less technical than most American courses, which has led to some criticism from riders about the lack of imagination in the course’s design. The closest American UCI race may be the Cross Vegas course, which winds through a soccer field complex into a old resevoir bowl with a few climbs and obstacles thrown in. While not the most technically challenging, Cross Vegas offers spectators an opportunity to view almost the entire race from one or two easily accessible spots. The Prairie Badger course has a similarly spectator friendly layout, though the weather won’t be quite as friendly as Vegas has been in the past.

The Prarie Badger Cross course climbs about 120 feet per lap and has very few technical sections and obstacles to slow riders down. At first glance, it looks like the perfect course for quick and powerful road riders like Jeremy Powers and Meredith Miller. Despite the straight-forward layout, the biggest question will be how weather will impact the grassy course. Late fall and early winter have been unseasonably dry with temperatures dropping and rising below freezing every other week making for inconsistent pitch conditions.

The course is split into three sections:

Section 1: Start to Top of Hill:

The first section of the course runs down a short road and dives into a grass section that runs around the edge of a soccer field. The grass is bumpy but easily ridable even when wet and slippery. The track winds through a few short turns before climbing the course’s longest hill. Most of the hill is a gradual climb, with a steep kicker halfway through, followed by another gradual ascent to the top of the hill. In freezing weather, this will be bumpy but fast and rideable. If the ground is frozen, the hill will be the only spot for the winner to make their move, since it’s the only “selection point.” If it is snowy or rainy, then the kicker halfway through the climb will be messy since it will become progressively unridable when wet. Riders could end up running a long way if the ascent becomes really soft and muddy due to rain or snow, which is very desirable, since it would create a great heckling spot.

Kicker on the way to the top of the hill. © Ted Burns

Essentially all of the obstacles in the course get thrown into this section, which goes by really fast since most of it is downhill. After reaching the top of the hill, you shoot down a dirt road and through a bumpy grass trail to a set of stairs that run up a sharp hill. After a quick dismount and run, you descend down a grass trail, onto a quick strip of road, and then down another fast grass descent into an off camber up hill turn that drops you into a set of barriers. After remounting and riding through a series of 180’s you reach a short sand pit whose day job is working as a beach volleyball court. The stairs are wide and easy to find traction regardless the weather, but the lead up trail to them is uncomfortably bumpy and hard to find a fast line. The off-camber turn at the bottom of the hill will be tricky since in cold/dry weather it will be easy to over-cook it, and in wet weather it will be easy to lose control. Look for this spot to be a hot spot for traffic jams in the first lap of each race. The subsequent turns are not hard but there is not any room for passing so once you are in the gates your position is locked until you come out of the sand pit. After testing multiple lines through the sand pit, promoters eventually settled on 90 degree entry and 90 degree exit in hopes of spicing things up. The sand remains ridable but it is deep, and the slow rate of entry may make this a running section if things get soggy. Off Camber Turn at Bottom of Descent – it’s a hard right at the edge of the pond, you can’t see the trail. © Ted Burns

From the end of the sand pit, you roll through a bumpy grass trail which leads into a wide grassy uphill trail that ends in a short kicker.  Once over the top of the hill you cross a road into another grass pathway, which is fast, but deceivingly harder than it looks if you are pushing the pace.  This section will not likely cause issues regardless of weather so riders will only need to stay off the brakes before crossing the road again into a short windy grass trail section which runs back to the road that runs back to the start finish.  This final section of the course may get tricky in snow and muddy conditions but given the wide open nature of the paths it is mostly going to be useful for passing riders than being a selection point or area to make up time.  In extreme conditions the kicker at the end of the hill could get messy but I cannot see the pro’s having to run it unless the grass turned into a few inches of mud. Sand Pit – Hard to pick a line in the snow. © Ted Burns

It is a long, grassy course, which, if wet, will suck the power out of most rider’s legs in dry or wet conditions. At first blush, the advantage goes to road riders but the current weather patterns could drop a mean wet surprise that would benefit the Tim Johnsons and Ryan Trebon types. Riders looking for an extreme technical challenge may be disappointed unless there is a snowfall or big downpour at the time of racing. What the venue lacks in technical challenges will be made up by the spectator friendly aspects of the course.  From the top of the hill a spectator will be able to view almost the entire race from one spot. With a little hustle a spectator can see all the key action of the lead group by traversing between the first climb and the stairs. Short kicker at the end of the last hill before winding down towards the start finish. © Ted Burns