After Friday’s annual November 1 kick-off to the DVV Trofee series on the Koppenberg, European cyclocross returned for the second major race of the weekend at Superprestige Ruddervoorde in the northwest Belgian municipality of Oostkamp.

Superprestige Ruddervoorde marked the fourth race of this year’s Superprestige series. Belgian rains turned the venue into a Belgian mudder two days after the slick and treacherous Koppenbergcross.

Go inside the storylines and race action with this narrated photo gallery.

Defending World Champ Sanne Cant (IKO – Beobank) entered as a bit of an unknown after an injury from a crash slowed her down at Gavere and she opted to skip the Koppenbergcross. Entering Sunday’s race, Cant had yet to win this season in the face of the young Dutch and 777 team dominance. Sanne Cant pushes her bike up one of the muddy run-ups. 2019 Superprestige Ruddervoorde. © B. Hazen / Cyclocross Magazine

Early in Sunday’s race at Ruddervoorde, Alvarado showed she was the rider with the stuff to get a second Superprestige win. Cant joined Alvarado at the front after a fast and sloppy start, but the young Dutch rider had too much early on, and by the end of the first lap, she already had a 15-second lead on the World Champ. Alvarado did not look back from there, capturing her fourth win of the season and retaking the top spot in the Superprestige overall classification. Cant finished a strong second in probably her best showing of the season thus far. 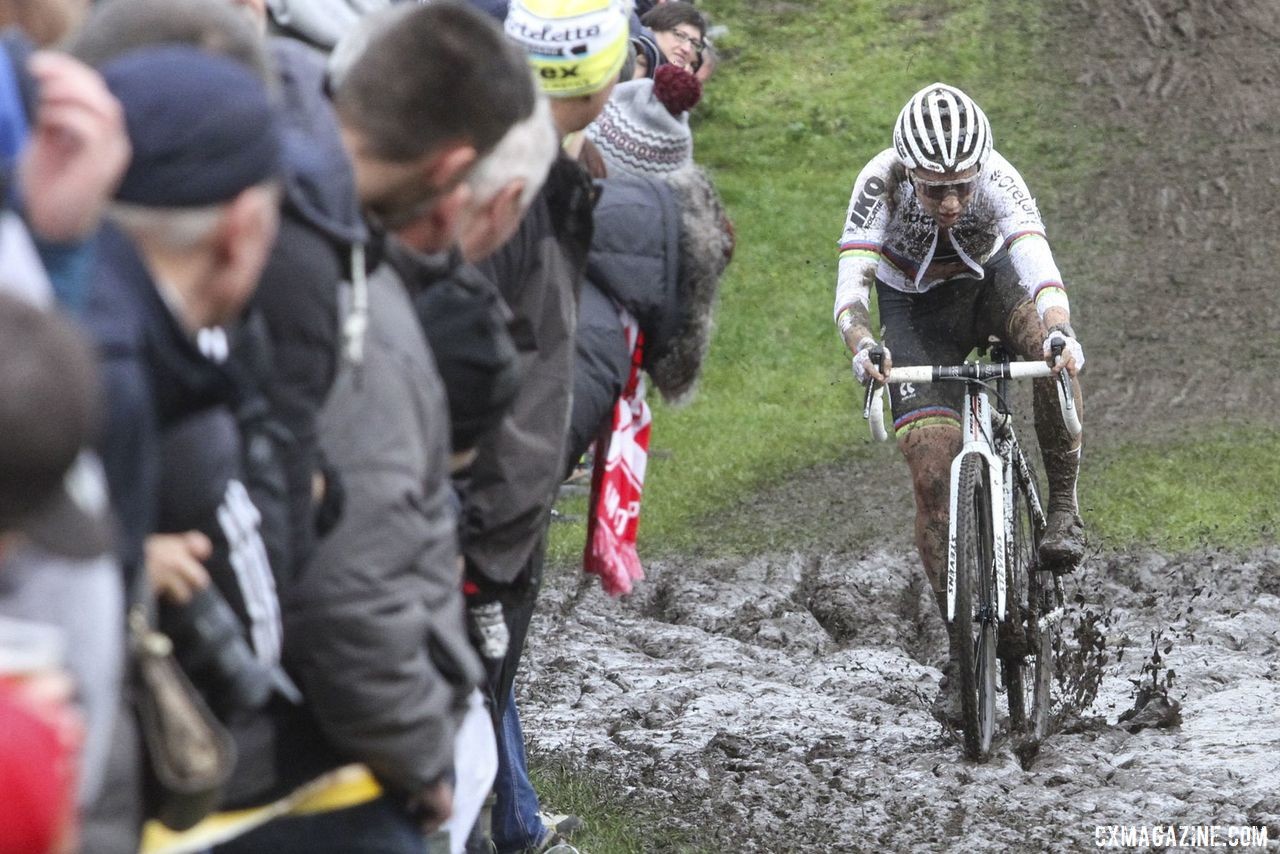 The American women were also well-represented at the front of the race. After not receiving a start contract at Gavere, Katie Compton (KFC Racing p/b Trek Knight) was on the start line alongside Kaitie Keough (Cannondale p/b CyclocrossWorld) in Ruddervoorde.

Keough got out to a strong start and avoided some of the messiness that occurred on the steep off-cambers back in the pack. Compton used her renowned mud legs to charge forward and eventually join Keough in a race for third behind the two Euro leaders. Compton eventually passed Keough midway through the race and took over a third position she would not relinquish. The Ruddervoorde field riding course was on the edge of a field. 2019 Superprestige Ruddervoorde. © B. Hazen / Cyclocross Magazine

Keough wrapped up a fourth-place finish that tied her best result of her 2019/20 European campaign. For the full story from Sunday’s Elite Women’s race, you can read our report. Mathieu van der Poel said it took him about half the race to get the cyclocross feeling back. 2019 Superprestige Ruddervoorde. © B. Hazen / Cyclocross Magazine

The defending World Champion entered Ruddervoorde riding a 26-cyclocross-race winning streak, but there was a bit of added intrigue surrounding his return to ’cross on Sunday because the last memory most fans have of Van der Poel is him bonking at the start of the last lap at Yorkshire Road Worlds a month ago.

Add in the early-season dominance by Eli Iserbyt (Pauwels Sauzen – Bingoal) and the question of how the young Belgian would compare head-to-head with Van der Poel, and there was plenty of hype to go around in the Elite Men’s race.

Inspired by the challenge of facing Van der Poel, Iserbyt was the hot starter on Sunday, leading the charge into the mud in the first lap. Eli Iserbyt was aggressive early on, setting the pace at the front. 2019 Superprestige Ruddervoorde. © B. Hazen / Cyclocross Magazine

He held the lead for a spell before Laurens Sweeck (Pauwels Sauzen – Bingoal) stepped up to aid the team effort of taking on the Van der Poel juggernaut. Iserbyt’s early effort eventually caused him to drop off the pace, leaving Sweeck as the rider hoping to have the special sauce to spoil Van der Poel’s season debut. Not surprisingly for anyone who has watched Van der Poel’s cyclocross dominance for the past several seasons, the Dutch wunderkind went solo from Sweeck in Lap 5 and held his advantage to make it 27 straight wins. Mathieu van der Poel had no one in front of him with one to go. 2019 Superprestige Ruddervoorde. © B. Hazen / Cyclocross Magazine For the full story from Sunday’s Elite Men’s race, you can peruse our race report.

For a full look at the sights of Ruddervoorde, check out this photo gallery from Bart Hazen.