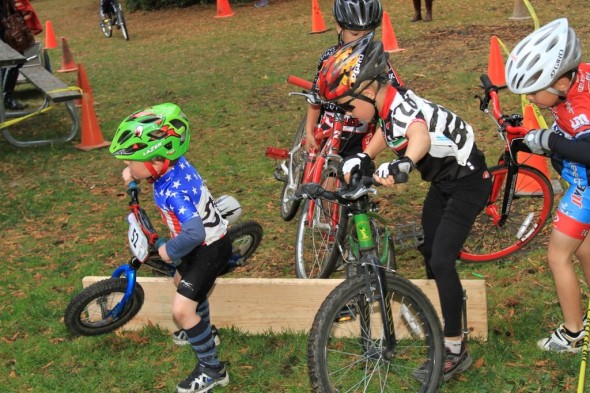 The future of our sport and a mini national champion. © Janet Hill

by Kenton Berg
The third race in the Seattle Cyclocross Series went down on the shores of Silver Lake in Everett, WA on Sunday. What had been a long stretch run of great weather had recently given way to cooler temps and rain which limited the dust and slightly packed down the sand on the long beach run. As it has been for the past few years, the Silver Lake course was challenging from start to finish requiring power, solid bike handling, and good fitness. The short pavement start section quickly transitioned riders into a short sand section which was followed then by another 100 plus meters of sand before a single barrier and a short run up. This early section split the fields in every race with the sand sections claiming numerous victims through the day to crashes. Once past the short run up it was on to a series of short downhills followed by short, grindy uphills. Riders were then sent back down another 80 pluse meter section of beach past the pits and into another short, grindy uphill. Another series of short ups and downs along with off-camber switchback turns brought racers out of the woods section and into the lower field. Here they were treated to several 180 degree turns requiring good line selection and handling before heading out through the finish area and back into the sand for another lap. Logan Owen and Gian Dalle off the front of the race. © Janet Hill

The Men’s Elite field promised to be a barn-burner with local favorite Logan Owen (Redline) in the line up along with Gian Dalle (Don Walker) who has been a front runner all season. From the gun the race was wide open with the field spilling into the sand and out to the first choke point of the run up. Once the field was strung out Owen emerged up front with Dalle in tow. Chasing hard 10 seconds back was the CyclocrossRacing.com duo of Doug Reid and Kevin Noiles with several others not too far behind. By the end of lap one Owen and Dalle had moved clear by 30 seconds and looked to be stretching their lead out further. Owen was content to lead and see if Dalle could follow and was biding his time before putting in any major moves. On lap three Dalle dabbed on one of the technical turns and Owen jumped on the opportunity to go away solo. Behind the leaders the racing was really on within the chasers as Benji Perrin (Second Ascent) was making his move through the field along with Toby Swanson (Eatonville Outdoor). As the race wound down Owen would stay upright and upfront and take the win by 50 seconds over Dalle. Perrin would make the late race charge to get by Reid and would take the final podium spot for his first top three of the year. Kari Studley concentrates on one of the downhill sections © Janet Hill

The Women’s Elite field hit the sand after the men’s and within half a lap it was three riders going away with the field splintered behind. Kristin Kelsey (CycleU/PopCap) took the hole shot and was leading into the single barrier at the far end of the sand section. Kari Studley (Redline), looking to make up some ground after a blown start, was hot on her wheel along with Marsa Daniel (Group Health). Studley would over take Kelsey on the short run up and the two would begin to put some space into Daniel, Kelly Jones (Steed Cycles), Mel Lewis (CycleU/PopCap) and the rest of the field. By the end of lap one Studley would have 15 seconds on Kelsey with Jones and Daniel further back and chasing hard but not making up ground. Studley would go on to increase her gap to second and as the race came to the final lap Studley closed it out with a commanding one minute lead. Kelsey would finish out her ride for second place finishing a minute ahead of the battle for third and fourth that was coming down to the final lap between Jones and Daniel. Jones would get a small gap on the final portion of the course to nip Daniel by a mere two seconds to take the final podium step.

The fourth installment of the Seattle Cyclocross Series will be on October 28th at the Sprinker Center outside Tacoma, WA.
For full results visit www.seattlecx.com 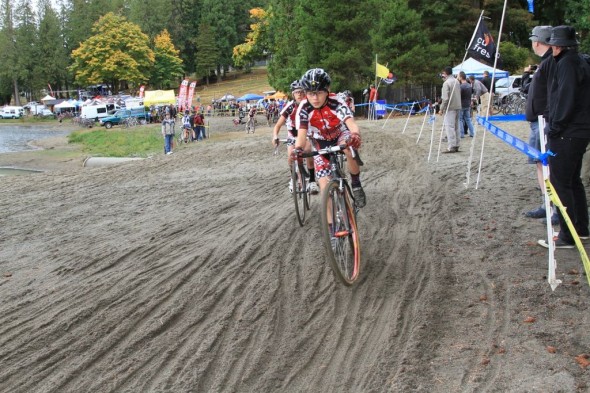