With cyclocross racing in full swing across the globe, the Rumors & Rumblings have quieted on our pages. The semi-regular column is back to cover some cyclocross news and offer an honest-to-goodness rumor that piqued our interest.

Please let us know of any worth watching in the comments or at news [at] cxmagazine.com.

Logan Owen Steps Up to the World Tour

Racing on a pro tour team has always been a dream for former cyclocross star Logan Owen, and last week it finally became a reality. Owen signed a contract with Jon Vaughters’ Slipstream Sports team that will go under the EF Education First-Drapac (formerly Cannondale-Drapac) name in 2018.

Beyond excited to announce that I've signed with @rideargyle for the next two seasons! This has been a dream of mine since I started racing on the road when I was 13. I would like to thank @jvaughters, @rideargyle, and @efnorthamerica for this amazing opportunity! Thank you to @axelmerckx, @thejoeholmes and @axeonhb for helping me achieve this goal!Link to full article in my bio. 📷 @daveywilson

Owen won eight junior and two U23 cyclocross national championships before announcing last October that he would be focusing on road full time. Prior to stepping away from cyclocross, Owen finished third behind Jeremy Powers and Stephen Hyde at 2016 Nationals in Asheville. Meredith Miller and Georgia Gould Are Back

Meredith Miller and Georgia Gould are two of the timeless stars of U.S. Women’s cyclocross. After racing a full UCI schedule through the 2015 season, Miller took a step back and stuck to local racing in the Boulder area.

Two weeks ago, we spotted Miller at CrossVegas, where she had an impressive eighth-place finish. 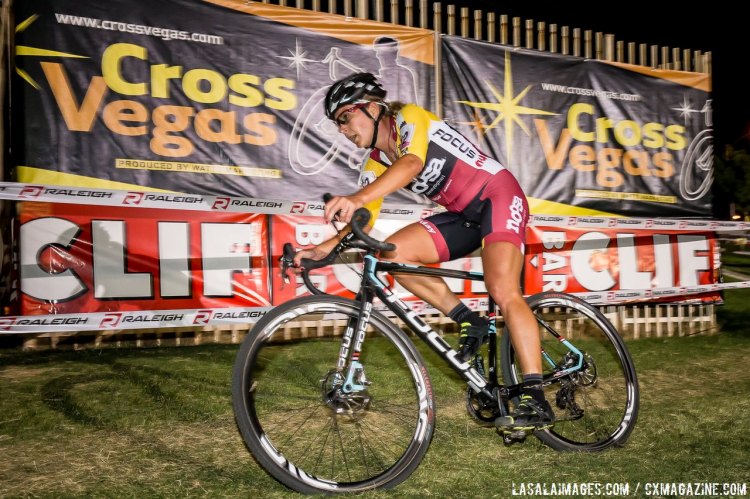 Meredith Miller has had success at CrossVegas in the past and was back again in 2017.  2014 CrossVegas © LasalaImages.com

After giving birth to baby Quinn this summer, Georgia Gould is back on the cyclocross bike as well. Gould has done a couple races outside Boulder, one of them against Miller, and is on the start list for this weekend’s Charm City Cross. We plan on keeping our eye on these two living legends and hopefully we will be seeing them at a few more races this season.

2016 Women’s World Champion Thalita de Jong was hoping to return to cyclocross last weekend in Gieten after suffering a knee injury at Hoogerheide earlier this calendar year. According to a story by Dutch newspaper BN DeStem, De Jong hurt her back while recovering from her injury suffered at Hoogerheide, and she has decided to shut down her training for the time being.

We will continue to track De Jong’s recovery as she tries to return to health and starts with her new team.

Winner of CrossFit Games Cyclocross DQed for PED Use

In less positive news, Ricky Garard, the Australian who won the cyclocross race at the 2017 CrossFit Games, tested positive for PEDs after finishing third overall at the Games in Madison. His win was vacated, he had to give back $76,000 he won and he is banned from competition for four years.

Gerard’s barely missing the Games in 2016 and then qualifying in 2017 and making the podium was a great story, but as we have experienced all too often, it was too good to be true. As you can appreciate my world has come crashing down, it is heart breaking & it's hard to comprehend that I am in this position. . On the pursuit of becoming all I could be as a CrossFit athlete, I looked into ways that could improve my performance legally & within the rules, with no intention whatsoever to be a cheat. . I was taking this same supplement at The CrossFit Games as I did at The Pacific Regionals where I was drug tested?? Therefore, I didn't feel the need what so ever to change anything. I thought I was competing within the rules with no unfair advantage over others. . But, after further investigation & specific testing it has been revealed that the supplement & my limited research has failed me & I have received a positive test with a 4 year suspension. To be clear this supplement was taken in tablet form with nothing ever injected. . Everyone in life makes mistakes, it's how you learn from them that separates the great from the mediocre. These actions don't define me, this sport doesn't define me. It's the lessons & growth of my character that truly matters to me. . In time, I know this may be the best thing that ever happened to me. I wanted the title, I wanted to win & I was willing to do everything in my power to achieve that goal. Not for one second should you take away the hard work, sacrifice, dedication & achievements from my efforts. . At 23 years old I have a lot of years left in my life, I have endured the process, I have & I will become something because of it. . In the end, I am apart of their sport “business” , The CrossFit Games. They have there own rules, guidelines & policies to abide by. I have unintentionally fucked up, their evidence has proven me guilty. I will do my time & continue to own my actions day by day for the rest of my life. . I really hope The CrossFit Games continues to tighten up their testing procedures, enforce the same level of strictness to all other competitors like they have to me & they continue to strive towards a legitimate drug free sport. *POST CONTINUED*

Finally, we close with a bit of news that puts the “rumors” in Rumors and Rumblings. Polish rider Pawel Szczepaniak won the U23 World Championships in Tabor in 2010, but had his title stripped after testing positive for EPO. The Polish Szczepaniak brothers led the U23 World Championship race in Tabor in 2010. They both received UCI bans after testing positive for EPO.  © Bart Hazen

He and his brother Kacper made for a great story, finishing one-two in Tabor. However, the story turned sour when they both tested positive for EPO after the race. Kacper received a four-year ban from the UCI and Pawel an eight-year ban.

Pawel’s ban officially ends in March, 2018, and we have heard he is planning a comeback to the sport. Stay tuned as we continue to track this story.

Stay tuned for more on these stories and see all of our coverage of cyclocross Rumors and Rumblings.