Weekend Preview: Round 3 for USGP in Louisville, Super Prestige in Belgium 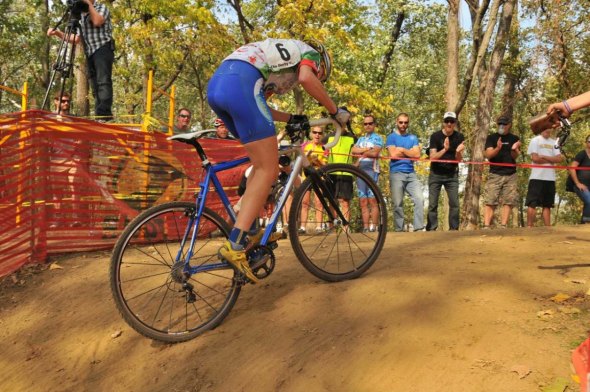 This weekend the US Gran Prix of Cyclocross returns to Louisville for round three, where Georgia Gould won both days last year. © Greg Sailor – VeloArts

This weekend brings a full schedule of cyclocross across the pond and in the states. The European fun starts Friday in Belgium with the 49th running of the Jaamarktcross and continues Sunday with the third round of the Super Prestige series at the tenth Cibel Bolleke Cross in Hamme-Zogge, Belgium.

This weekend’s excitement in the States centers around the US Gran Prix of Cyclocross’s  third-round, with a visit to Louisville, Kentucky, for the Derby City Cup.

Jaarmarktcross, Belgium – Friday
The 49th edition of this race will provide a chance for last year’s winner Sven Nys to regroup after his disappointing performance in Sunday’s Ronse, where Kevin Pauwels, who will also be at this race, took the win. A top field is expected, although Bart Wellens has been ill and will most likely miss the race.

USGP Derby City Cup, Louisville, Kentucky – Saturday & Sunday
The 2011 Derby City Cup presented by Papa John’s is the third stop on the 2011 Exergy US Gran Prix of Cyclocross and visits the future site of the 2013 World Championships in Eva Bandman Park.

Men’s series leader Ryan Trebon (LTS-Felt) has won two of the four races so far, with runner-up Jeremy Powers (Rapha-Focus) taking one win and Bart Wellens (Telenet-Fidea) taking the other. On the women’s side, Katerina Nash (Luna) leads the series and has won three of the four races, while Katie Compton (Rabobank) has only raced two of the events so far but has a win and a second-place result to show for her efforts. Nash’s teammate Georgia Gould is second overall, with Caroline Mani of France in third.

Nash and Compton both had good weekends last week, sweeping the podium, with Nash victorious at Cycle-Smart International on both days and Compton taking all three wins at the Cincy3 Festival.

SuperPrestige Hamme-Zogge, Belgium – Sunday
The 10th Cibel Bolleke Cross Sunday in Hamme-Zogge, Belgium, marks the third race of the Super Prestige cyclocross series. Many of the world’s top riders will be toeing the line Sunday, including series leader Niels Albert, who won the first two rounds of the Prestige at Rudervoorde and Zonhoven.

While last year’s race at Hamme-Zogge proved to be a truly Belgian mudfest won by Sven Nys, this year will likely be bone-dry and fast. The Super Prestige consists of eight races, starting in the beginning October and running through the middle of February.

Stay tuned to Cyclocross Magazine as the weekend progresses!

Next post Two Months Down, Four to Go: A Column by Christine Vardaros

Stevens and Focus: The Latest from Eurobike 2014