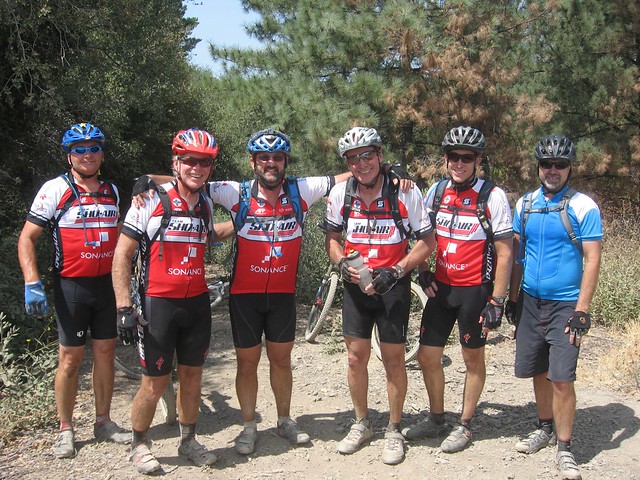 Yet the owner of Sho-Air International, due to all his travel time, is on the road a lot in more ways than one. Owning and running a multi-million dollar company that specializes in airfreighting event materials for expos, he’s always on the go, and is lucky just to get a pavement ride in. When he does, however, it’s not just to stretch the legs. Just as in business, to say Tedro is competitive is an understatement. His last ride had him beating 1178 other riders to snag a 1.1 mile-long Strava KOM.

Spend all that time on the road, and you start to think about how your passion could help skinnier tire forms of bike racing as well. Tedro looked into it. “The road doesn’t need any help,” he determined. “There’s hundreds and hundreds and hundreds of events. It’s highly financed by established people.”

Tedro isn’t a cyclocross racer, hasn’t religiously followed the sport, but its offroad and spectator-friendly nature appealed to him. Could he make a difference in the bastard child that sits between road and mountain biking?

“It was a natural fit, cyclocross goes a lot better with mountain biking than road biking,” Tedro explained. “I mean it’s a road bike or a hybrid road bike on a small mountain basically. It incorporates the best of both worlds I thought. I also have heard some things over the years that cyclocross years ago had a lot of support and they were getting a lot of assistance from the UCI, big establishment UCI racing. They did really well but then it kind of went without warning, it all went away.”

Tedro’s interest was piqued, and with plenty of experience running his top-level mountain bike series, he knew he could help bring the sport together. Yet he knew little about the sport, had never heard of the Saturn Supercup, USGP or NACT, and didn’t quite know how to get involved. Remember when the big show rolled into town, all the best racers competed and the fans showed up? Tedro doesn’t, but with Trebon he’ll bring the success of the Saturn Supercup and USGP back. photo: Sundt hopping the barriers at Fort Devens, Saturn Supercup © Andrew Yee, Cyclocross Magazine

Many joke that rule number one to keep your sanity on the Internet is to not read the comments. However, many can be thankful that Tedro violates that rule at times. Tedro had ideas, but after stumbling across an online thread in October 2015 lamenting how cyclocross was missing a unifying national series, he saw his old friend Ryan Trebon chiming in on the topic. He dropped “Give me a call” in the comments.

“I had been thinking about this, and I saw a post where people were discussing it, and Ryan was discussing the fact that it’s bad that we don’t have a clear-cut series,” recalls Tedro. “What do you think of this concept?” he asked Trebon.

Trebon was all ears, and excited to take action. Tedro asked his old friend, “Do you think you could get people together to do it? Because I don’t know very much about cyclocross, I don’t know any of the infrastructure.”

Suddenly Trebon was hired full-time and empowered to make a series happen.

Trebon, still known as “Treefarm” to many, was a natural fit to plant the seeds and grow a series’ roots. The five-time winner of the USGP directly benefited from the last-standing cyclocross series. “I was fortunate enough to race at a time when the cyclocross scene was growing and establish myself then as well too,” Trebon told Cyclocross Magazine. “The biggest difference I noticed the last few seasons without the USGP was the withdrawal of teams and sponsors from the U.S. cyclocross scene, and a lack of media focus on key events throughout the season. We have great races and great racers we just need an avenue to let them showcase themselves and a place for sponsors to feel its worth investing their time and money into.”

Trebon was sick and tired of the lack of a national series, and racers skipping C2 days. With backing from Sho-Air’s Scott Tedro, he’s setting out to address both issues. photo: after racing in China. © Cyclocross Magazine

Trebon got on the phone, reached out to promoters, USA Cycling, and the USGP’s Joan Hanscom (who is now at USA Cycling). Then he dipped into Tedro’s pocketbook as far as his long arms could reach, and all of a sudden, for the fourth time in our sport’s young history, we’ve got a national cyclocross series this season. The brand-new 2017 Sho-Air Cycling-funded US CUP CX will team up with four existing cyclocross weekends to comprise a seven-race cyclocross series:

The Sho-Air Cycling group teams with these promoters to add promotion, stature and series prize money on top of what’s already established and offers a $10,000 prize for the top male and female racer at the end of the series.

Sure, the series stays on the East Coast, but expands beyond the country’s other cyclocross series, the longstanding New England-based UCI series most recently sponsored by Vittoria. These events were picked in part because they do not conflict European World Cups, and Tedro hopes that if successful, the event will expand to include more events. In 2016, Charm City Day 1 was a C2 event and didn’t have the star power of Day 2’s C1 event. This year, with the USCup CX series, that might change. photo: Elite Men. © Ricoh Riott

The seven race days include both C1 and C2 races, scoring them equally. Trebon has publicly complained about racers skipping the second day of a two-race weekend, believing that cherry picking C1 points is doing promoters and fans a disservice.

In Tedro, he had a willing ear. Tedro relied on Trebon’s experience and judgment. “Ryan educated me that [events] are two races and that one of the biggest problems for the promoters is a lot of times, people will race the main day then not stay for the second day,” Tedro explained. “You know, that’s a problem. They want the best guys there and the best girls there. They want the best riders there all weekend.”

With the power of creating rules, Trebon is now setting out to change that. “I felt that it was important for racers to race both days of the weekend, and the only way to do that was to put near equal emphasis on both days, whether they were a C1 or C2.”

The first year of the series is a winner-take-all, $10,000 prize for the top male and top female racer, along with what Tedro describes as “a big beautiful belt, and crown and cape.”

“I felt that it was important for racers to race both days of the weekend, and the only way to do that was to put near equal emphasis on both days, whether they were a C1 or C2.” -Ryan Trebon

Trebon and Tedro are talking about a potential manufacturer’s title, and the possibility of expanding to rewarding other places in the future if the resources and support are there. In future years, Tedro says USA Cycling will contribute to the budget for advertising and media.

Stay tuned for more on this breaking story and our exclusive interview with Tedro.