Sure, USAC and UCI have their own cyclocross rankings. And with the USGP, NACT, MAC and Verge series with UCI points up for grabs and North Americans hitting all of these series, it’s hard to figure out who’s the best of our continent. Enter Cyclocross Magazine’s North American Cyclocross Rankings, the first of its sort, determined by complex mathematical equations calculated only in the head of resident Live Coverage and Fantasy Cyclocross League guru, Jake Sisson. Agree? Think he missed a number? Let us know. Johnson has ripped off wins in four straight weeks, starting with one in Gloucester, two in Providence, One in Toronto and now one in Louisvile. Johnson has beaten everyone of note and has looked always looked the strongest in those wins. He’s the fastest man out there right now, and has 5 UCI wins to show for it. Johnson is also poised to take the NACT jersey from Jonathan Page when he heads to Colorado, and he’ll be buoyed by the fact that the only men who can take it from him are his own teammates.
2. Jamey Driscoll (Cannondale/Cyclocrossworld.com)
We’re quick to forget Driscoll’s win in Las Vegas in September under the slew of second place finishes he’s got this year. 30 fewer meters in Louisville and Driscoll would have another big win. He’ll just have to settle for the USGP leader’s jersey. Driscoll, too, has a realistic shot at taking home the NACT overall jersey when the team heads to Colorado, and it would be a defining moment in his career if he could hold both jerseys at once.
3. Ryan Trebon (Kona)
It took a while for the American Champion to warm up to his national championship form, but a win on Saturday confirmed he was back to his best. Crashing and DNF’ing suggested otherwise, but while he may have been unlucky, his form is unquestioned, with three wins in two weeks. He’ll not be happy to lose the USGP jersey but he’s tied on points for the lead, and will have that carrot when the USGP rolls into New Jersey in two weeks time.
4. Jeremy Powers (Cannondale/Cyclocrossworld.com)
Powers was fighting a cold in Louisville and still managed to grab a third place finish. While Powers was the not at his fastest in over the last weekend, he’s still got 5 UCI wins on the season, and is always dangerous. Powers will need to work on being more consistent and use some of his start energy farther into races.
5. Geoff Kabush (Maxxis-Rocky Mountain)
Kabush is once again wearing the national champion’s kit of Canada, and he was the only one who was able to stay with Powers on Sunday in Louisville. Kabush is an unrivaled mountain biker this side of the Atlantic, and he’s got more miles in the legs than some, but he’s consistently been in the mix at the USGP, and is a good pick for a dark-horse in weeks to come
6. Dan Timmerman (RGM Watches-Richard Sachs-Radix)
Timmerman is a big fish in a small pond at the moment in New England, with the typical New England threats pursuing bigger catches, but Timmerman has proven up to the opportunity on the big stages, mixing it up with Barry Wicks in Delaware and Pennsylvania last weekend. Two wins in New Gloucester, Maine help’s his case too.
7. Chris Jones (Champion System)
No one has had a more unheralded season than Chris Jones, who continues to score big results week in and week out. He’s not on the level of the top five, but he’s also a roadie first. That title may not be accurate, however, as Jones has been as good in the mud this year as he’s been in the flat and dry, so he’s been working on this cyclocross thing.
8. Barry Wicks (Kona)
Wicks had a solid weekend in Pennsylvania and Delaware but fell off the pace a bit when the competition stepped up in Louisville. With Cannondale/Cyclocrossworld.com riding as well as they are, Wicks needs to move up into the top five so he can help Trebon as the season wears on. Still, Wicks is always a threat, and if the conditions turn sour, he’ll be in the mix.
9. Jesse Anthony (Jamis Bikes)
Anthony should probably be ranked higher than 9th since he had some great results in Louisville. The only thing holding him back, however, is the fact that those results were really his best of the year. Anthony started out slow, but he was also the last one off the back of the lead group on Saturday that contained Trebon, Driscoll and Johnson. That show’s he’s got the talent and the form is coming along with it.
10. Davide Frattini (Fuji Bikes)
Frattini is on the cusp of breaking into the front group. He’s had great races this year in the mud and the dry, but he’s just not quite on the fitness level of the heads of state. He’s going to have a good race one of these days and really surprise some people, and a 7th and 9th in Louisville shows off his pedigree.

Katie Compton takes our first #1 spot on the Power Rankings

Compton has not raced in the United States since taking home three wins in Ohio two weekends ago, but she’s still far and away the best rider in North America. She’s undefeated when she suits up in the Stars and Stripes, both Stateside and in Europe, and she’s been such a force that she could hold the #1 spot for weeks to come, even without racing.
2. Katerina Nash (Luna)
Since Compton left for Europe, Nash has filled in for her nicely. Nash has been untouchable, and her only “losses” have come in the form of second place finishes to, whom else, Compton. Nash scored both wins in Louisville against some good competition (mostly that of her own team) and if she’s on, she won’t be beaten. She should also be able to hold on to the USGP lead to take home consecutive overall titles.
3. Georgia Gould (Luna)
Gould was a bit off her best while she was in Louisville, and could only muster a fourth on Sunday after a second on Saturday. Gould, however, still is the closest American to Katie Compton, but it looks like the gap to Compton is widening. Still, Gould is an extremely gifted rider, and she should take home a few wins as the leaves continue to turn
4. Alison Dunlap (Luna)
After taking a hiatus from the sport, Dunlap is getting back to the level that propelled her to all her past success. Dunlap was a bit slow to shake off the rust, but a fourth place and a third place over the weekend in Louisville, plus the memories of the Alison Dunlap past propel her to fourth on the list. We can no doubt expect a podium or two from Dunlap this year.
5. Amy Dombroski (RGM Watches-Richard Sachs-Radix)
Dombroski makes it two new riders on the Richard Sachs squad on the list, proving that Richie knew what he was doing when he brought some fresh faces to the team this year. Dombroski was the only one able to break the Luna stranglehold on the Derby City Cup, and at the tender age of 22, she’s only getting faster. Dombroski is without a win yet this year, but if she’s back in New England, she’ll be climbing up the podium in no time.
6. Alison Sydor (Maxxis-Rocky Mountain)
Sydor, the Canadian Champion has yet to break through with a real powerful performance this year, but she’s been in and around the top five with good consistency. Sydor, much like teammate and co-Canadian Champ Kabush, is a mountain biker by trade, so ‘cross is her off-season work, but she’s making the best of it, and has the maple leaves to prove it.
7. Natasha Elliot (Garneau-Club Chaussures-Ogilvy)
Elliot is the NACT leader at the moment, and has a slew of wins to prove her pedigree, but she tends to suffer a bit in the mud, and third places are not what you’d expect from a major series leader. Elliot’s wins, it can be argued, have come against less than optimal competition, but she’s definitely able to mix it up with the best, and she will likely end the season with the NACT and NECCS overall jerseys.
8. Maureen Bruno Roy (MM Racing p/b Seven Cycles)
Maureen, more than most, is rewarded and punished by variable course conditions. Bruno Roy rises to her best when there’s lots of mud to be found, and two wins at muddy Downeast Cyclocross events in New Gloucester, Maine, prove that she’s a cut above when the course is loose. She’s finding her stride at the right time of the year.
9. Laura Van Gilder (C3 Athletes Serving Athletes)
Van Gilder took the last weekend off, but she would probably have fared well in Louisville. Despite this only being her second full cyclocross season, Van Gilder has improved by leaps and bounds so far. Van Gilder’s abilities in the mud are coming along nicely, and if she’s close to you on the final straight, expect to lose one finishing position.
10. Sue Butler (Monavie-Cannondale.com)
Butler’s finishes in Louisville were uncharacteristically low for a rider of her caliber. She’s a level below the front of the field, but she’s fast enough to keep up on a good day. Butler has good technical skills but the top end speed doesn’t compare to that of the heads of state. Butler will move up the list if she can right the ship and get back to the top five. 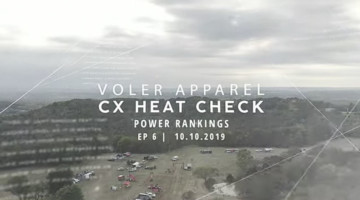