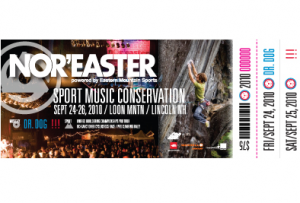 New Englanders have the opportunity to kick off this cyclocross season in grand style with Nor’easter ’Cross at Loon Mountain, New Hampshire. The UCI-sanctioned race itself sounds like a winner, but that’s a small part of what’s on offer. Try this on for size: 13 badass bands, free camping with admission, pro bouldering competitions, climbing clinics and even a free fun trail run. The EMS Outdoor Festival, a celebration of Sport, Music and Conservation, runs September 24th through 26th, with the cyclocross race smack dab in the middle both temporally, on Saturday, the 25th, and physically, as the course wends its way right through the middle of the festival’s base camp and main stage.

We at Cyclocross Magazine are huge fans of integrating races into larger events. Not only does it mean more fans at that single event, but once new folks get a gander at the glory that is ’cross, it also inevitably draws more interest and participation towards the sport. Plus – no offense – it gives us all the chance to hang out with people other than just bike racers once in a while and, in this case, to get our groove on.

I talked to course designer and cyclocross stalwart Adam Myerson, who also runs the Cycle-Smart International race in Northampton, MA., and event promoter Pete Ward to get the inside scoop of what to expect from the event.

UPDATE: The Elite women’s prize list will get a hefty bump, with the top 15 women receiving payout equal to the top 15 men. The goal is to increase women’s participation and to help support the top talent.

Adam, you typically do everything from race logistics to course design to promotion. It must be a relief to be able to focus on just putting on a good race? Tell us how that has been so far (or how you anticipate that process to be). What can we expect from the course?

Adam: I’m using the same crew as I do for Northampton [Cycle-Smart International], so that certainly makes things easier. They all are very good at their jobs at this point, and I really just have to direct and do a lot of the up front work. The fact that I’ve been hired as a subcontractor here, rather than owning the event, has some pros and cons, but so far, mostly pros. The financial pressure of searching for sponsorship is removed, and that’s never been my strength. It does allow me to focus on the course, logistics and catering to my customers, AKA: the racers. What’s different is that I have to balance those needs with the needs of the event as a whole, and really change my perspective on what a ’cross race can be. Pete has a very big vision, and there are a lot of considerations. Learning about what I need to do to make his event successful overall has been a new challenge for me.

The course, being that it’s in the basin of a ski area, is very difficult. It’s shaped like a half-pipe, more or less, with steep climbs at either end, separated by fast, flat sections in the middle. All of the course winds its way through the festival, so there will be literally thousands of spectators on the course. One end even winds around the concert’s main stage. The race is going to be unique in every way.

From the prelim schedule that I’ve seen, it looks like the Elites are midday, with the two Masters racers categories coming at the end. Why did you structure it like that?

Adam: This isn’t a normal ’cross in that it’s part of a bigger entertainment package, and we have multiple events to work around. We needed the feature ’cross events finished before the finals of the climbing competition, and before the headlining bands took the stage. It’s been great, actually, to have some freedom to structure the day in a non-traditional way.

As an outdoorsy-oriented, multi-day event, I assume there will be plenty of camping opportunities for racers?

Pete: Camping is available to festival ticket holders and one a first come, first served basis, which means it’s moving fast. You can get festival tickets when you register at Bikereg.com, and there’s a $20 discount for athletes and friends of athletes. We really appreciate the willingness of Adam and the greater ’cross community to join us, and we wanted to extend that offer as a small token of our appreciation to the athletes for being part of the show.

That said, don’t panic if you miss the boat or don’t care to hang out and see the Main Stage. We’re right in the middle of the White Mountain National Forest, so camping and hotels are everywhere.

The event is September 25th, really right as ’cross season is heating up in New England. What other nearby races can participants hit, if they still have energy after racing, then rocking out Saturday night?

Adam: With the Mayor’s Cup Criterium in Boston on Sunday, and Suckerbrook ’Cross in NH, I think we’re going to see a lot of riders making a big weekend out of it. The best approach is to get a hotel in Lincoln, stick around to watch the show once the race is over, and then head to NH or Boston Sunday morning.

I know there are a bunch of bands as well as other non-cycling activities on tap at the EMS Outdoor Festival. Can you give me a run-down of what to expect?

Pete: Yeah, The Nor’easter’s got a lot going on. Staying on the Sport side of things first, the rock climbing pro tour, the Unified Bouldering Championships are having the 2010 tour championships at The Nor’easter, and that will attract the best climbers from around North America and even worldwide so that will be cool. My roots are in climbing and our company, NE2C Productions has worked hard to build that sport, hopefully with the same dedication that Adam has for ’cross. You can learn more about the UBC Pro tour at www.boulderingcomps.com

Any of your personal fave bands taking the stage (I know Adam mentioned “Chick-chick-chick” – I confess to having no idea who that is) or big names we should look out for?

Adam: It’s true; I’m a big fan and was pretty excited when Pete landed them as one of the headliners.

Pete: Man, I like em all…. I guess that’s the issue with booking your own festival! If I had to pick a few out: Obviously having The Gaslight Anthem is great, but on the lesser-known side of things, if you like to get your soul-groove on, I’d say watch out for Eli “Paperboy” Reed and the True Loves. Another band I’m really psyched about is The Constellations. They’ve got a great funk vibe and were recently called out by iTunes and Paste magazine for being “the next big thing.” But, man, we’re lucky most of the bands at The Nor’easter have new albums out in 2010, and they all rock. Heaviest on my playlist lately has been The Walkmen who just got rave reviews from NPR. If you’re interested in the sound of any of these guys, there’s a music player on the festival website, www.noreaster.ems.com, and you can check the music out there. There are 13 bands across two days – not a bad deal for $55, if you don’t mind me saying so.

Will you do anything to lure the climbers or music spectators onto the course to give cyclocross a whirl?

Adam: Since this is our first run through, I’ve been mostly focused on putting on a good show for both my racers and the potential spectators. I think there is almost limitless possibilities to bring ’cross to new people with the event, so perhaps once we see what’s possible, we’ll start to look at more development opportunities like that. This year, I just want to run a solid race.

Any of the NE superstars committed to making the race? Adam, you gonna go out on a limb and predict an early season “W” from your own event?

Adam: Even if I wasn’t the organizer, I would have very little chance of winning this race. It’s way too hard for me, I predict. I will definitely take the start line, though, because I think it’s the best way to know how your race rides from your customer’s perspective. If I know how it feels to race it, I can keep tweaking the course in the future. We’ll release a start list as we get closer to race day.

Who are the main sponsors and what are they bringing to the event?

Pete: We are lucky to have many, many great partners for the Nor’easter. Of course, SmartWool, High Gear and Eastern Mountain Sports are specifically supporting cyclocross at The Nor’easter, so  participants: please let them know what you think about the event if you see them at the race.