TEMECULA, Ca. – The third round of the 2013-14 SoCalCross Prestige Series was cool. Not cool in the meteorological meaning of the word, although it was that. Unlike the sweltering conditions suffered at the first two events on the calendar, this one was refreshingly comfortable.

Rather, this event was cool in an aging hippy, sang-froid, wry-smile-and-slight-head-bob sort of way. Never before utilized in the eight-year history of the series, Vail Lake Resort presented a comfy/funky setting and vibe that was embraced by all. Lake views, a sandy beach, rolling hills and acres of carefully manicured sod made this last-minute addition to the schedule a true revelation.

How often do you encounter numerous dinosaur [sculptures] roaming a racecourse? If ever the term “instant classic” could be used in a way that does not turn it into an oxymoron, this was it.

Course designer Jeff Herring made full use of all the varied terrain available at this private facility. This included long hauls over lush, deep, wheel-snagging grass, a couple of tricky turns on the beach, a wooden walkway and more elevation changes than Six Flags. It was a toughie, but it was cool. (And quite breezy after lunch.)

Making it look easy were the front-runners in the Elite Men’s class. Holeshot honors went to series interloper Bryson Perry (DNA Cycling), who lives in Utah but was in town for work. By the fourth lap the field had strung out considerably with four riders getting away at the sharp end: the Gritters brothers, Perry and Siegle. Greenberg and Lundy were dueling amongst themselves a few seconds back, with Prenzlow chasing hard after a flat and a bike change.

Some consistently hard riding on the front by Siegle and then a couple of surges by Brandon Gritters just after the halfway mark took a toll on Kyle Gritters and Perry. In short order it was clear that either Brandon Gritters or Siegle would be on the top step of the podium.

According to Gritters, a dominant winner at the first two series events, “Jason and I rode around together for the last few laps. I was just hanging on hoping I would be able to get to the top of the last hill first, but he was able to power away on that long drag up. I got close coming back down but I ran out of time. It was a little different than the last few weeks. It was good to be able to actually race, to be able to fight with people. It’s fun. It makes it a little more exciting.”

“The last half lap or so, it was a pretty good battle,” said Siegle. “I just knew I had to have some time at the top of this last climb so he couldn’t come in and chop me or do something silly in the turns coming back down to the finish straight. I knew once I got through the last corner in front it was pretty much a done deal.”

Kyle Gritters was the best of the rest and rolled in solo for third, while Perry held on to fourth ahead of a rapidly closing Prenzlow. Lundy and Greenberg were the only other riders to stay on the lead lap, with Lundy prevailing.

The earlier Women’s Elite battle was much more decisive. Nicole Brandt (LaGrange/Michelob Ultra) led into the sandy first turn and then nearly endoed, creating a bit of havoc behind. Former series champ Christina Probert-Turner (The TEAM SoCalCross) emerged first, followed by Hannah Rae Finchamp (Luna Chix). It was a battle for the ages: a 46 year old against a 17 year old. As Turner stated later, “I’ve got my Depends on while they’ve got their diapers on.” 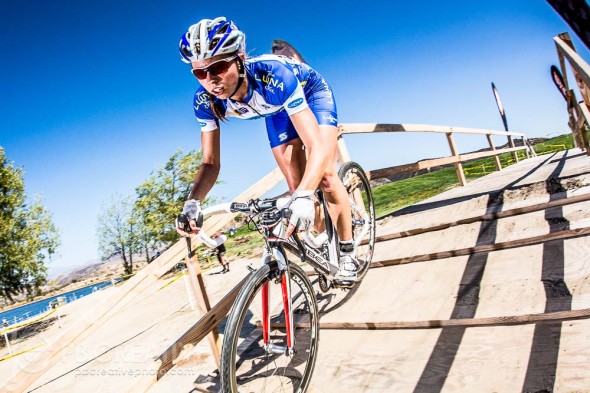 The skirmish lasted only a lap as Finchamp shot around the outside of Turner entering the sand, rode it cleanly and was gone. Using this race as training for the upcoming XTERRA World Championships, Finchamp powered away confidently to top the six-lap race by over a minute and a half.

“I’ve been training pretty hard, just making that last push for Worlds,” said the high school senior. “I’ll start my taper next week. I feel really good. I feel really blessed for it all to be coming together right now, to gain that confidence before Maui.”

New mommy Brandt recovered quickly from her first turn troubles and moved up to challenge Turner for several laps, then pulled away for a comfortable second place.

“I did almost faceplant in that sand after the start,” she said with a laugh. “Thankfully I held it up, but something happened and my front brake was rubbing the entire race. I had to just catch [Turner] at my own pace, just try to keep her in my sights and little by little get her. She was stronger than me on the steep climb so I knew going in that I really had to push hard. Finally I was able to muscle it out a little bit and gain a little gap on her and hold it.”

Maddie Melcher (The TEAM SoCalCross) was a lonely fourth, and Amanda Schaper (Ritte CX) rounded out the top five.

Round four of the SoCalCross series takes place on Saturday, October 19, in Camarillo, California.

Next post Cyclocross Debuts in New Orleans This Weekend