On a beautiful fall Saturday in the Northwest, racers descended upon Magnuson Park on the shores of Lake Washington outside Seattle for race number five in the MFG Cyclocross series. A fast course with a little bit of everything thrown in hosted some of the tightest racing of the year as lead and chase groups would form right out of the gate and the battles would come down to finishing sprints.

Reminiscent of most of the races this year, a group of six ladies got away from the gun in the women’s elite race and had the opportunity to win. Jenni Gaertner (Raleigh), Jessica Cutler (Cucina Fresca), Mel Lewis (CycleU/PopCap), Emily Eggers (Blue Rooster), Kristi Berg (CycleU/PopCap) and Beth Lyndon-Griffith (Recycled Cycles) would all be in the hunt as the race came down to the final lap. Gaertner looked poised to take another win but bobbled late in the last lap opening the door for Cutler to take the win. Lewis would take second and Eggers would snap up the last podium spot in a mad dash for the line. All told, the top six ladies would only be separated by 14 seconds showing, again, how tight the women’s racing is this year. On the men’s elite side the racing would be similar as a group of seven gained ground on the field by lap two. That group, led by Zach McDonald (Rapha Focus) along with Adam McGrath (Van Dessel), Steve Fisher (Revel Consulting/Rad Racing NW), Carson Miller (HSP/Untouched World) and Kevin Noiles (Sportique) would be the rabbit group all race long. Gian Dalle (Rio Blanco) had some contact with the lead group through the race but John Christian Flack (Olympia Orthopedic Associates) would be just behind chasing for the duration. With long, flat, fast sections attacks were a commonplace, but nothing stuck. By the bell lap the field would be whittled down with only Adam McGrath able to hang on to Zach McDonald. The Rapha Focus rider would go on to take the easy win in the sprint over McGrath and Noiles would solidify his good day with third place finish.

MFG will conclude its season series on November 13th racing at the classic urban setting of Woodland Park. We’ll have a full report plus a wrap up of the Single Speed team competition, which has the losing team washing the winning team’s bikes in bikinis post race and then footing the bar bill. Should be a lot of fun!

Previous post The Girl with the Cowbell Tattoo: P.S. There Will Be Blood (and Mud) 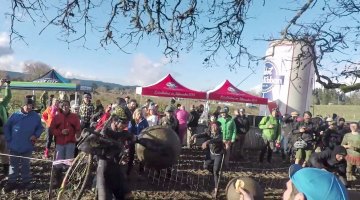