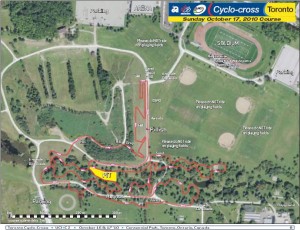 Davide Frattini (Hudz-Subaru) went back-to-back in Toronto, but Sunday’s win on a flatter, more technical course proved more challenging for the Italian rider who was able to use the hills in Saturday’s race to separate himself from the fray.

Derrick St. John (Garneau-Club Chaussures-Ogilv) and Andrew Watson (Norco Factory Team) hung tough until the very end, and Frattini and St. John traded attacks throughout the event before Frattini was able to get a gap late. St. John, who raced aggressively, suffered a bobble in a corner on the last lap, which provided Frattini all the room he’d need. Watson claimed third in front of Mark Lalonde (Specialized).

In the women’s race, Natasha Elliott, the 2009 NACT series champion continues her comeback from illness and improved upon yesterday’s second place by turning the tables and snagging the win in front of mountain biker Katy Curtis (Cmc/Bow Cycle). Pepper Harlton (Juventus) again took third, 27 seconds behind Elliott’s pace, and a full 1:30 in front of Melissa Bunn (Stevens Racing P/B The Cyclery) in fourth.