The next time you’re about to make excuses consider this: Ellen Van Loy, ranked sixth in the world, works a full-time job helping people with Down’s Syndrome, and took a bunch of her vacation just to make the race in China. Squeezing in training and racing in her spare time, she won the UCI’s season-opening cyclocross race, the Qiansen Trophy Race, held in China on August 30.

The former volleyball player only started cycling seven years ago, at the age of 27. She has enjoyed a fast rise to the top, achieving impressive results including 9th and 12th place finishes at the World Championships in 2013 and 2014, and a fifth and two second place finishes at the Belgian National Championships in 2012, 2013 and 2014 respectively.

Ellen Van Loy (Telenet – Fidea) was in control from start to finish at the 2014 Qiansen Trophy Cyclocross Race in China. © Cyclocross Magazine

Van Loy will be returning for the 2014 season to ride with the Telenet Fidea Cycling Team. Cyclocross Magazine caught up with Van Loy while in China to take a few close-ups of her and her winning Ridley X-Night.

The 2015 X-Night Van Loy rides is Ridley’s top-of-the-line cyclocross bike, which is offered in either cantilever or disc brake configurations. In Van Loy’s case, as with many fellow Europeans, traditional cantilever brakes were the stopping component of choice. Van Loy opts for the Avid Shorty Ultimate brakes, run low-profile both front and rear to prioritize stopping power over mud clearance. 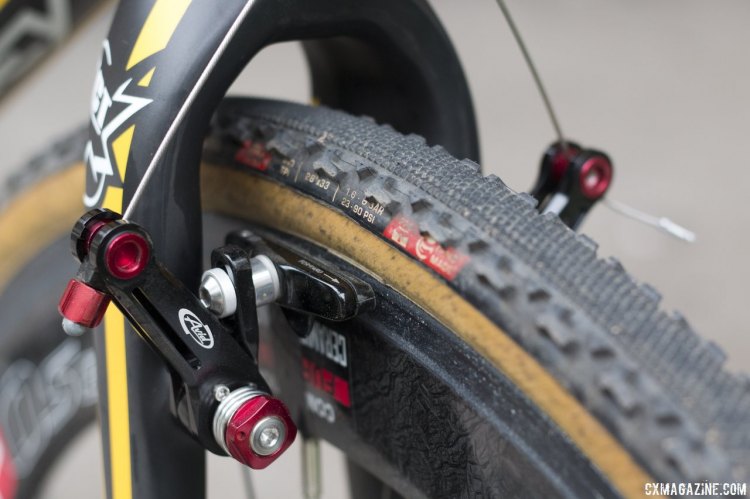 Edco 58mm Oseous wheels are matched to Challenge Chicane tires and Avid Ultimate cantilever brakes provide the modulation. The Telenet-Fidea team does not have a tire sponsor, so riders are free to choose, and buy, the tires of their choice. Van Loy had standard Challenge Chicane tubulars, not the Team Edition versions, but admitted to having a connection so she doesn’t have to buy them at full retail. The wood relief on Van Loy’s carbon rear wheel is something we don’t see all that often, but interesting nonetheless. The wood finish on Van Loy’s Edco rear wheel is a departure from the norm. © Cyclocross Magazine

Finishing off the bike is a Fizik Arione Donna saddle and Shimano XT M780 pedals.