ASHEVILLE, North Carolina—Mirroring the new combined Women’s Youth field the UCI implemented for this year’s World Championships, the USA Cycling Cyclocross national Championship race featured a combined field race with titles on the line for women age 19-22 as well as 17-18. 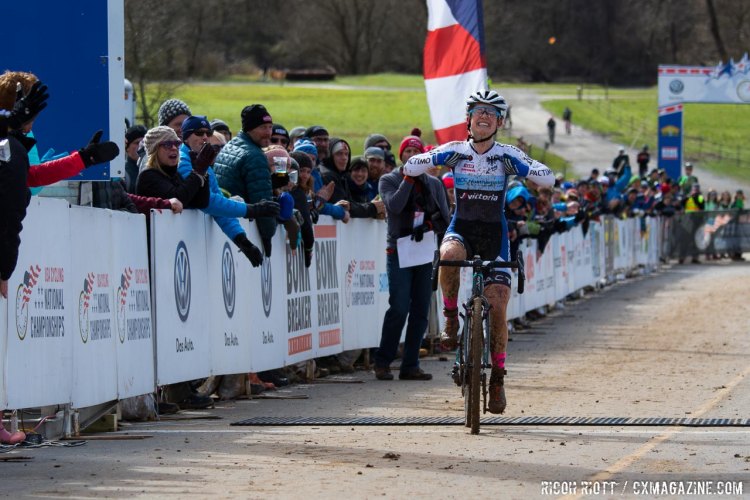 For the older group of riders today’s race was the battle that everyone anticipated in the preceding days. Ellen Noble (Jam Fund/NCC/Vittoria) versus Emma White (Cyclocrossworld.com). What nobody could guarantee as the riders tore of the start was which racer would take the 2016 Women’s U23 title. Within the same field all eyes were on Hannah Arensman (Twenty16 Pro Cycling) to see if she could take the 17-18 gold medal.

From the start it was Noble off the front but White quickly bridged and made the pass and the race was on. From that point the pair traded attacks and tested each other. As another rider looked set to spoil the party—Sofia Gomez Villafane, who won the Women’s Collegiate D1 race earlier this week.

Gomez Villafane was the second to last rider called up in the 38 strong field. But she wasted little time in getting to the sharp end of the race. While Noble and White sparred, Gomez Villafane rode to the pair and then made the pass on White once she had been gapped by Noble.

“I started pretty fast. I wanted to ride my own pace and ride my own lines,” said Noble. “[White] ended up bridging up and passed me on the run up,” she added “I thought about letting go of the race and trying to stay with her but I knew if I was patient and didn’t push it and end op crashing I could pass her back.”

It was on the course’s back side on a straight that Noble made the pass. “I knew if I could lead going into the switchbacks going into the scary woods section I’d take the lead because I felt very confident and that’s what happened.”

From there Noble rode one lap at a time and came home for the win. For her part, Gomez Villafane held second, 37 seconds back with White another 14 seconds back. Laurel Rathbun (Raleigh-Clement) and Hannah Finchamp (LUNA Pro Team) rounded out the podium for the 19-22 group.

Scroll down below the results to see images from the race.