Yesterday, we featured an interview with American cyclocross racer Elle Anderson (Whatever Happened to Elle Anderson), who raced a full season in Belgium last season, but skipped out on this season’s CrossVegas World Cup and hasn’t raced since last season. In the interview she alluded to a late-season return to racing and Europe this season. Now it’s official, as Anderson officially announces her program, plans and sponsors. See the full press release below.

Elle Anderson is launching her own cyclocross program for the 2015-16 campaign with the support of SRAM and Strava, as well as racing for USA Cycling in select European races. Last year, Anderson raced the full 2014-15 European cyclocross circuit for the Belgian-based Kalas-NNOF cyclocross team. She gained valuable experience racing against the best in the world, but this offseason she realized that she needed some extra time to recover, and therefore will not start racing this year until November.

“I learned a lot last year, racing and living in Europe was great experience, but it definitely took a lot out of me.” Anderson said, “After taking the necessary time to recover and reflect, I couldn’t be more excited to start training and racing again, and I’m really happy to have such great support this season.” Elle Anderson’s new jersey, as part of her own cyclocross program, sponsored in part by Strava and SRAM.

For the third season, Anderson will race on SRAM Force 1 components, Zipp wheels and Quarq power meters. Alex Wassmann, Road Sports Marketing Director for SRAM, comments “Elle’s accomplishments in cyclocross go well beyond results. She has continued to expand the potential for Americans in Europe as well as as athletes that work full-time. She defines hard work and discipline and that represents our brand perfectly”.

Strava, her current employer, will continue to be involved in her cyclocross racing, allowing a flexible work schedule in the fall and winter. 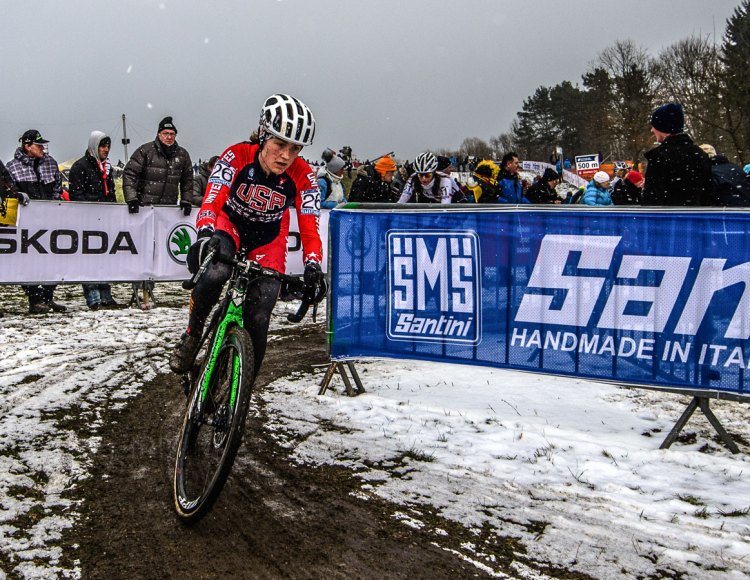 Anderson representing the USA in Europe last season, and she hopes to return again with the support of USA Cycling. photo: Tom Prenen

“Strava is passionate about cyclocross and women’s racing and we are stoked to be able to support Elle as she competes at the highest level of the sport in the US and Europe for the 2015-2016 season,” says Strava cycling brand manager Andrew Vontz. “We’ll be using the Strava platform to share some of Elle’s insights about cyclocross culture, training and technique throughout the winter months that will benefit cyclocross racers of all levels.”

Anderson will also be supported by Challenge tires, Cuore of Switzerland, and City & County Bicycle Co. Connecting with her roots, the Vermont native will be fueled by Untapped Maple products.

Anderson will return to Europe in December with USA Cycling, in time for the Christmas block races and World Cups. But before then, she’ll ramp up her season in the U.S., staying close to her current home base in San Francisco. Still keeping her schedule flexible, she’s targeting a repeat of her 2014 podium at US National Championships, and she hopes to finish the season strong in January with the final two World Cups and World Championships, to be held in Zolder, Belgium. Elle Anderson to ride for her own program, sponsored in part by Strava and SRAM. photo: Jason Perry

“Regardless of the highs and lows last season, I’m grateful I got the opportunity to be based in Belgium,” Anderson said, “After some time off the bike this summer, I’m now in a much better place mentally and physically. I’m ready to get back to work and take all the hard-earned lessons with me.”