The Cyclocross Apprenticeship: Covering Cyclocross Worlds and Improving as a Belgian ‘Crosser

I had the opportunity to try my hand at cycling journalism with Cyclocross Magazine at Valkenburg Worlds, collecting interviews and covering the scene and racing on Twitter. And what an opportunity it was!

I really didn’t realize until I arrived on site and picked up and slipped on my credential, what it meant to me to be involved in our sport’s “big dance.” Growing up as a ski racer, and now moonlighting as a cyclocrosser, I’ve always held the World Championships in the highest regard. I was surprised by how rewarding it was to be part of Worlds in a non-athlete role.

I spectated at Louisville Worlds, so I was initially a little nonplussed about attending Valkenburg Worlds. I mean, how different could it be from a European World Cup? 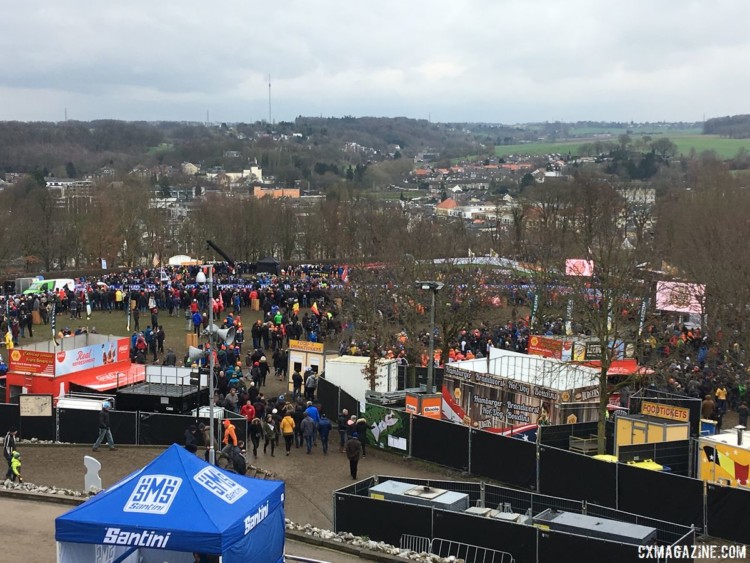 Actually, it was at least two times the Zolder World Cup and four times Louisville in size, scale and energy. All I can say is, go!

If you are a cyclocross fan, make it a priority to save the money and attend a Worlds in the sport’s heartland. It’s really impossible to capture the scope and mayhem of the experience — the throngs of people, the mud, the falling-down drunkenness — in mere words.

To try to capture what it was like, an hour before the Men’s race, down in Valkenburg, well below the course on the Cauberg, one could hear waves of sound booming from the venue as cheers erupted. I assume it was much like the Superbowl, not that I have ever been to one of those! A look out at Valkenburg from atop the Cauberg. Corey Coogan Cisek rider diary. © C. Coogan Cisek / Cyclocross Magazine

Covering Worlds as a Journalist

During the race and immediately after, my role was to stake out a place in the press “mixed zone.” The mixed zone is a trailer that, in theory, all riders must walk through to exit the finish area. In practice, there proved to be fencing gaps that allowed some riders to knowingly or unknowingly skip the mixed zone. Within the trailer, the video media got the prime section — the first three-quarters of the space — and the print media got the final quarter. Initially, all riders outside the top-three made their way through the zone. After the top three finish with the podium presentation, they were also ushered through. These three are attended to by UCI press officials, who ensured they move quickly enough to stay on schedule for the press conference that follows.

By the time the top-three made it to the print media, they were pressed for time, and the UCI official was allowing just one question. I will admit it was a cool experience getting to ask even one question of Sanne Cant and Wout van Aert.

What struck me most was the humanity of the riders. One-on-one, Sanne came across as genuinely delighted, and perhaps even a little surprised, to reclaim the rainbow jersey. She literally grabbed ahold of and rubbed the jersey when she told me she would sleep in it.

Conversely, I didn’t much like having to ask Mathieu van der Poel essentially “what happened?” As an athlete myself, I understand what it feels like to underperform. He briefly mumbled something about Wout being the stronger rider on the day, and looked down at his feet. It was awkward to ask, but I kept in mind that he is a professional. Perhaps most interesting were the tactics employed by younger riders to try to avoid interviewers. A certain British lad who underperformed in the U23 race, sped through the trailer on his bike, banging into the wall and nearly taking out a couple of people in the process.

Part of what I learned was about the role of the media. In U.S. cyclocross, one’s media presence is likely more important than one’s result. Speaking to the media is a rider’s opportunity to get her name and thoughts out into the world. The consummate professionals, for example Stephen Hyde and Helen Wyman, know this. They got into dry layers and stayed in the mixed zone long enough to ensure that anyone who was interested in speaking to them got a chance to do so. World Cups and Worlds are a bit unique for the American audience. If you are outside the front group of riders, you receive no television time, and your fans can only follow the live timing to “see” you race. In a country where people contribute to GoFundMe campaigns to send riders to Worlds, we are likely to feel “invested” in our riders, whether they are fifth or fiftieth.

I tried to speak to as many Americans as possible in the mixed zone, so as to at least get their comments up on Twitter. Based on my experience at Worlds, I would recommend teaching developing riders to linger at the finish long enough for any reporter to flag them over for an interview. The content they provide keeps cycling-focused media in business and the publicity benefits the riders and their sponsors.

Media Center Salami and Some Stress

Worlds was part of a period of time where I put too much on my plate. Travel to the Nommay World Cup was a bit of a stressor in the form of a six-hour drive each way, navigating France without knowing French and less than ideal eating.  Then I did a hard training block between Nommay and Worlds, including getting caught out in a cold rain a couple of times (’cause this is Belgium).

Worlds meant staying in an affordable AirBnb a long way from the venue, long, cold days and odd and frenzied eating between events (usually a media center white bread and salami sandwich). I probably haven’t eaten as well as I should have over here. Knowing the constraints of my budget, fresh veggies and fruit seemed scarily pricey, so I haven’t kept myself fed as well as I would have with a steady income.

On top of the less-than-ideal eating, I caught a head cold. I tried to train through it. Yet, the morning of the Parkcross Maldegem race, I woke up, and said, “Who am I kidding here?” I skipped Maldegem and spent the morning trying to sleep off my cold.

On the Sunday of Worlds, my mother and step-sister arrived for a visit.  Then on Wednesday, when we were supposed to be in Maldegem, my mother slipped on some ice, wrenched her back and we spent six hours in the hospital, getting an in-depth introduction to the Belgian healthcare system.  Mother just pulled some muscles, but she was quite sore, and only able to spend the rest of her vacation on the couch.

Since she and my sister were staying in Gent, I rushed home to Aarsele, gathered my things in a frenzy and moved in with them in Gent.  For the remainder of her trip, my step-sister and I balanced care giving for mom with my sister’s sightseeing and my racing. I coughed and sniffled my way through it all. It’s safe to say that the train that is my fitness, form and happiness was scarily close to coming off the tracks. It hasn’t been all lows. I was lucky enough to pre-ride the Lille IJsboerke Trofee course with Helen and Stef Wyman several days before the event. This was, to put it mildly, a highlight of my trip thus far!

While we all know that Helen is freakin’ fast, it’s not just that. Spend a few moments listening to Stef and Helen and their knowledge of cyclocross becomes abundantly clear. It’s one thing to be fast, but it’s a whole other to be a student of the sport and to have the ability to conceptualize and explain skills. In 90 minutes, I learned a ton and came away inspired to learn the many things I do not know. With this on-course skills session in my back pocket, I came into Lille with a lot of confidence.  It was so refreshing to approach a course with knowledge of how to best ride each section. Despite my preparation, I made a mess of the Lille race. I learned that while I am now able to ride sand ruts somewhat skillfully when rested, I cannot yet do it at race speed with fatigue.

The race was a series of “taking myself out.” It’s one thing to not have the power to go when a rider attacks or to have another rider gap you by riding more skillfully. It’s quite another to gap yourself off by plowing into yet another sandbank. As I fell further and further back in the field, I felt very much like “the American idiot.”

If you remember, my stated goal for this trip was to learn to ride Belgian cyclocross over the course of the season. With less than two weeks remaining here, that goal is proving laughable. I’ve had to reset my ambitions for this season.

The Hoogstraten Superprestige is a special race for me.  It was at that race two years ago, on a short trip here, that I came up with the wild and crazy idea — what if I were to go to Belgium for a season?  Naturally, I remember the exact moment and place in the venue where that idea crystallized in my mind. Arriving at Hoogstraten last weekend, I did allow myself a moment to reflect on the fact that I had really done it.

Having raced Hoogstraten before, it was an opportunity to see if I learned anything at all during my months floundering over here. The Hoogstraten course is approximately one-third mud and wet, clay-like sand. I reaffirmed the same thing that I learned at Nommay; I have not trained to handle very long efforts at very low cadence. That’s physiology that will probably take a year’s work to develop.

However, I was a great deal better at the ruts, running, and making run versus ride decisions than I was two years ago. Nearly, but not quite, finishing on the lead lap was certainly not the result that I was looking for. However, at least, comparing Hoogstraten side-by-side with two years ago, I can see that I’ve learned some things in my time here! With less than two weeks remaining before I return to the States, I am certainly hearing the clock tick. I am working on getting healthy and hoping to wring the slightest bit of form out of my legs next weekend. I’ve abandoned all results goals and am solely focused on executing to the best of ability; this place has proved tougher than I ever imagined!

In the meantime, I’m trying to enjoy all things Belgium one last time, including planning the pastries and frites I’ll indulge in as last-race reward.

To hear more about Coogan Cisek’s experiences racing in Europe, see the archives of all her columns.