I love the course at Bredene. It’s subtly technical and always has a mud-section that calls for on-the-spot ride versus run decisions. If you rewatch that race, pay attention to how Blanka Kata Vas wins. I’d argue it was her dominant riding on the technical up/down section. Each of those rollers has sizable ruts at the bottom. The only way to crest each bump is to ride the preceding descent full gas and commit to the rut. This tactic gets Kata fully over every one of the bumps and uses less energy. Unfortunately, I am not sure I will remember 2020 Bredene for what happened on course. Instead, Bredene was record-setting for the parking.

We were forced to move our vehicles twice and three times threatened with “calling the police.”

Bredene was an odd exception to this year’s “COVID-norm” in that the race was held in town. It was city street parking on an enclosed, blockaded street. Upon showing our wristbands signifying completing COVID protocols, we were allowed to pass the blockade.

Kind of an odd year: Citizens were in the unusual position of having their street closed for an event they could not attend. Perhaps they were less happy hosts?

Until Bredene, we believed parking attendants were associated with a single race, doing their once a year “civic duty.” Perhaps not, as it appears we have found at least one “career parking guard.”

Remember my friend in Boom, who took his mask off to have a smoke next to me as I warmed up?

Yup, he reappeared in Bredene. He was quite eager for us to move and repeatedly indicated his willingness to call the police.

It’s comical, really it is, until you realize it’s starting to cut into your race day prep.

In Belgium, race parking is a class system: UCI teams and wrapped campers at the top, individuals and smaller vehicles at the bottom. As my mechanic puts it, “That’s just Belgium.”

The organizers in Gullegem are earnest.

Legend (and likely truth) has it that the race was born when a group of friends gathered at a bar for drinks.

Relative to most races on the Belgian calendar, this one is an upstart. It has been a UCI race for just three years and it’s not part of a series. It’s clear that organizers want to grow the race.

Gullegem wins the award, hands down, for best organization. Parking passes were sent to us a couple of days before: print, enter, park—seamless. COVID protocols were thorough and organized to the nth degree. My favorite? The individual who controlled the queue was tri-lingual (Dutch, French, and English) and explained the process in our preferred language.

My teammate Michelle Geoghegan’s astute takeaway: “It feels like they want us here.”

Yes, teammie, it feels kind of good, doesn’t it?

The course is also, um, emerging. It’s fun, but it’s not particularly challenging, technically or physically.

This actually works well for the end of Kerstperiode. By Gullegem, we are cracked. We’ve definitely hit the point of, “This does not need to be any harder than it needs to be.”

Hulst has been fortified against invaders since the 12th century (although the current fortification dates back to the 80 Years War of 1568–1648). The fortifications are significant as the course raced up and down them, making for an extremely technically challenging course. However, notice my use of past tense. Due to Coronavirus restrictions, this year’s Verstingcross Hulst World Cup was moved out of the city.

It’s lucky that the World Cup was able to be held at all. The Netherlands is currently experiencing a surge of infections far greater than Belgium and is under full lockdown.

The 2021 Hulst World Cup was held on the coastal dike of the Westerschelde, a place best described as “windswept.” The land is entirely devoid of trees and buffeted by ceaseless damp winds. 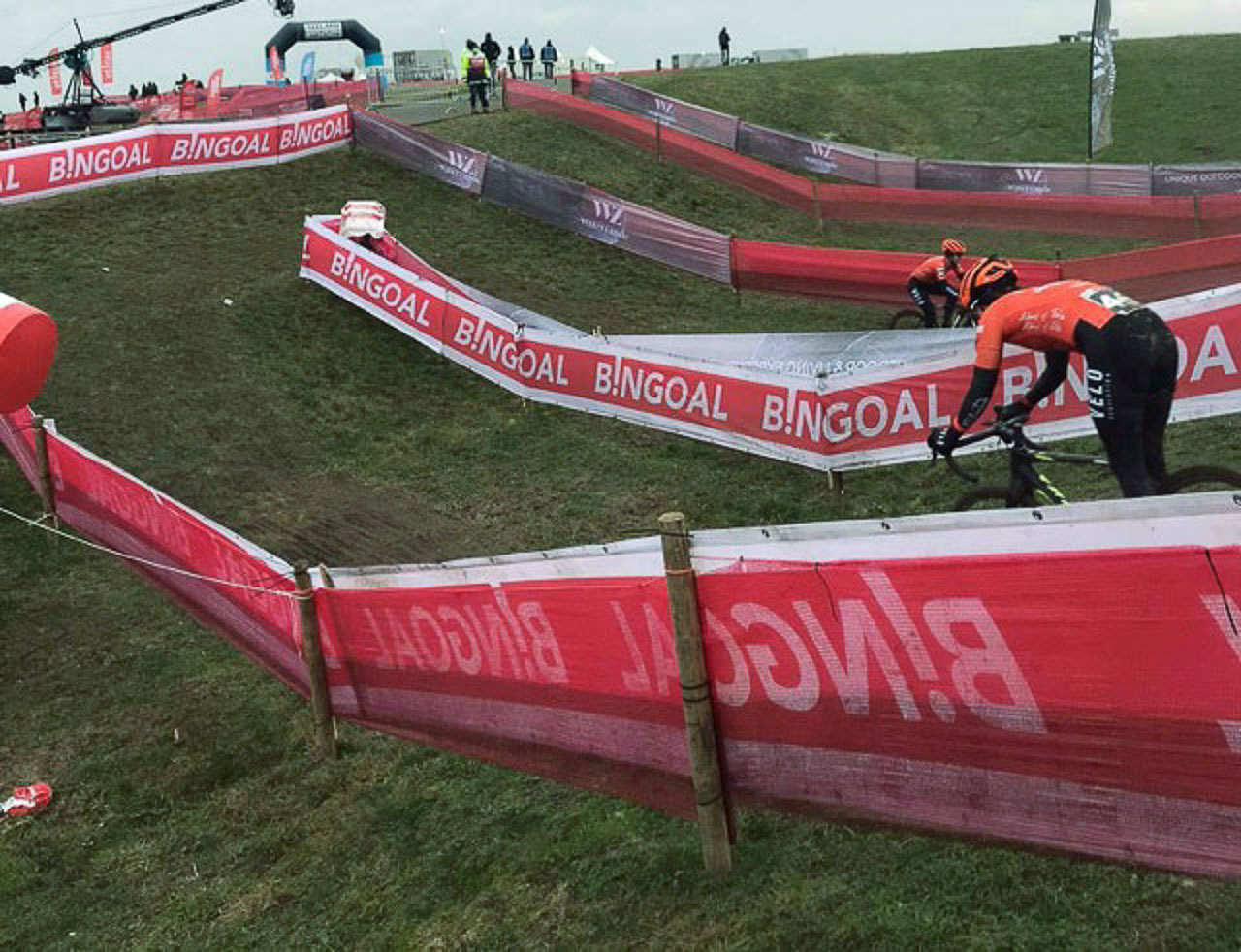 The venue, while striking, was not terribly challenging. Yet, I feel the course designer made the best possible use of the venue. There were several steep and greasy ups, one challenging off-camber and the few mud pits forced running and pitting.

I didn’t have the slightest bit of trepidation about any element of the course. That’s unusual for Belgium. Because of this, Hulst rode like…wait for it…a crit. The start was everything.

I started last row and on the back foot. While I was holding pace lap one, it wasn’t going to last. It was that rubber-band effect: We would come together on the technical features and string out between. If you were at the back, you were closing gaps, until you weren’t. Corey Coogan Cisek takes us through her Kerstperiode races and along for the run-up at Vestingcross Hulst.

I regret effectively “missing the move,” but, honestly, it was the best I could do on the day.

Riders should not make any significant decisions post-Kerstperiode. This is a time when you would be ill-advised to buy a car, to determine whether or not a relationship is worth it, to commit to…well anything.

Each year, Kerstperiode wrecks me. At some point, I become a total grouch, the moody toddler who missed a nap. I never ever see it coming, until, BAM.

The real sun? We have not seen it in five days, but who’s counting?