Boulder Reservoir, Boulder, CO – Katie Compton (Planet Bike – Stevens Bikes) and Jeremy Powers (Cannondale p/b CyclocrossWorld.com) spent their day at the Boulder reservoir, and came back with victories at the fifth race of the NACT cyclocross series. With her win over Georgia Gould (Luna), Compton remains undefeated this season, while Powers battled teammate Tim Johnson for his triumph, leaving Todd Wells (Specialized) to ride in solo for third.

With a recent wildfire simmering in the background and on the minds of hundreds of local competitors, the NACT made its fifth stop at the Boulder Reservoir in Boulder, Colorado, for the Colorado Cross Classic. Though race organizers originally thought they might be sharing their Boulder Reservoir venue with fire fighters and news crews on race day, the fire cooperated and it was game on for the 800 or so competitors that always come out of the woodwork for bike racing at one of the most respected venues in Colorado. The sand on the shores of the Reservoir is kind to those with the horsepower and skill to tackle it properly while it reduces some to a combination of whimpering and running. With C2 points on the line today, and C1 points up for grabs at the Boulder Cup tomorrow, the fields were stacked and ready to battle.

NACT Series leader Wendy Simms (Ridley-FSA) took the holeshot under bluebird skies in front of a sizable crowd. Simms was followed closely by fast up-and-comer Teal Stetson-Lee (California Giant-Specialized) and Katie Compton (Planet Bike). The trio established a gap quickly with Georgia Gould (Team Luna) and Nicole Duke (HUDZ-Subaru) chasing hard to limit their losses. One rider who finished the first lap at a disadvantage was Meredith Miller. Miller dumped it shortly before the pits, setting her up for a race-long chase for the podium. “I need to break my streak of bad races on Saturdays! I have been struggling all year and having to make up for it on Sunday,” said Miller. “One of these days, I’m going to have things go my way on a Saturday.”

At the end of the second lap, it was business as usual for Compton and Gould, who raced away from the rest of the field like they have countless times before. Duke chased hard in third, with Miller recovering quickly and making her way through the field to ride in fourth. Boulder local and crowd favorite Kerry Barnholt overcame a mid-pack call-up to race in fifth. 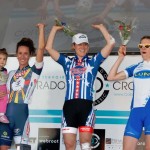 A bandaged Compton on the podium © Mark Legg-Compton

Compton would open a gap on Gould mid-way through the race and ride to victory, but her ride was not without incident. On the lap last, Compton would tangle with the course tape that was blowing into the racing lane due to the typical strong winds. The tape got tangled in Compton’s bars, sending her to the ground on the loose gravel. Compton fell directly on some lingering injuries she sustained at the Mountain Bike World Championships, and was hopeful the wounds were only superficial. “I lost quite a bit of time with the crash, but I was lucky enough that my brakes weren’t rubbing and everything shifted fine, so I didn’t pit,” said Compton. “I managed to crash on the exact same spot on my knee and elbow as World’s, so I’m hoping that I didn’t reinjure anything.” Compton hoped to start Sunday’s Boulder Cup.

Gould rode steadily the rest of the way to finish second, followed by Nicole Duke in third. Duke is another Boulder local who has been putting in strong rides at the local races, and also let her intentions be known at the Louisville USGP rounds last weekend with a pair of seventh-place finishes, and she also took home the SRAM Most Aggressive Rider Award. Duke is collecting UCI points with the end goal a solid result at Nationals in December, and she seems to be on the right trajectory to get it done.

With his “Behind the Barriers” film crew of one on the spot, Jeremy Powers (Cannondale-Cyclocrossworld.com) had his typical good start, and got out to an early lead in the Elite Men’s race. He was followed by Ryan Trebon (Kona-FSA), a quickly improving Todd Wells (Specialized), Geoff Kabush (Rocky Moutain-Maxxis) and national champion Tim Johnson (Cannondale-Cyclocrossworld.com). Powers would continue to build his lead over the first couple laps as the chase group was reduced to just Tim Johnson and Todd Wells, as first Trebon succumbed to an injury, and Kabush was dropped.

Trebon would suffer a race-ending groin pull midway through the second lap, and he pulled out of the race as the pain was too great to continue. “I felt some pain, but did not realize the severity until I dismounted for the barriers. It was super sharp, and not only could I not run them, I could barely even walk.” Trebon was cautiously hopeful that he would be able to start tomorrow’s Boulder Cup.

With teammate Powers off the front, Tim Johnson was content to sit on Wells in the first chase group until a mistake with two laps to go opened the door for Johnson to give it some gas and see if he could reel in his teammate. “I bobbled before the sand section by the water and tried to chase for a little bit, but I know Tim has more snap than me right now so I decided to back it off and ride my own race.”

With his teammate now riding solo behind in second, Powers rode a smart race and conserved enough to take the win. Johnson closed to within 11 seconds with a lap to go, but would settle for second.

Powers used lessons learned in the past racing at altitude, and metered his efforts as the laps wound down. “I have gone too hard before, so I got the holeshot and then dialed it back a little and was still gaining a couple seconds a lap, so I figured it would be enough and that was all I did instead of digging myself a huge hole to have to recover from,” said Powers. For his efforts, Powers would pull on the NACT Leader’s jersey. He now leads both major national series as he earned the USGP of Cyclcross Series leader’s jersey in Kentucky last weekend. “I said if I was leading either series I would go for it, and with the final NACT races near my house I’m pumped to try and hold on.”

Having not lined up for a cyclocross race in some 10 years, road pro Alex Candalario was the surprise of the race and turned some heads as he raced in the second chase group with Danny Summerhill and Jamey Driscoll. Candelario was racing for the World Bicycle Relief, hoping to spread the word on the worthy cause and impressed with a fifth place finish.

Also of note was Adam Craig’s insistence to ride a set of steps after the longest sand pit on the course, much to the delight of the fans hanging out in the beer tents. Craig’s efforts netted him the loudest cheers of the day as he rode to a 13th place finish.

Stay tuned as the racing continues tomorrow at a new venue near the Flatirons Mall in nearby Broomfield, Colorado. Today’s sand and lack of elevation changes will be exchanged for the power sucking native grasses and climbing that promoter Chris Grealish and DBC Events is now famous for.

Note: Grant Berry contributed this article after climbing onto the podium himself – he claimed third place in the Masters 35+ race. Like many of the Cyclocross Magazine crew, he races the sport we cover – he’s just a lot faster than most of us!