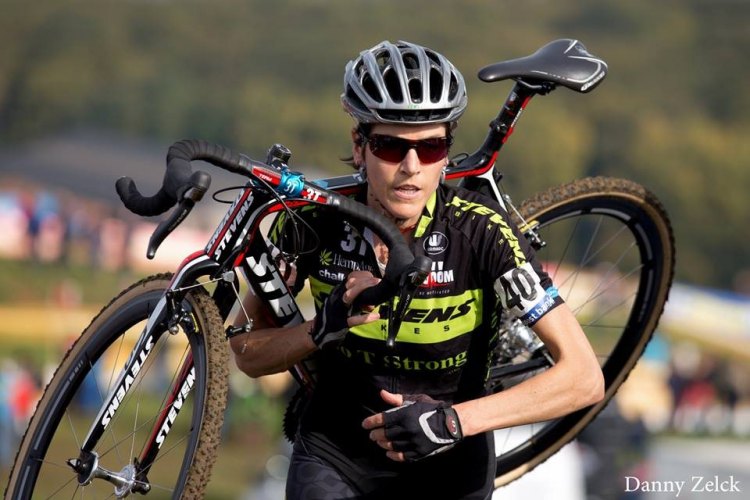 I am smack dab in the middle of yet another full Belgium-based cyclocross season. This means I’ve taken the dive down the zig-zagged lines riddling the Zonhoven sandpit, bounced around the neverending washboard at the QianSen Trophy Cyclocross Yanqing Station China race, slid through tricky berms of the Grote Prijs van Brabant , delicately navigated the off-cambers at Ronse, flew down the greasy death descent at Gavere, climbed the infamous cobbles of the Koppenberg, powered up the steep muddy Ruddervoorde mounds and bruised yet another finger against those immovable wooden course poles along the way. No worries about the finger, though, since bodies heal. Bike parts, however, remain permanently broken I’ve discovered. So far this season I’ve been lucky. I’ve only lost a derailleur hanger, two chains, a brake, a headset, 4 brake pads, a shoe and a pedal. As they say here in Belgium, I’ve been “goed bezig” (good busy).

Joining me again this season in my fight to be beaten by the best Euros week after week are most of the same sponsors from last year. They are STEVENS Bikes, T. Strong Transportation – a green transport company in Texas, 3T Cycling, Challenge Tires, Hempage Clothing, BOOOM Energy products, Tifosi Optics, Rivo Sports (NL distributor of Tifosi Optics), Tam Bikes, Specialized (helmet, shoes, gloves), and SHEEX performance sleep system. Again The Vegan Society’s logo is proudly displayed on my collar and butt and the BikePure logo on my arm. New for this season’s “Peanut” team are Belgium-based NODRUGS cycling clothing and Dieci-9 bike care products as well as Fitness by Farzan expert personal training located in California and Belgium. The new kit design is amazingly “vegan & earth friendly” with fruit over half the kit as well as a trail of animals making their way around my arm and leg. Any day now my clothes will be ready for racing! In addition, NODRUGS is also selling a friends/family/supporters version of my kit on their website in the “Peanut” shop, along with a few other items. I’ve never had my own Peanut shop so I’m naturally super excited – especially considering the clothing will be even more veggie-earth focused than my racing kit. The items will go on sale at nodrugs.be shortly.

As for my racing, it took a few events to get back into the swing of things but finally in the last ones it all started to click. I felt alive, strong and ready for battle where I’d (mentally) pound my fist against the handlebar at the start lines of the races. At one event, I found myself repeatedly smacking my front wheel against the ground in anticipation of the green light. It earned a smile from a fellow competitor standing alongside me. Good thing the “vroom” sound that went along with it was only in my head. 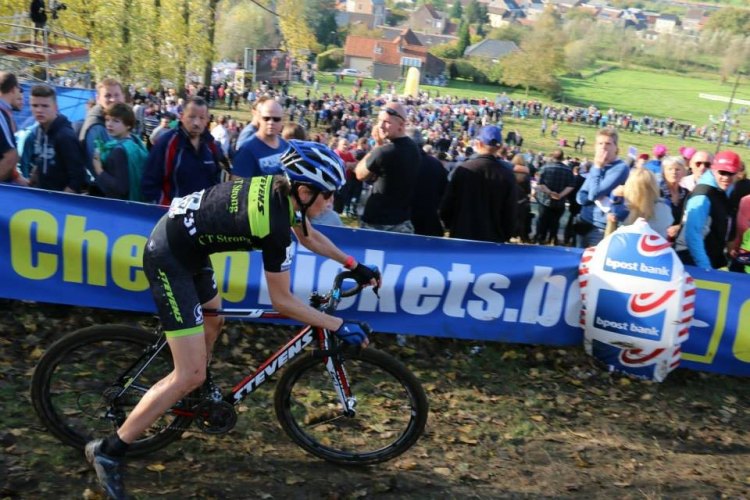 My solid feeling was timed nicely to come in the middle of a heavy period of racing with Superprestige Zonhoven, Jaarmaarktcross Niel, Superprestige Ruddervoorde, and Superprestige Gavere where I finished 16th, 15th, 14th, and 14th respectively. Not the best results I’ve ever had, but considering I’ve been in intensive hip therapy the last months I was very pleased.

It was in Zonhoven where I first noticed that my spark was returning. Usually upon entering the super steep sandpit, I begin to double guess why I’ve chosen to race cross in Belgium where we’re constantly thrown technical sections so crazy that people literally break ankles just trying to walk down them. Riding down earns them broken collarbones. I’ve once even seen a pro mountain bike racer get off her bike, sit on her butt, and slide down a descent with her bike in tow. I’ve also witnessed cyclists pre-ride World Cups the day before but after discovering what they are expected to do, they’ve gone home.

But this time around in Zonhoven, I simply closed my eyes and flew down without a worry in mind. I flailed a bit on sand climbing and turning bits here and there that cost me valuable seconds, but for the most part I was able to go deep painlessly for the whole race which felt amazing.

Next up was Superprestige Ruddervoorde a week later. The course was super fast with a few technical mounds and a couple of oversized washboards thrown in for good measure. While I may not have come anywhere near winning the race, I was one of only two gals to ride up the most difficult mound. I took that confidence boost with me into the next race of Jaarmaarktcross Niel two days later. What made this race particularly challenging were the running bits that appeared to have added up to half the track. The two never-ending stretches were a sand section with advertisement poles buried right in the middle, forcing even the Sven Nys types to run, and the other was a greasy muddy off-camber that was nearly impossible to stay upright while on foot. 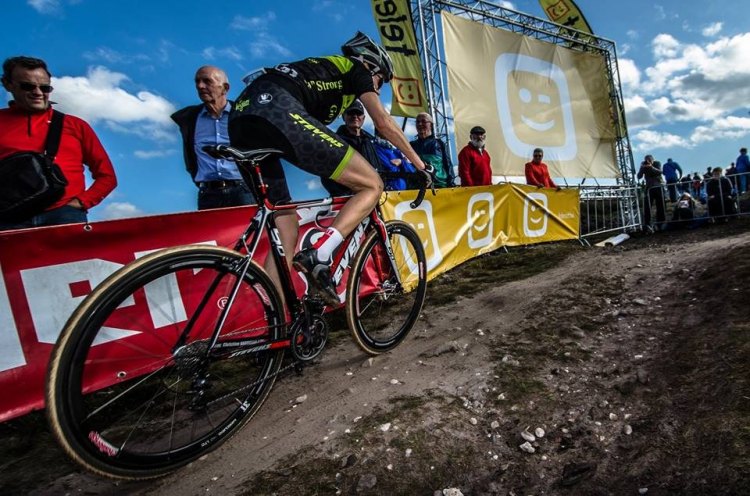 Vardaros getting out of the saddle at Zonhoven. © Tom Prenen

A few minutes into the race, I stupidly missed my pedal after a barrier and got bogged down in soppy mud off the good line. Even so, I didn’t fret. I just rode my own pace and picked off the riders one by one. By the end, I found myself trailing behind the 11th-14th placed riders but just couldn’t bridge, mainly because I continued to get in my own way. In the last two laps, for instance, I made the decision to try and ride a steep muddy bump. Instead of just opting for the safe way by foot like the other gals, I fudged my attempted ride and had to do the 2-footed shimmy to the top which cost me a few seconds each time. Miraculously nobody got a photo of my amateur maneuver…or they kindly put the camera down and looked away as I passed.

The last of the string of recent races was Superprestige Gavere where I expected to keep my improving trend in a forward motion. But it was not to be. Two minutes into the race, when we all had to dismount our bikes and trek around in ankle-deep mud, my shoe buckle broke, leaving the shoe dangling on my foot for the rest of the race.

I attempted to tighten the shoe for the first few laps in all spots where we didn’t have to pedal – which meant while the other riders were descending the tricky bits with both hands on the bars, I was with one hand on the bar and the other on my shoe in hopes of apparently weaving a new buckle. Collisions with spectators were narrowly avoided a few times during my one-handed maneuvering. Surprisingly I was still able to pass some riders with one working shoe thanks to the technical bits where shoe count didn’t matter. In the end, I lost the sprint for 13th place and finished again 14th. My next race should have been Koksijde World Cup, but due to an inclusion of a “no substitutes” policy in the new UCI Top 50 rule, I am left off the roster. I also missed Valkenburg World Cup a month ago because of this mistake. The rule was created so that all riders in the UCI top 50 ranking are allowed to participate in the World Cups, meaning that National Team managers cannot leave riders out because they are “too old” or “not French enough”, etc. The rule also stated that none of these top 50 riders can be replaced if they do not plan to attend a certain World Cup. While this anti-replacement rule was intended to manage the Belgian men’s count as they now have 15 riders in the top 50, it backfired when it came to the USA and The Netherlands women.

There are currently 10 USA and 7 NL women in the top 50. With the “no substitutions” rule, this means that USA, for instance, cannot fill the spots of those who choose not to ride – even if means only 3 of the 10 go to the World Cup, which is what happened in Valkenburg. In addition, the Netherlands were short 2 women in their own home World Cup. This rule unfortunately takes away a country’s ability to fill their eight per World Cup roster in the advent of top 50 riders unable to race.

Thankfully, I just got word back a couple of days ago from Mike Plant confirming that this is indeed a mistake and he will be sure to get it fixed as soon as possible, but not before Koksijde unfortunately. It is a pity I only found out a few days ago that he is head of the UCI Cyclocross Commission. Otherwise if I contacted him sooner, he may have been able to make miracles happen. I’ll never know.

If Plant can get it in order in the next UCI Cyclocross Commission meeting the day after Koksijde (which is looking positive considering other commission members Helen Wyman, Peter Van den Abeele and Geoff Proctor are also kindly in agreement), then I, and the others who fell outside the top 50 from USA and NL, will be able to race World Cups again starting 29 November at the Milton Keynes World Cup. Now to figure out a way to get to the UK at such short notice. “Living the dream” here in Belgium is not always what it’s cracked up to be at times like this. Even so, I wouldn’t trade the experience of racing every week in front of thousands of screaming spectators for the world. It is a thrill and a motivation like no other!