“I could hardly sleep!” Stephen Hyde (Cannondale p/b CyclocrossWorld) exclaimed to Cyclocross Magazine about his restless night before the 2017 Cincinnati Cyclocross kicked off.

The ingredients were coming together for what Hyde hoped would be an early Christmas.

“It’s finally cyclocross weather.” he excitedly explained. “We got a little percipitation. Got a little damp.”

Add in the facts that the Devou course is what Hyde believes is the “best course in the country” and he had an opportunity to climb closer to a $10,000 prize on the heavy, hilly course, and one can start to see why the 2017 Cyclocross National Champion couldn’t hide his excitement.

Hyde came into the 2017 Cincinnati Cyclocross weekend sitting second in the US Cup-CX standings, but lying in bed the nigth before, he knew that with “heavy” conditions awaiting and a lingering illness finally behind him, he had a major opportunity to climb into the lead in the race for the $10,000 prize.

To do so, he’d have to put an end to the Tobin Ortenblad (Santa Cruz / Donkey Label Racing) and Kerry Werner (Kona) win streaks. Ortenblad entered fresh off back-to-back wins at Gloucester, while Werner did the same at DCCX.

Hyde? He recovered from his sickness and put in a massive training block—wins in his book—all while keeping his eye on the prize.

The Winning Has to Stop

With several win streaks and a big payday at stake in Cincinnati, more than a few racers were bound to go home disappointed.

When the whistle blew, Werner made sure that it wouldn’t be him, at least on the first lap. The Kona rider rocketed down the starting straight to seize the lead in the first few muddy turns. On his wheel was Hyde and Ortenblad. The top three in the US Cup-CX standings were ready to do battle and not let the others get in their way.

If Kaitie Keough’s performance in the Elite Women’s race was any indication, the course and conditions at Devou Park would not lend themselves to pack riding in the men’s race, and experience would pay a premium.

Half a lap into the hour-long race, Hyde moved onto the front, but Werner and Ortenblad were right on his wheel. A gang of young stars, featuring Cooper Willsey (Cannondale p/b CyclocrossWorld), Gage Hecht (Alpha Bicycle-Groove Subaru), 2017 U23 National Champion Lance Haidet (Donnelly) and Spencer Petrov (Aspire) were hot on their heels. Gage Hecht had a strong start and finished fourth overall and second among the U23. 2017 Cincinnati Cyclocross, Day 1. © Cyclocross Magazine

Nowhere to be seen was Aspire boss Jeremy Powers, or Jonathan Page (Human Kind), who was racing Cincinnati for one last time.

Hyde took a lap to survey the course and his competition and then set off to end the season’s parity in just one lap.

With each off-camber turn and run, Hyde stretched out his gap, and on lap three, the crowds at the “Pan Am Plunge” collectively gasped after seeing the National Champion’s jersey drop down the technical descent, with nobody in sight. Thirty seconds later, Petrov emerged, then Hecht. Ortenblad and Werner were nowhere to be seen. After a slow start and getting stuck in traffic, a resurgent Powers moved into contention. “The first lap was really bad,” Powers admitted. “I got into some traffic. Right at the start, I couldn’t find my pedal right, and I was ninth or tenth.”

Experience on a course that welcomes mistakes leaves plenty of time to come back, and Powers remained calm. “There’s no reason to freak out about anything,” Powers said. “You know it’s gonna come back.” Powers did come back to nearly everyone but Hyde, while behind him, Page was taking in his Cincy swan song, and maximizing his experience even when he knew “those young guys are fitter.” He hoped the mud would “slow down the young guys.” Ortenblad spend much of the race looking down, searching for answers as to his bad day. 2017 Cincinnati Cyclocross, Elite Men, Day 1. © Cyclocross Magazine

Page had just finished doing yard work for several houses before getting on a plane to Cincinnati and admitted that this could be his final cyclocross trip, ever. He harnessed his nearly three decades of cyclocross experience to ride many several features that the rest had to run, and started to move into the top ten, passing Ortenblad, Werner and Curtis White (Cannondale p/b CyclocrossWorld).

A Final Push, a Final Farewell While Hyde was in complete control and stretched his gap to over a minute, leaving plenty of time to celebrate, Powers pushed his way past Hecht and would have his understudy Petrov in his sights. Try as he might, Powers couldn’t quite close the gap to offer his services to the newest Aspire member.

The real competition was behind the leading three, with valuable UCI C1, US Cup-CX and ProCX points on the line. White did his best Jonathan Page impression, stepping through on his way up the run-up, and holding off the former Worlds silver medalist.

Page unfortunately couldn’t hold off the cumulative efforts of coming back on the heavy course and his physical labor jobs, and said on the last lap, he “starting seeing stars.”

First Werner would slip by, and then at the end, fellow Utah resident, Jamey Driscoll (Donnelly), but Page was more reflective than upset at losing two spots at the end to fall to eighth. Jonathan Page rode features others had to ran, but the effort and toll of his other jobs caught up to him on the last lap. 2017 Cincinnati Cyclocross, Elite Men, Day 1. © Cyclocross Magazine

“During the race I try to concentrate, but [retirement] creeps into my mind,” Page said after the race. “This could be my last trip. This is now a part-time job for me now. Maybe Nationals will be my final race of my career.”

“I am happy to still be out here, and people cheering,” Page admitted. “I love this race, it’s one of the best venues in the country.” 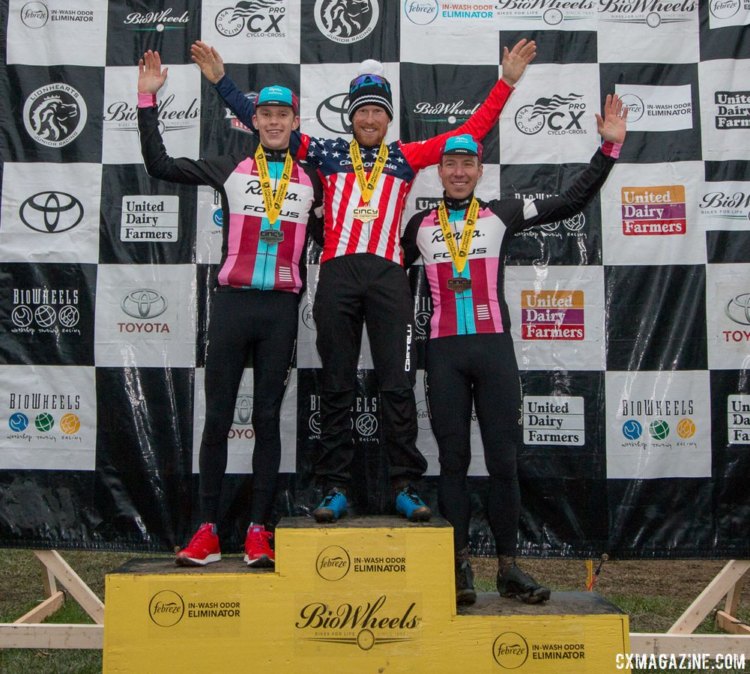 Hyde couldn’t help but agree, and is one step closer to the the US Cup-CX title.