While the Namur Elite Men’s and Elite Women’s World Cup races from the 2016 Namur UCI Cyclocross World Cup were thrillers, the U23 Men’s race was no slouch either, especially the race for second.

Watch Joris Nieuwenhuis literally ride away from the field the first time up the climb, leaving others to chase on foot and attempt to stay upright in the battle for second, with a few epic crashes. 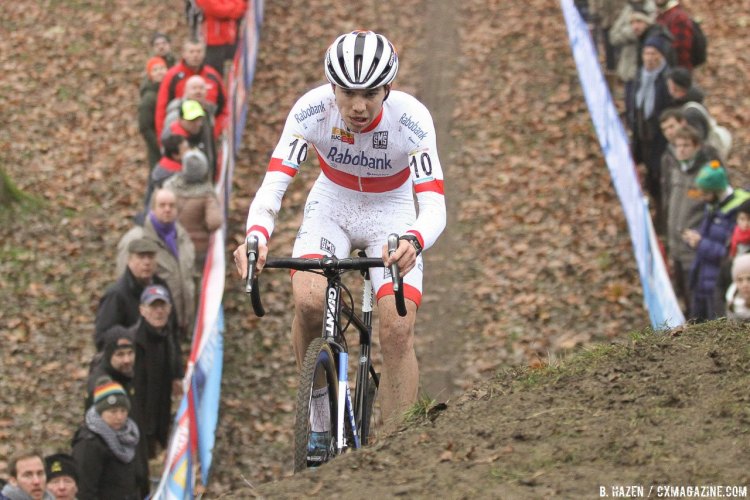 Joris Nieuwenhuis was one of the few to ride the climbs early on in the race, and they were invaluable in gaining an early lead. 2016 Namur Cyclocross World Cup, U23 Men. © B. Hazen / Cyclocross Magazine U23 World Champ Eli Iserbyt leads the chase and the battle or silver. 2016 Namur Cyclocross World Cup, U23 Men. © B. Hazen / Cyclocross Magazine

Five Americans took to the start, and while they didn’t get much air time in the highlight video above, gpscyclingtour.be posted some amateur video footage from one of Namur’s climbs, in which the Americans feature prominently.

See Pan American Champion Curtis White, ahead of World Champion Eli Iserbyt, attack the tough Namur climbs while in the main chase group of leader Joris Nieuwenhuis, with the rest of Americans close behind. White would finish in 17th. Proudly showing off Team USA colors were Gage Hecht 29th, Cooper Willsey in 32nd, Eric Brunner in 35th, Maxx Chance in 46th. See them all tackle Namur in the video below, with a photo gallery below the results. Stay tuned for full coverage of the Junior Men’s race from Namur.