Warming conditions greeted racers as they headed off the the start, with a group of five riders soon pulling away from the main bunch, headed by Timmerman. While initially appearing happy to sit with the others, Timmerman’s strength was too much and within a lap he stretched his gap to 15 seconds.

Robinson attacked and attempted to reach the race leader but only succeeded in putting time between himself and the remaining three riders in the initial bunch. Robinson has raced Nationals since 1990, and was pleased with his second place, using every tooth of his 42x36 gearing to ride the run-up.

The race for the remaining podium spots heated up in the last laps with Huseby, Stefko and Eneas Freyre (TTEndurance) catching an apparently fading Robinson as Timmerman sat comfortably 30 seconds ahead. This group fought amongst themselves before Robinson again attacked and pulled away managing to stay ahead just long enough to take the second step from Stefko. Huseby fell behind after tripping on a barrier but managed to hang on for fourth, just shy of the podium.

In our post-race interview Timmerman said he felt the condition of the course suited his skills from riding in his native Connecticut.

Molly Cameron was able to take the start after a change in ruling by USA Cycling to disregard her driver’s license gender. She would ride into the top five before finishing seventh.

Scroll through the slider at the bottom of the page to see a few images from the Masters Men's 40-44 championship race in Asheville. 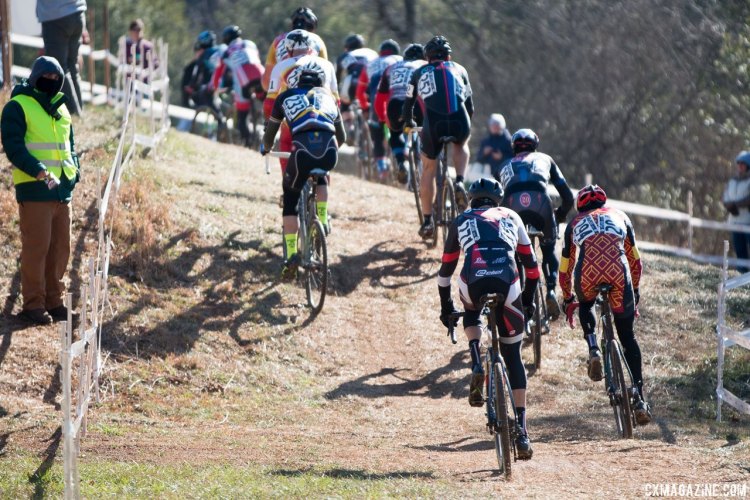