Video: Another Look at the 2016 Cyclocross National Championship Course

While we posted a preview video from Larry Miller yesterday, here’s another look at the 2016 National Championship course from “btsafrit.” The video was posted to YouTube on January 4 without comment. In that time, many folks that have ridden or raced the course in yesterday’s non-championship races have noted its difficulty and various technical features, as well as the fact that there are open places to make passes—or be passed.

Yesterday was sunny and bright, if quite cold, rain predicted for later in the week would see the course change dramatically given its up and down nature.

Championship racing starts up later this morning and we’ll be bringing you more opinions on the track as well as results, interviews and more.

Stay tuned to all of our 2016 USA Cycling Cyclocross National Championship coverage from the Biltmore Estate in Asheville, North Carolina. 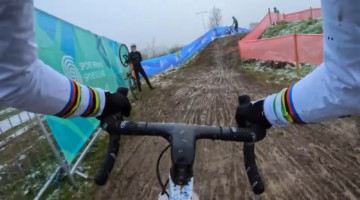