NAMUR, BELGIUM – Kevin Pauwels showed he’s not to be written off, with a commanding ride today at World Cup Namur. The Sunweb-Revor rider, who has been plagued with crashes and mechanicals this season, established a first-lap lead with Francis Mourey; by the third lap, Pauwels was all by himself with a gap that only increased for the remainder of the race. The constant, and severe, elevation changes suited the small Belgian, and he rode a technically perfect race to further capitalize in the tacky mud. 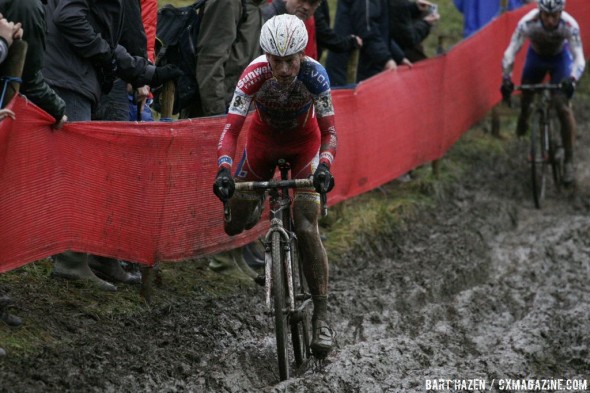 Mourey’s efforts to follow Pauwels ultimately proved too much, and it was Niels Albert (BKCP-Powerplus) who had the legs to give chase in second. The World Champion, however, didn’t have the engine to bridge the gap to Pauwels, and the entirety of the race was spent with the two leaders racing their own races, with Sven Nys, Klaas Vantornout (Sunweb-Revor), Bart Aernouts (AA-Drink) and Mourey making up the main chase behind. Third place looked like it would come down to a battle between Nys and Vantornout, who had traded positions throughout the race, but as Vantornout’s engine faded, Nys’ revved, and the Belgian champion set off in pursuit of Albert, with Mourey finding a second wind and holding on for fourth. As the racers came around for the final lap, Albert was visibly struggling while Nys only continued to look stronger, and soon Albert’s insurmountable gap did not look so secure. By the final turns of the race, Nys had caught Albert – Albert moved into the pits, however, suggesting that a puncture was partly to blame. As Nys shot by him, the world champion slammed his bike in frustration as he grabbed a clean rig, and crossed the line in third, clearly frustrated.

American Jeremy Powers had an impressive first lap, holding second position behind Mourey for a majority of the course, but the effort cost him as he then quickly faded off the lead pace. He finished 28th. Jonathan Page took top US honors, with 15th, a finish that qualifies him for the Worlds team. Tim Johnson finished 38th, with McDonald and Justin Lindine at 47th and 48th, and Jeromy Durrin at 54th.

The course at Namur today did not disappoint, with deep, sticky mud in places and slick, watery sections in others. At the gun, Lars van der Haar launched his characteristic bid for the holeshot, with American Jeremy Powers right on his heels as the racers made the turn into the steep citadel climb. By the top, it was Frenchman Francis Mourey in the lead, with Powers among a long list of big names: Pauwels, Vantornout, Albert, Nys, Aernouts, Simunek.

Coming into the tricky 180, which changes from pavement to mud while simultaneously gaining elevation, Powers ran the inside while van der Haar struggled to ride the outside, and the American champion and Frenchman found themselves alone off the front.

As Mourey charged across the course, the effort to stay with him looked to be hurting Powers, and soon it was Kevin Pauwels who slipped around to ride with the Frenchman. By the end of the second lap, Pauwels had dropped Mourey and set about building the lead that brought him alone to the line. Albert attacked out of the chase group, containing Nys, Vantornout, Aernouts, and van der Haar, and quickly caught and passed Mourey, whose efforts to stay with Pauwels seemed to have burnt a few too many matches. The Frenchmen soon slipped into the chase group, however, and spent a few laps recovering.

Much of the rest of the race took on a familiar form, as Pauwels and Albert powered around the course in solo fashion, Albert never making gains but looking to be securing his second place, and Nys and Vantornout trading lead duties as the group of four – van der Haar and Aernouts having fallen off – continued their pursuit behind. However, it’s not a Euro-cross script without Nys pulling something spectacular off in the second half of the race, and today was no exception. With only two laps to go, the Belgian champion seemed to wake up, and as Vantornout visibly cracked, Nys stormed across the course. Cameras showed Albert with pain and fatigue writ large on his face, while Nys only appeared calm and controlled, and the gap that seemed set in stone began to crumble.

As the cameras turned to Pauwels’ victory salute, Nys drew within striking distance of Albert, whose luck had run out – as Nys came onto the world champion’s wheel, Albert swung into the pits, banging his bike, apparently having suffered a puncture. Whether he would have had enough left in his tank to hold off Nys, we’ll never know, but by the time Albert grabbed a new bike, the fight was over. After spending the entire race alone in pursuit of Pauwels, Albert found the finish line 200 meters too far away, and had to settle for third. He retains the World Cup lead, with ten points over Sven Nys.

Next post Racing Namur for the First Time: a EuroCrossCamp Transmission from Justin Lindine