The World Cup at Koksijde is well-known as a draining race, forcing riders to slog around at 50-60 rpm in many of the sand dunes that are even ride-able on the course. The day began with a few change-ups, most notably from the Dutch riders Lars van der Haar, who was told by his doctor that he shouldn’t attempt to race while fighting the current cold, and Marianne Vos, who still has of yet to begin her season as she is currently riding in South Africa.

Sanne Cant continued her dominating last three weeks to take yet another win, although this one was on the World Cup stage. The Belgian rider had a flawlessly timed attack on the last lap to shed contending riders Sabrina Stultiens and Sophie de Boer, both from the Netherlands, and the three made the podium in that order over a minute before fourth place. For most of the late part of the race, the three riders stayed together, none of them holding much back as the course forced all the riders to leave everything out there.

While the three seemed content to let the race play out to the line, Cant either took a major gamble or made a tactically brilliant move. Whatever you want to call it, she attacked in the last area of rolling sand that was still ride-able, while the Dutch riders were fully saving the last bit of their strength for the pavement. The gap she created held, and Cant finished at the line alone while the other two fought each other for second. The ride was a breakthrough ride for Stultiens, who was ecstatic with her second place finish after outkicking de Boer at the sand dunes in Koksijde. While she struggled early as she contended against some of the more technical aspects of the course, Stultiens never quit, and elected to keep the leaders in sight, continually gaining ground in the grass straightaways. By the time most of the race played out, she was sitting with the lead group and fought well at the line for second.

This race is de Boer’s second time in a row taking third, and the result is good enough to put her first in the World Cup Standings overall, ahead of Katie Compton. Cant’s win vaulted her from seventh to second place, with only two points separating her and de Boer for the lead. Katie Compton, recovering from battling her own cold, was hoping to defend her top standings in the World Cup, was only able to take a top-ten finish and relinquished her World Cup lead and leader’s jersey to  the teammate of American Elle Anderson. Compton admittedly suffered an asthma attack, which also hampered her training ride the day prior. 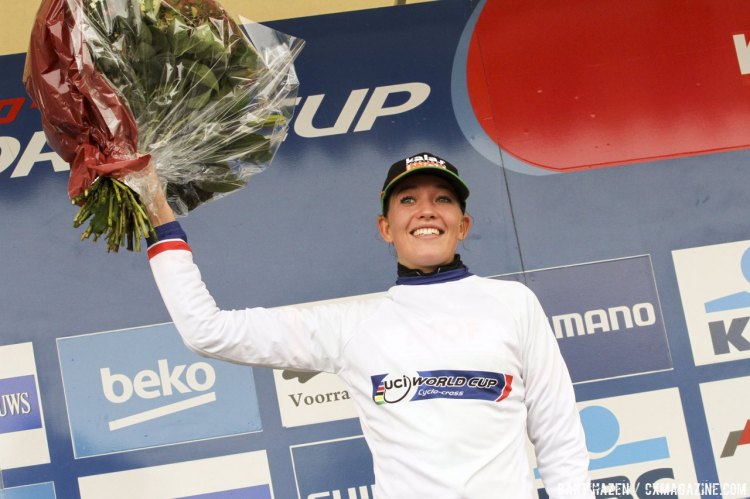 Fellow American Rachel Lloyd, well-known for her technical prowess, fought well on the day for a 12th place in her first World Cup since retiring after her 11th place at the Hoogerheide World Championships in 2009.

Crystal Anthony also contended well for a top twenty finish. Other Americans Elle Anderson and Meredith Miller did not finish.