Training Tuesday: The Pros and Cons of Offseason Weight Lifting for Cyclocrossers (and Cyclists)

Two weeks ago coach Chris Mayhew helped you strengthen your mental muscle, but now that you’ve started getting that pumped up, what about the rest of your body? The coach returns offering some advice on building functional strength and burning excess offseason energy in today’s Training Tuesday column.

Weight lifting. It’s a topic that people were fighting about on Usenet when I was introduced to it in the early 1990s. I am sure the colonies on the recently discovered planets will debate it too. I personally have gone 360 degrees on the issue although I wouldn’t say I ended up exactly where I started. This column isn’t really about convincing you to lift or not to lift. I’d like to walk you through the pros and cons of the debate and let you make your own decision on what would best benefit you. At the end of the day, I want you to be better than you were but there’s no single answer to that for all people. When I talk about weight lifting I mean off bike activities that involve moving an object against gravity. That could be your body weight, that could be hunks of iron, or anything in between. Typically this is done in the offseason. Doing this sort of work is a unique stimulus and that will almost always leave you sore afterwards, which in turn makes it hard to do quality days both on the bike and in the weight room. You can flip that, though, and make it a benefit. After ’cross season there’s a big void in terms of hours spent exercising and the resultant endorphin fix. Combine that with the short winter days and it’s a recipe for depression. Lifting weights give you another way to check that box of “having done work today” and gets you your fix as well. Take those 36F and raining days and find another way to improve yourself.

Some other criticisms of lifting weights are the increased muscle mass and that there really isn’t a lot of force involved in pushing the pedals. To the first one I’d say that you don’t have to lift so much you gain 20 pounds, or even 5. There are methods and types of lifting that you can do (primarily body or low weight) that will greatly increase tone and improve muscle mass without adding significant weight. Don’t worry or dream, you won’t look like this any time soon: 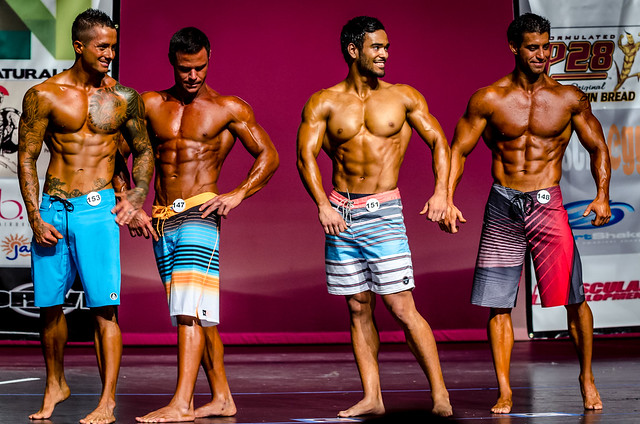 It takes months and months of focused lifting to gain that kind of mass, and I’d recommend undertaking a serious program for only a few months until the weather gets nice and you want to ride your bike during your available time. Not to say that you should quit cold turkey, and in fact I think you should be doing a little something most of the year. But a few push-ups isn’t keeping anyone off the podium, especially a cyclocrosser.

To the criticism that there isn’t much strength involved in pushing the pedals my response is, “Yes, but…” Sure, each time you force the cranks down it’s a pretty trivial amount of pressure, even at low cadences. But does your knee hurt after rides? That could easily be a weak gluteus medius or tensor fasciae latae. Cycling primarily emphasizes a concentric force (e.g. your muscles always tighten as they contract) and that’s all happening in one plane (e.g. no lateral movements). Add in the posture of sitting on a bike that is much like the horrible posture one adopts to sit at a desk or stare at a phone and suddenly you’re human roly poly. Let’s spend some time working the antagonist muscles (the ones on the back instead of the ones on the front). Let’s also spend some time doing eccentric contractions (muscle lengthens while contracting). I vividly remember Todd Schoeni, my bike fitter, asking me to do a one-legged squat (e.g. a pistol squat) many years ago at our initial consult. Not only could I not do it, I found myself wondering if humans were meant to do this! Let’s work on something else besides that thing you already do 9-12 months out of the year, even to see if it helps you out.

What specific form you take is up to you—this is a golden age of lifting. When I started in the mid 1990s with my cycling team, our coach (hello and thank you Edd Johannemann!) took us to the gym and showed us some basic moves. But that was really the only resource we had at the time. Now there is almost too much information on the web about proper form and how and what to do. Here are a few I’ve found very helpful:

Maybe you end up with a few simple moves in the gym. Maybe you take a class at a gym. I’ve personally found Crossfit great (with a few caveats). Whatever environment, protocol, or weight training system your find yourself in, there are a couple of key recommendations I would make. Find something you can easily do. If it involves driving across town or going to a skeevy gym then you’re not going to make it a habit. Get an expert set of eyes on you till you get good form.

All the YouTube videos or $9.95 home videos in the world aren’t going to be as good as an hour of coaching under someone who knows what they’re doing. Would you rather watch Jeremy Powers’ Cross Camp or would you rather attend one of his clinics in person?

Lastly, start slow. You have a big engine and a horrible transmission. You also have a really good work ethic and a great mental game. That’s a dangerous recipe in a gym with weights:

Start with minimal weight (just the bar, as a small specific example) and focus on good form and movement for a few weeks. I know you can do more, but I promise you’ll be very sore for two days afterwards. Once you adapt to that your can conservatively start adding weight to your routines. Letting your ego get involved, in any activity, is a sure way to get hurt, fast.

What’s the end goal here? Hopefully it gives you a productive way to channel some of your energy. Specifically with weights, I’d like to get you out of your comfort zone. Focus on being a whole human being who can actually do things humans are meant to do like run and jump and pick things up. I was really happy to find that, after some weight training, I not only can give my son a piggyback ride again these days, but I can do squats with him. Come July I’ll probably (again) be hard pressed to do that. You don’t have to go to a gym to lift something heavy. photo: let ideas compete on flickr

Maybe we address some weaknesses that a bike is just not going to hit that help you make a bit more power or more likely allow you to make that power with a lot more comfort. Let’s really build up some core strength that enables you to power your bike in the mud and sand. Let’s develop some solid shoulders to allow a solid carrying technique and make you more resistant to injury in low impact falls. Give it a month or two and see what you think. If you like it, awesome! If not, don’t do it any more! If you keep doing the same thing, you keep getting the same thing. It’s good to experiment and find what really does work for you.

I’ve been across the full spectrum. I lifted every winter (pre cyclocross) for years. Then one spring I couldn’t fit my shoulders into my skinsuit and I gave up on lifting. This was about the time power meters came around and making more watts became my focus. Now I’m kinda old and I know how to make the watts I’m capable of. But doing them injury free or dealing with the injuries I have is the bigger issue. Weights do hamper my riding a bit but in February I am fine with that. I honestly can’t see myself in a gym in July, but I will continue to do some bodyweight work as maintenance.

“A few push-ups isn’t keeping anyone off the podium, especially a cyclocrosser.” A few push-ups can do the body good. photo: Kourtlyn Lott on flickr

Consult with someone who knows more than you. Most gyms have knowledgeable trainers—ask for help or schedule a few sessions. Do some reading but most importantly do some work. Give it some time for the adaptations to come about and then evaluate how you feel about it.

Can’t get enough? Browse all of our Training and Technique Tuesday pieces here from coaches Mayhew and others. Mayhew expects to contribute Training Tuesday installments every two weeks in the offseason. Learn more about Mayhew at JBVCoaching here.

Next post Hungarian Pride: Zsolt Búr Talks Worlds and Next Generation of 'Crossers