With cyclocross season almost upon us, it is a good time to start thinking about the actual bike racing. Early season races can often be hot and fast (think Rochester in 2016) and thus they will likely play out differently than late-season mudders. Understanding the course and conditions can give you a mental edge and help you avoid wasteful attacks that are not like to be effective.

In today’s Training Tuesday, Coach Chris Mayhew talks about preparing for fast early-season races that some may dare to call “grass crits.” Learning to prepare for these types of courses can help you get good September results to carry you into the rest of the season.

I have previously written about preparing for hot races and pacing in cyclocross, and today I would like to specifically address the tactics of racing on the sort of courses you find in hot, dry weather. Temperatures are increasing and racing routinely starts in early September if not before. Both of those factors can foster a certain kind of course and race that require specific tactics that differ greatly from a cold, muddy slog that you might encounter in December.

Allow me my soapbox for a minute. “It’s a grass crit,” is a tired refrain. No, it’s not some Platonic ideal of a Belgian mudfest—which is its own trope—but it is still a bike race and it is still going to be very hard. As a cyclocross racer, you do not get to be a specialist as you might on the road. You have to show up and race whatever the course and conditions have presented on that particular day.

Show up with a good attitude and race what you are given. And if you feel like the race should be different, find a way to contribute to an event next year.

Dry, dusty courses primarily covered in grass tend to break down into two types of courses. The first tends to have a lot of corners and maybe shorter lap times than normal. Frequent corners and short straightaways tend to blunt any advantage from pedaling hard. This means you end up with small groups of racers battling for position into the last couple of corners to decide the finishing order. Handling skills are at a premium on this sort of course because there are a lot of corners and doing 500 watts for a minute to get a gap is not usually an option.

How do you handle such a course? Getting a good start can be more important. It gets you out of early traffic and is often low cost because the first bottle neck comes pretty early on. After that, the race features a lot of sprinting and coasting.

After that, be patient. Launching huge attacks will likely burn precious matches while you with the same group of riders. A better way to get an advantage over your competitors is to realize you are more or less with the group you are going to finish with. Keep an eye out for where you have an advantage and how the last two or three corners before the finish play out each lap. The first person into that last corner or two wins at the line, so figure out what it will take to get there first.

Feel free to give yourself some space on these courses too. There’s no sense in letting someone else take out your front wheel in a corner because you were following too closely. You can conserve a lot of energy leaving a small gap into the corner and then coasting through it to close the gap rather than having to brake and sprint hard. This is assuming, of course,  you can keep the riders behind you from trying to jump into the gap. 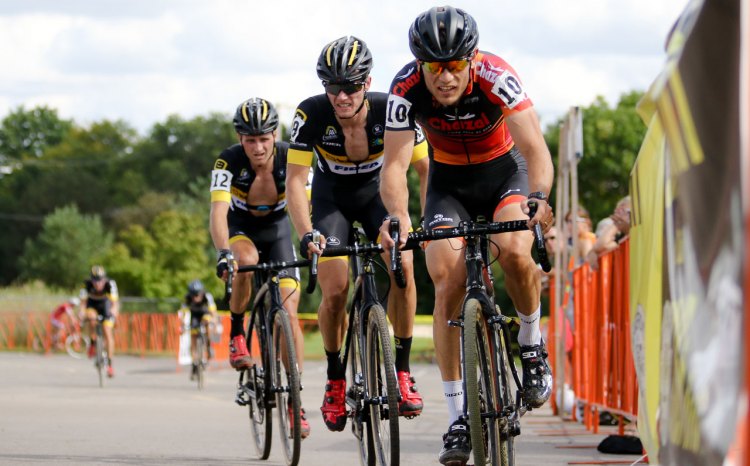 Steve Chainel learned the importance of playing the last corner right when he outdueled the Telenet-Fidea team on the first day of the 2016 Trek CXC Cup. © Jeff Corcoran

The second kind of course is a long open course with a lot of pedaling, often with little elevation change.  These are personally my favorite because PEDALING! Grass tends to offer a lot of pedaling resistance and the long open sections mean you can be on the gas for a long time too. On the flip side, there’s really no place to recover, so really big efforts can have a high cost.

These courses are much more like a time trial in nature. To deal with these courses, realize the start might not be so important, as you have a long time to pedal up to a group. High wattage attacks often work in these races but realize if they are not timed correctly they may backfire. These races really favor good pacing over the full duration of the race.

These courses also tend to favor roadies burning off the last of their form before pulling the plug in October or so. Know that you may lose a few spots to those riders in these early season races with specific fitness demands. Be happy people are participating in the sport and who knows, maybe they’ll stick around for a full season next year.

Watching how other races play out can tell you what kind of race is in store. At CrossVegas in 2016, Sophie de Boer, Katerina Nash and Katie Compton finished as a group, meaning positioning at the end of the race is key. 2016 CrossVegas World Cup. © Catherine Fegan-Kim / Cyclocross Magazine

A quick and easy way to figure out what sort of race is on hand for the day is to watch the finishes of the races before you. If you see little groups of one to three coming across the line with close finishes, it is the first type of course. If you see a lot of single riders finishing, usually accompanied by flopping off the bike immediately after the line, you have the second kind of course. Full on pedaling for 30-60 minutes is exhausting, especially in the heat. Riders in the grass 20 meters past the line is a sure sign of a long drag race day.

“Grass crit” or not, a bike race is a bike race. Learning how courses influence the type of racing can provide you with an advantage over your competition and give you a mental edge that could be the difference between getting the result you want and coming up short.

Cyclocross season is fast approaching, and it is the perfect time to get dialed in for the season. Check out all of Coach Mayhew’s Training Tuesday pieces for more training and racing advice.