After racing past editions of the SSCXWC in Portland, I was nervous about moving the race to Seattle in 2010. Seattle has been described as a city that is insecure, always smelling its own breath. To properly stage, or ride, the SSCXWC you must throw caution to the wind and let it all hang out. I was hopeful but not optimistic; optimism comes hard in this gray town.

Past editions of the SSCXWC were parties that flaunted the passions and eccentricity that is Singlespeed Cyclocross in your face with all the subtlety of a fart in a phone booth. Would Seattle drop the ball and let this event digress into just another cycling race? The question lingered when months ago I saw on the SSCXWC website the promise of a qualifying race the day before. Would the costumes and righteous irreverence be replaced by the same old team kits and serious racing? Would Seattle honor the SSCXWC? Could they do justice to the epic events of years past? I felt like an anxious little league parent.  Could my town pull this off with everybody watching?

The Qualifier
Fight for your right to PARTY!

Thursday evening before the race a cryptic map was posted on the race website of a qualifying course with indulgent political incorrectness. My spirits rose. Perhaps the treachery and bribery that had been integral in past editions of the SSCXWC would again be in play. This delighted me from a personal standpoint as I cannot rely solely on speed and ability.

After spending most of Friday morning mapping the route, I went for a little reconnaissance ride. The qualifying course was a bit contrived, but with objectives with names like the “Hobo Greenbelt” and directions that included the phrase “we don’t care how you get there,” the course was a slice of Seattle that rarely gets served on TV. The qualifying course included streets, gravel, dirt paths, parking lots, bike paths, singletrack, greenways, pedestrian bridges, stairs, grassy knolls and enough urban grit to choke a goat.

Riding the course gave me no real advantage, so when it came time to qualify, I had to rely on cunning. We rolled out in groups of 10 at four-minute intervals. Getting the holeshot meant you were the first in line at the railroad crossing waiting for the train to pass. City roads were followed by concrete stairs and a steep section of sidewalk before dropping into the Hobo Greenbelt. Rusting shopping carts just off the trail and dirty tents in the shadows reminded me there are many reasons to go fast.

A run up through soggy fall leaves led to a short stretch of pave before getting on the bike path. Soon we were at the first checkpoint where our assigned task was jumping rope. After executing our mandatory test, we received a token that would be evidence that we had performed as asked.

After more bike path and a short road section, we got off-road again for a steep descent. Following the rules meant riding off the road whenever possible. This slowed my progress compared to others, but I would not be deterred.

Another checkpoint resulted in a Thigh Master workout followed by a slog through wet grass and a long climb on a trail that paralleled the road. Looking ahead I spotted another racer ignoring the trail and riding on the road. “Why don’t we all just shave our legs and ride Cervelo’s” I mused out loud.  When we passed him, we didn’t offer any greeting or encouragement – we felt no kinship with this roadie. Around the corner we came upon a checkpoint that was hidden from the road. Missing a checkpoint meant missing the token, which resulted in not making the finals. I felt no pity.

Race Day
After a night of biblical rains, Sunday dawned wet and muddy. All day Sunday MFG put on a first class series of cyclocross races. There was mud o’ plenty, and the mood was set. Those with awnings had to hold on for dear life to keep the wind gusts from taking their tents to Idaho. The rain picked up and Seattle was doing its best Portland impression. It didn’t take much to imagine you were at PIR. A couple brief breaks between storms gave everyone a chance to catch their breath. Race time was fast approaching.

Looking around before the race, my concerns were renewed. I saw a number of riders warming up on singlespeeds mounted on trainers. Had this event lost its mojo? I was worried.

Finally the costumes came out. A six-foot nurse with a hairy chest, wrestlers galore (thanks Raleigh boys), Cross dressers, Bigfoot, Sponge Bob, Businessmen, women in swimsuits, men in tighty whities, guys in Speedos, Superheros, Chickens, Sharks, Fairies and everything you would expect. There were more riders wearing team kits than in years past, but they realized quickly enough they were out of place and made mental notes for next year. 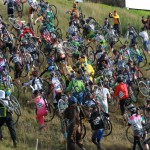 After staging we were directed to a grassy hill and after the countdown we stormed up. Looking up I saw water balloons raining down on us as we climbed. Young cyclocrossers had tubs filled with water balloons, and they continued to pelt us as we passed them. After a slippery downhill we passed below this same hill as the water bombs continued.

The muddy course was a challenge to all. A series of 10 barriers that each had cans of Pabst Blue Ribbon tempting the riders was a late course addition. As the laps ticked by, the barriers were first mowed down by the riders only to later be held aloft by fans for riders to go under limbo style. Riders were chewing on bacon and drinking frothy beverages to the roaring approval of the thick crowd.

The real racers separated themselves from those for whom participating was the whole point. The true brother- and sisterhood that is Singlespeed was apparent as the leaders lapped the costumed riders who quickly yielded the best line through the muck to the charging racers.

When all had crossed the finish line, bikes were rinsed off, and there was a podium ceremony. All celebrated some personal glory as well as the greater camaraderie of Cyclocross and suffering. Seattle had honored the SSCXWC.

After toweling off and changing clothes, I found myself driving north on Interstate 5 in a driving rain just as I had been after the previous two SSCXWC events. My bike cleaning was predictable and my three-step laundry (garden hose, washing machine, washing machine again) testified to the quality of the day. I don’t know what the deal is for next year. You can bet that when I do find out, I’ll start making plans.