The last time someone not named Jeremy Powers (Aspire Racing) or Stephen Hyde (Cannondale p/b CyclocrossWorld) won the U.S. Cyclocross National Championships, the year was 2013. Hyde came up through Powers’ JAM Fund program, so the two know each other well.

On Sunday, Powers and Hyde got the chance to take their old practice competitions to the brightest stage in U.S. cyclocross.

The race marked an impressive return to form for Powers after the former national champion suffered from health issues during the last two seasons. Powers led a line of race favorites for more than half of the race and then joined Hyde after an attack with three to go.

From then on, it was Powers and Hyde at the front. The former mentor and student now battling for the biggest prize.

The two went into the last lap wheel-to-wheel and battled for every corner like it was the most important of the race. With Powers leading heading toward the steep run-up, Hyde finally squeezed by Powers and took the lead. He accelerated away up the run-up and then with a gap, narrowly avoided a washout on the S-curve descent.

The winning gap and the Stars-and-Stripes jersey were Hyde’s for the second straight year. On a day that marked the retirement of four-time national champion Jonathan Page and a week where four-time champion Don Myrah raced twice, Powers narrowly missed drawing even with Laurence Malone with his fifth U.S. cyclocross national championship. Hyde’s teammate Curtis White (Cannondale p/b CyclocrossWorld) sprinted to the quick start at the first bend, but Ortenblad bunny-hopped the first three-stair combo Chris Blevins had mastered on his way to the U23 title. Powers strung out the pack from the start. 2018 Cyclocross National Championships. © A. Yee / Cyclocross Magazine

Powers led the way after the descent, and when he checked back at the conclusion of the first lap, he noticed that his lead group of six had swelled to seven, with the arrival of Cody Kaiser (Lange Twins-Specialized).

Kaiser wowed the crowd by hopping the stairs, but halfway through the lap he fell off Powers’s fast pace. Allen Krughoff (Krughoff Racing) tried to pull up to the lead group, but when all was said and done, it was the same group at the front.

During the third lap, the lead selection began to shuffle, but the one constant was Powers at the front.

“I felt good at the beginning and wanted to try and capitalize,” said Powers. “That’s how I like to race. I knew I had good legs coming into this, I knew the power meter was saying good things. Confidence and riding from the front is always hard on the other riders, and I knew that was going to be a factor. I was trying to use my experience to my advantage and race my race.” Early in the race there was a lead group of six. Elite Men, 2018 Cyclocross National Championships. © D. Mable/ Cyclocross Magazine

He took the high line beginning the off-camber descent of the Shimano hill, as Werner was consistently the only rider to go low. Even as they shuffled their order, the group of six held together. White suffered a front flat on the rocky descent, however, so the group was reduced to five with Powers remaining out front. White’s flat tire dropped him back three positions and ended his challenge to the front of the race.

Ortenblad shuffled the group in the 180-degree turns near the barriers when he bobbled the double yellow jumps on the exit. However, it reformed and the five riders stayed together. While Powers was driving the front, Hyde remained a constant in the middle of the group. The defending champion hit the mid-point of the race without a mistake and without sticking his ginger beard into the wind.

With four laps to go, Powers started to up the pace at the front. He had yet broken his rivals, but the toll was starting to wear on the other riders. Kisseberth, the current JAM Fund rider, was the next rider to pop from the group. Not because of the pace, but because he too suffered a flat tire on the descent off the hill.

With the group now at four, the race truly kicked off with three laps to go. The early leaders on the run-up. 2018 Cyclocross National Championships. © A. Yee / Cyclocross Magazine

Power and Hyde for the Title

Powers attacked over the finish line, and when Hyde asked Ortenblad to cover the move, he was greeted with a shake of the head. A hundred meters later, Hyde made the pass himself and countered right away with an attack of his own on Powers. He ran the three-step run-up early in the lap with a gap over Powers, but the American veteran was able to recover. Ortenblad, however, was struggling.

The race had featured a group for so long, and then the squeeze down to two was sudden and violent.

Flying toward the Shimano run-up, Hyde was on fire. Ortenblad and Werner had burnt up, and Powers was doing his best to keep Hyde’s pace with two laps to go. Hyde allowed himself a look back and appeared to take the pressure off, as Powers closed to his rear wheel. But the damage was evident; Hyde had shaved almost 20 seconds off of his fastest lap time. Two laps to go, Hyde and Powers were all that was left of the front six. 2018 Cyclocross National Championships. © A. Yee / Cyclocross Magazine

With the other riders dislodged, it was now Powers and Hyde alone at the front. During the penultimate lap, Hyde dabbed a foot on the steep descent, but recovered quickly and again grabbed Powers’ wheel.

The stage was set for a memorable last lap. A drag race broke out on the first dirt stretch of the final lap. Powers’ face showed the effort, but Hyde’s countenance remained unchanged. Twenty seconds later, Hyde attacked. Perhaps hoping to spring the gap on the sandy section, Hyde entered the section at full gas. But his line wasn’t as good as Powers’ and the Aspire Racing veteran was soon back in front of the defending champion.

The stretch between the barriers and the bridge at the base of the Shimano hill was a fight worthy of the National Championship stage. After Hyde missed his pedal remounting after the barrier, he recovered and did everything possible to pass Powers. Powers, knowing the importance of the lead position, continued to shut the door. At one of the last turns before the bridge to the base of the hill, Hyde finally snuck past Powers and took the lead position. He extended a small lead measured in bike lengths to one measured in seconds on the run-up. Hyde went careening down the off-camber descent, while Powers had run out of juice.

Powers echoed the same thoughts. We raced to the last corner, down the back side we raced,” said Powers. “I was probably one millimeter from hitting my bars on the metal gate – he just got a little bit of a gap running up that hill and that was sort of the race for me to that last corner and who was going to make it up that last hill first and who was going to nail that descent and Stephen took it.”

Hyde finished strong to take his second straight Stars-and-Stripes jersey. As he likes to say, no one wants to be a one hit wonder. Just as he did at the Pan-American Championships, Hyde dropped another hit. This one was one for the archive. 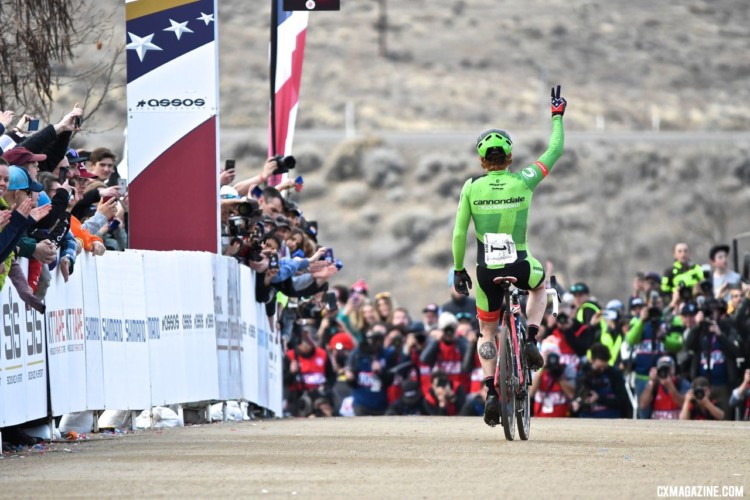 Hyde and Powers showed their mutual respect with an embrace at the finish line. It was a fitting end to a great battle. Werner slowly closed the gap to Ortenblad and took over third position with an attack shortly before the stairs during the last lap. Ortenblad had no response and Werner was gone to third for the second straight year. Ortenblad finished fourth.