SoCalCross Prestige Series round seven was considered an “off” weekend by many. The first third of the season had been conducted at an intense pace, and considering the long drive north to El Chorro Regional Park, it was clear that a lot of racers decided to take a break.

Too bad, because host team SLO Nexus designed a cool course along a creek valley with lots of hardpack, a two-way sandpit, lots of trees with leaf litter, a few spirals, a barrier, a short run-up and some off cambers. Fast lines were put down as the bumpy course wore in throughout the day.

Lots of series points were on the line for those who chose to make the trip. In Women’s A race, Nicole Brandt (La Grange/Michelob Ultra) and Elicia Hildebrand (Trek Cyclocross Collective) worked together at the front of the small field for the first two laps and built a healthy gap. By the third lap Brandt was off and not looking back, leaving Hildebrand alone in second.

Amanda Nauman (SDG/Felt/IRT), the winner of the first two rounds of the season, played catch-up the entire race after a botched start as well as a fall, and finished third. Holly Breck (SC Velo/Incycle) and Amanda Schaper (Ritte CX) came fourth and fifth, respectively.

It was the first series victory for Brandt, which also put her in the Voler leader’s jersey. “I rode hard but conservative, not wanting to make any silly errors,” Brandt reported. “Elicia and I battled it out for two and a half laps and when we came to the steepest section of the course I passed her and pushed hard until the top, took some risks on the following twisty, technical turns, and I was gone.

“I pushed myself hard for another lap, wanting to create distance between myself and the rest of the field, and after doing so, I was able to ride the final two laps more cautiously and at my own pace. Riding past the bike pit for the final time, I high-fived [my husband] Matias – it was an amazing feeling to win my first CX race!” Nicole Brandt finally enjoyed the view from the top step of the Women’s A podium. © Kenneth Hill

Jason Siegle (SDG/Felt/IRT) led the Men’s A race out into the first set of twists up and along the creek side. Teammate Dave Sheek moved into second and acted as gatekeeper during the next couple of laps, slowing the advances of hometown hero Blake Rowan (SLO Nexus) and John Behrens (Velo Hanger). About halfway through the race, with Siegle’s gap now solid, Sheek took off solo for second place. Rowan held on for third and Behrens fourth, while Jay Kwan (The TEAM SoCalCross) rounded out the podium in fifth after winning the Men’s B singlespeed race just one race earlier. Bailey Eckles (The TEAM SoCalCross) was the U23 winner, which he would repeat the next day.

“I got the holeshot and lead the whole race, getting a gap pretty early and was able to build on it without having to bury myself to do it the rest of the race,” said Siegle afterward.

Siegle added that he needed Sunday’s win as well to get as many series points as possible before the war against the Gritters brothers picks up again next week in Escondido. The Men’s A podium. © Kenneth Hill

Day two of the SLO Cross Weekend started an hour later – according to body clocks, anyway – due to the time change. It was on the same course but with the direction reversed, and with the lines in place from Saturday’s racing, very fast lap times were had by all.

Nauman made no starting line mistakes this time and took a decisive holeshot in Women’s A race. After one lap it was Nauman leading Brandt, with a gap forming to Hildebrand and Christina Probert-Turner (The TEAM SoCalCross). Through the sand on the second lap, Nauman fell hard and lost major ground to Brandt, who was now soloing in the lead once again with a formidable gap. Probert-Turner, Hildebrand and Nauman took up the chase. Late in the race, Nauman finally got free and set her sights on the distant Brandt.

A determined effort by Nauman paid off, and starting the bell lap the gap was down to just one second. Nauman outpowered Brandt on a rough uphill and that was all she wrote. At the line it was Nauman in front by two seconds. Probert-Turner, Hildebrand and Schaper completed the podium.

Nauman, speaking about her come-from-behind win said, “I had the lead for the whole first lap and then on the second lap I hooked my bar on one of the poles that was stuck in the outside of the sand pit. The better line was on the edge of the sand but I got too close there and just slammed into the sand. I got back up onto fourth wheel, passed Turner on the next lap, passed Elicia on the next lap, and then it took me until the last lap to pass Nicole.

“I made my way past her on the long bumpy uphill section. The backwards course from the previous day was much better for me because there were more straightaway power sections where I could put in some work. I think she just had some tired legs and I had a better second half. I’m definitely happier with day two but it was a tough one to make it back up there!” 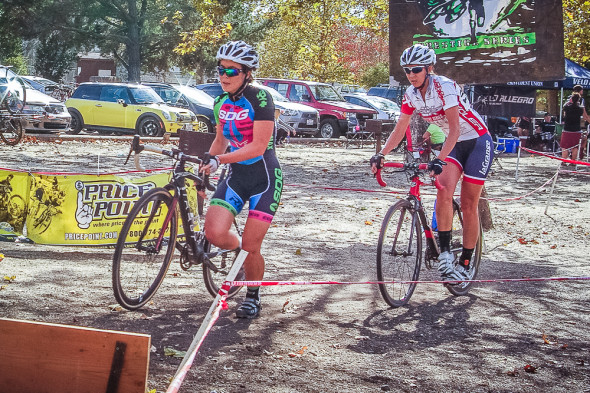 The Men’s A race went single file quickly, with Siegle again getting the lead and not looking back. Sheek again played perfect team tactics and kept the rest the field from closing the gap to Siegle. Behrens flatted while in third on lap three, forcing him to run more than half the course to get back to the pit. Rowan moved into third and chased Sheek the rest of the way, unsuccessfully. By the end of the hour-long, 12-lap race, Behrens had recovered to secure fourth place, followed across the line by Jordan Haggard (Mudfoot).

Siegle was succinct: “Day two was more of the same story. I got the holeshot again and lead the whole way. I pushed the effort a bit more and pushed it most of the race. That’s basically how it went.”  Siegle did indeed make up a lot of ground in the point standings. It will be very interesting to see how this all calculates at the end of next month, as a rider’s best ten results are counted for the title. Dave Sheek made it a one, two punch for Team SDG/Felt/IRT at SLO Cross. © Kenneth Hill

The next round of the SoCalCross Prestige Series holds special meaning for many in the region, as it memorializes friend, husband, father and longtime cycling advocate Udo Heinz, who was tragically killed in a riding accident this summer. Udo Cross presented by SPY Optic takes place Sunday, November 10 at Lake Hodges in Escondido, CA. More information is available at SoCalCross.org.

Previous post To Heckle, or Too Mean? - An Op-Ed on Heckling in Cyclocross by Daniel Curtin