Cyclocross season isn’t over, at least in Northern California.

The racing takes advantage of Mother Nature’s recent tears of cyclocross joy and continues for three more Sundays in February in Fairfield, California, smack dab between Sacramento and San Francisco, within an hour’s drive of 10 million people. 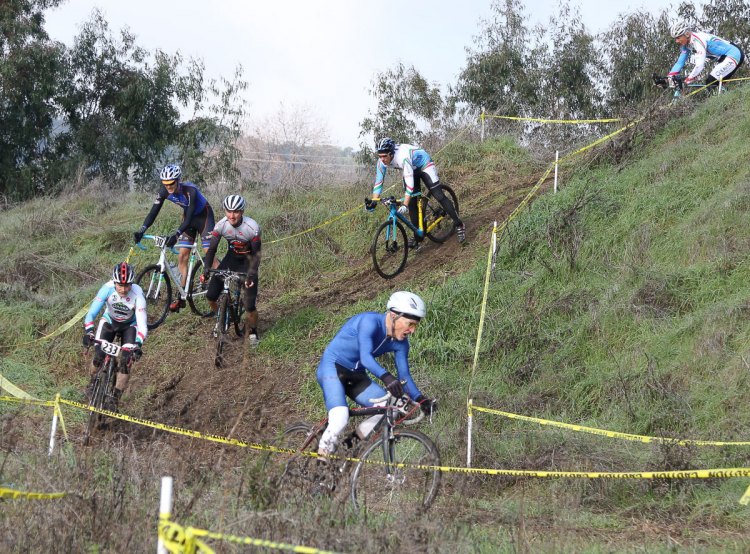 On the final Sunday of this month, the Rockville Cyclocross series culminates with a BBQ and relay race, ending racers’ seasons with a fun-oriented, social day on the bike.

Promoter John Silva isn’t your typical modern day race promoter. By some standards, it’s as if the last two decades have passed him by. His race series doesn’t currently have a website, a Twitter account or even an official Facebook page. In his five years of “promoting” his cyclocross series, Silva hasn’t announced his race series on the local cyclocross email list, even though he knows of its existence. There’s no pre-registration and results aren’t even posted online.

It's a sign that #cyclocross season continues. The gloriously muddy, laid back, grassroots @rockville_bike cyclocross series in #Norcal has three more weekends, including a relay and BBQ the last Sunday in February.

A few years back, we wrote about this throwback series, and that’s been the bulk of the race’s online presence. Mention Rockville to a Northern California cyclocrosser and they’re more likely to think of the Italian venue, the future site of SSCXWC. Curious and need more info? You’re encouraged to use a phone and place a call to get more information. It’s old-school race promotion, with an emphasis on old-school, not promotion. Promoter Silva and his series are a true throwback, not just a Thursday hashtag.

It’s not that Silva doesn’t want more people to discover the sport and his series, but between running a bike shop, serving as an elected (recently re-elected) School Board member in his town, and what seems like a desire to keep things simple, his series seems to be trapped in time.

Rockville Cyclocross racing may seem stuck in time, but that’s exactly why some of us still drive over an hour to get back to our roots as cyclocross racers, without endangering any heritage trees.

In Rockville, you won’t find team tents, long registration lines or race officials. Pull up for a Sunday morning race and you’ll be amazed how quiet it is—missing are the buzz of racers warming up on wind trainers, high-energy music and an excited announcer. It’s just you, your bike, a challenging course and a few dozen committed cyclocross racers ready to challenge themselves, get dirty, and have a laugh or a drink afterwards. Linda Elgart is a mainstay at the series, and shows off her form on the second set of barriers. Rockville Bike Cyclocross Series, Solano Community College. © John Silva

Isn’t that still the main point of racing for nearly all of us? Most of you said the pure fun of just participating is what got you hooked on the sport, not UCI points, pro athletes, series points, crossresults.com credit or big prizes. You won’t find any of those at Solano Community College, yet their absence doesn’t lower the value of the experience for the Rockville racers, and with entry fees at just $20 (compared to the region’s standard fee of $40), one could argue the value is actually higher.

“The goal remains to provide inexpensive and fun local cyclocross racing,” says Silva. He’s accomplished that for five straight seasons, even if the time of year or his lack of self promotion hasn’t brought the masses.

It has routinely attracted National Champions in John and Linda Elgart, who despite being perpetual contenders at Nationals, skipped the 2017 Championships in Hartford in favor of getting their racing fix in Rockville.

“One word…fun!” said two-time Cyclocross National Champion Linda Elgart, when asked what motivates her to keep racing through February in Rockville. The decorated racer echoed the mud-tub time machine element to Silva’s series. “It’s like ’cross racing was when we first started. No pressure, so low key and friendly. We enjoy racing and we enjoy ’cross, so why not just keep doing it?”

Elgart reveals the ironic, dirty secret that nobody really wants to share with Silva. His lack of promotion and low-key event is what actually attracted some of us to his series, and over the years, keeps us coming back for more.

A Happy Ending or Low-Key Beginning to a Season

Sure, unless you raced 2017 Worlds in Luxembourg or are getting ready for Cyclocross Tokyo, the cyclocross season probably ended over a month ago for most of you. Maybe you took coach Chris Mayhew’s advice and chilled out for a month and relearned the names of your loved ones, and now feel the urge to get back to the bike and get some fitness and bike skills back, and perhaps shed a few holiday treat-fueled pounds. Where else can you rip around in the mud, tear up some grass and not feel guilty and endanger trail access? Rockville Bike Cyclocross Series, Solano Community College. © John Silva

Not psyched to ride on the trainer to do threshold work or get splashed by the cars on gritty, slick roads? At Rockville, you can play in the mud, tear up some trails and not endanger land access for other two-wheeled friends, all while riding at your own pace. There’s no 80% rule to threaten your lap count or getting your money’s worth. Heck, some years the promoter even encourages all racers to do the same number of laps—lapped or not. It’s a low-key way to ease back into riding, or close out the season. With his wheel off the ground, Steve Tamanaha is holding off a hard chasing Jonathon Hunt and trying to hold the wheel of John Elgart. Despite five or six Cyclocross National Championships, Elgart races Rockville just as seriously as any title race, and will likely outsprint racers one third his age for the holeshot. © John Silva

Sure, you might miss the chance to hone your passing skills without a massive field to fight through and a poor call-up position to start your race, but don’t make the mistake of thinking your handling skills won’t get a workout. Especially when muddy, Silva’s tight, technical course becomes an exercise in line choice and driving that demands your full attention. The typical course layout offers a whopping 35 turns, a short, tricky descent and climb, and some singletrack through the forest. “We are fortunate to have a fun and challenging venue,” promoter Silva said. “When it’s wet, as it has been this season, the course is as technical as it gets with lots of super slippery, sharp turns and power sucking mud. It is definitely a bike handler’s course but with just enough flat, paved sections to not let the handlers get away.”

Make Way for Sundays and Relays

Interested? You can just show up at Solano Community College the next three Sundays (times and address below). Need more info? Take a step back in time. Promoter Silva encourages people to simply call his shop, or visit his personal Facebook page. Show up to one race and you’ll eventually find your way onto his email list. On Sundays, February 12th and 19th, the course opens for registration and practice at 8 a.m. The C race starts at 9 a.m. and the A/B race is at 10 a.m. The difference between A and B? A racers, if any are willing, continue on for a few more laps while the B racers heckle, share stories or beverages, or use the on-site hose to clean off the evidence of their play day.

Entry fee is $20. No license is needed. A warm-up race or second race is an additional $10. Need some on-site help with your bike? The Rockville Cyclocross series is joined this year by sponsor VeloWrench.

The last Sunday for the 2017 series is February 26 and plans include a mass-start race at 9 a.m. followed by a relay race, when racers of different speed and abilities are mixed to form competitive three-person teams. One year Silva and his wife Esther put together teams so perfectly matched the relays ended up with a 10-up final sprint. “The morning ends with a BBQ lunch and lots of arm chair racing,” says Silva. The BBQ is his way of giving back to the racers and sport he’s participated in dating back to the flooded 2002 Cyclocross Nationals in Napa.

“I’ve always been pretty community oriented,” Silva said when asked about his motivation behind dedicating his Sundays to serving up the small race series and ending it with a free meal for the racers.

It doesn’t go unnoticed. Each January and February, a small, dedicated group of cyclocrossers, appreciative of his community service, simply eat it up.

More info: call Rockville Bike between 11am – 5pm at (707)864-2453 or visit John Silva and Rockville Bike on Facebook at: http://www.Facebook.com/rockville.bike 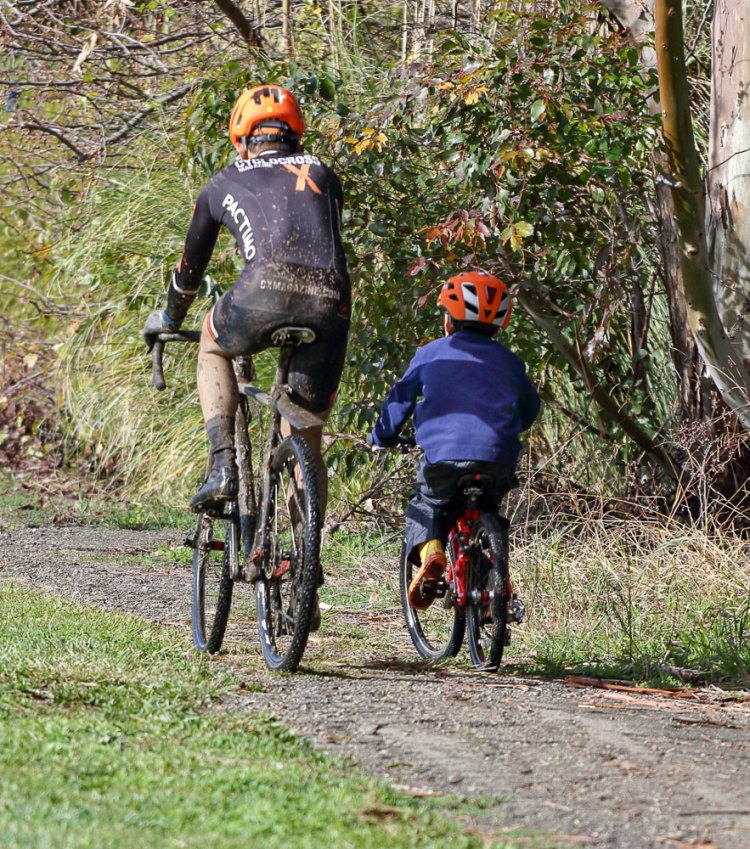