Jingle Cross 2016 by most measurements was a resounding success, with three days of top-level UCI racing, varied course conditions and a World Cup-worthy course with worthy champions. Unfortunately, for a number of participants in the non-UCI races, the experience left a lot to be desired simply because races were prematurely cut short, and without warning. For some, the combination of racing and spectating the World Cup is what drew them out to the Iowa City event from distances near and far, and the racing component of the trip wasn’t fulfilled by a race that consisted of only one or two laps. We’ve heard from a number of upset racers, but one prominent Masters racer (who raced David van der Poel in the UCI C1 race on Sunday) is trying to bring attention to this issue, and that racer is none other than bike racing legend Steve Tilford. Tilford discussed this issue on his blog, and welcomed Cyclocross Magazine to publish it here to encourage discussion and solutions. You can read the whole post in its entirety (with minor editing) below.

Update #1: Promoter John Meehan was not aware the 80% rule would be implemented at his event on Friday or Sunday, and told Cyclocross Magazine “We don’t like the 80% rule. It puts officials in a difficult spot, especially with multiple fields on the course, and takes away the fun and competition from the [amateur] participants.” Meehan emphasized he understands that Masters racers are critical to the event’s success, and that with the services and camera of One to Go timing services, accurate results can be achieved without pulling racers, and that will be the goal moving forward.

Update #2: USA Cycling has responded as well, saying, “We understand and appreciate our ’cross community’s concerns regarding the 80% rule. We are reviewing the application of the rule and, in particular, when and how it is implemented. We will have recommendations shortly to address these concerns.

Update #3: There may be some confusion as to the this article’s title. To be clear, we’ve used “Grinch” as in the Dr. Seuss character who (temporarily – apologies for the spoiler) steals kids’ joy during the holidays. It was not a comment on the costumed character who frequents the Jingle Cross race.

by Steve Tilford, via stevetilford.com

The ’cross season has just started and this stupidness is already happening. By this stupidness, I mean the scoring of the races. I was going to try again, to go through the proper channels, ie, contact USA Cycling, to try to understand why they continually don’t know how to score a cyclocross race.

Steve Tilford raced the UCI race and got pulled, but that’s not his complaint. He’s concerned about the interests of Masters who made the trip only to race one or two laps in his latest op-ed. 2016 Jingle Cross Day 1, Elite Men. © A. Yee / Cyclocross Magazine

The main problem, in my opinion, is that they don’t know how to apply the 80% rule. I’ve already written a rant about this rule. It is so frustrating for Elite and professional riders, but no one seems to address it for the Masters and other categories, where it always seems to applied really unfairly.

If you don’t know the 80% rule for ’cross, here it is, from from the USA Cycling Rule book:

5G. Finish
5G1. Before the start of a race, it should be announced whether lapped riders will be pulled or remain in the race. If riders are to be pulled, the following applies:
(a) Riders who have been lapped shall continue the lap to a designated location before the finish line and withdraw, under the control of the officials.
(b) The Chief Referee may, after consulting with the organizer, impose the 80% rule. Under this rule, riders whose time gap to the race leader is at least 80% of the race leader’s time for the first lap will be pulled by the officials unless it is the final lap. The number of 80% is merely an approximation based on a typical course; the intent is that all riders should be pulled before they are lapped.
(c) Riders who have been pulled because of lapping or the 80% rule will be listed in the results based on their position when pulled and the number of laps remaining. The results will list the number of laps remaining after the lap on which they were pulled.

Let me go back to January. I was at the 2016 Nationals in Asheville and saw that they were pulling riders when they weren’t even close to 80% off the pace. I sent emails to the officials and then directly to USAC. I didn’t receive a response from the officials, but finally received a response from Derek Bouchard-Hall. Derek seems concerned about the situation, but said that he was being assured that the rule was being enforced correctly. That was completely wrong.

But I didn’t post anything on it, thinking that they would work it out, but they didn’t really.

Flash forward to Jingle Cross. There are a ton of Masters. They kept altering the start times to try to get a even amount of riders on the course at the same time, which was good. I can’t really say that they were doing it exactly right.

They were starting the different age groups so closely together it turned into one giant 200-rider mass of guys walking in the mud a minute into the race. But I’m assuming their idea was for more riders to get to finish without big gaps between the groups at the start. But the leaders of the fields that started after the first group never had an opportunity to race at the start because of catching the back of the group in front of them so quickly.

Anyway, the scoring was horrible at best. Tons of guys pulled. Randomly it seems. Let’s look at the results from the Masters 50-54: 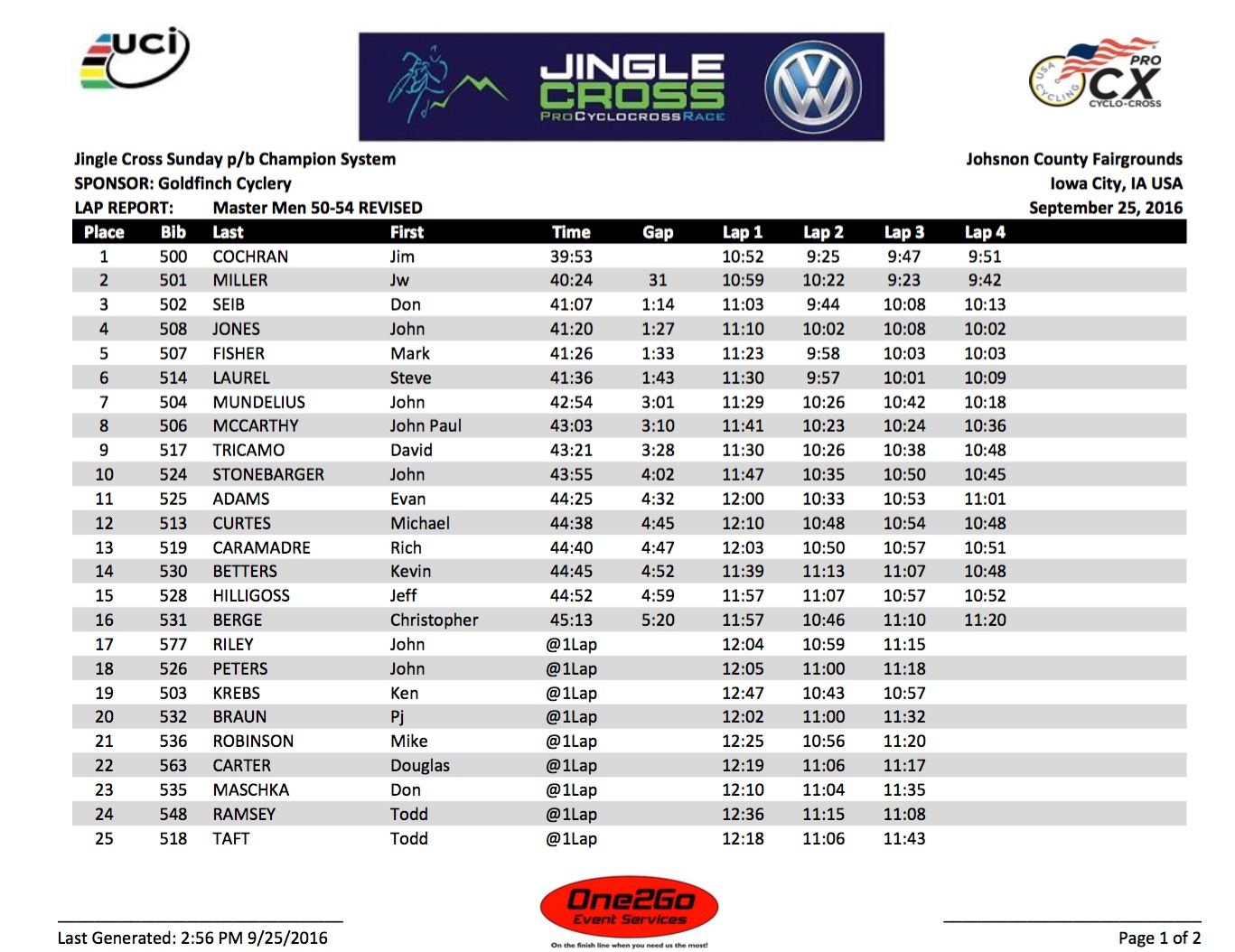 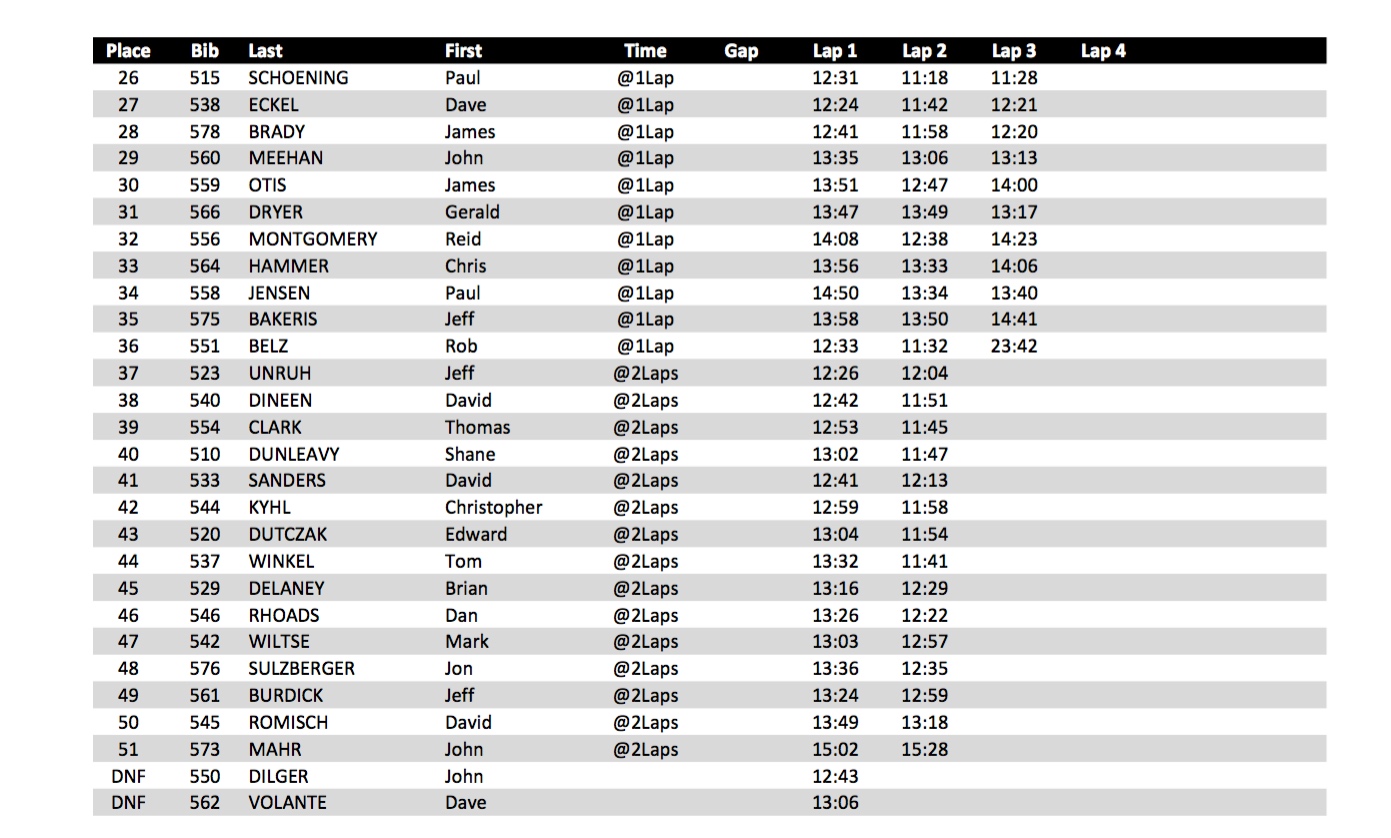 Lots of scoring errors here. We’ll start at the back, the riders that were put two laps back. Jeff Unruh is my friend and happens to be the first rider pulled at two laps at 37th place. He shouldn’t have been pulled that lap, or at all really. If you add his two laps times together, he was at 24:30. The leader was at 20:17. So Jeff was 4:13 behind the leader. Closer to 25% off the leader’s time. [Ed. note, the 4:13 gap would be 38.8% of the leader’s first lap time, still a long way from 80%] If the times stayed consistent Jeff might have been a little over eight minutes back after four laps. So, no chance of getting lapped, and he should have been able to complete the event.

But that isn’t even the worst of it. Look at the guys in front of Jeff. When you add their times together, Jeff was ahead of all the riders that were in 28th through 35th place at the time of getting pulled. But they pulled Jeff and then let eight slower riders do another lap.

And that isn’t even the worst of that. You can’t get pulled with one lap to go. So all the guys that were 17th to 36th were pulled wrongly. The reason for this is part b of the 80 rule. Part (b) states:

the intent is that all riders should be pulled before they are lapped.

You can’t get lapped if the leader has finished the race.

I do understand there were other categories racing on the course at the same time. But you can’t really pull a rider because a rider from another category who started way ahead of you might be lapping you.

I could post the results from the 55-59 Nationals in Asheville, and it is even worse. It is here or here. One group on the course and they were pulling riders who were less than five minutes down on a nine-minute lap. And there are 26 riders that were pulled with 1 lap to go. Twenty six guys who couldn’t get in the leader’s way because he is already finished. So they pulled them at 50% and then just kept pulling them.

Here’s the deal. These guys come to race a complete race. The guys getting pulled most likely never expect to win, but want to compete. Having guys ride 20 minutes and then get yanked out of the race doesn’t sit well with them, understandably. Especially when they are walking behind riders from other categories one minute into their event.

This 80% rule is so big races, like World Cups and World Championships, aren’t decided by a lapped rider getting in the way of the race leaders.

But somehow, the officials or USAC are using it as a mechanism to try to keep the races on schedule. At Nationals, they didn’t schedule enough time for each race, so the decided to just start pulling riders so the races finished quicker. Those guys deserve their entry back.

Here’s the deal. These guys come to race a complete race. The guys getting pulled most likely never expect to win, but want to compete. Having guys ride 20 minutes and then get yanked out of the race doesn’t sit well with them, understandably.

If USAC is trying to make its members content, then this isn’t the way to do it. They are lucky that many of the guys that are getting pulled don’t understand that they are being cheated. Either way, riders won’t come back to events where they get to race 20 minutes out of 45. They aren’t having fun and don’t get to race a complete race.

Here’s my solution. Just let the race happen. Let’s go back to the old days when everyone finishes on the same lap. Leave everyone in the race. Especially at local races. How are riders supposed to get better when they are riding less than half a race? If you good enough to win a ’cross race, then you should be okay with passing lapped riders.

Passing riders in cyclocross is part of the sport. It is a part of other sports. Look at Formula 1. Lapping cars is super important. And it is way harder passing in that sport than ’cross.

If you good enough to win a ’cross race, then you should be okay with passing lapped riders.

Cyclocross season is upon us. It is a participatory event here in the United States. I think everyone understands that. Just look at what happened to MTB racing. When the riders got disgusted, they quit traveling to the National events. The masses are the ones that pay for the sport. Let’s not let that happen to ’cross.

When guys come to bike races they assume that the scoring, i.e. the results, are going to be reasonably quick and correct. When officials apply this bogus rule, the results are nearly make believe. This 80% rule has no place in any race that isn’t a UCI Elite race, Nationals or above. Get rid of it for local events. It is bad for the sport. Just let them finish. Steve Tilford raced the UCI race and got pulled without complaint, but some racers got pulled with an inconsistent and inaccurate implementation of the 80% rule. 2016 Jingle Cross Day 1, Elite Men. © A. Yee / Cyclocross Magazine

Steve Tilford has won Cyclocross National Championships more times than we can remember in both Elite and Masters categories, and has been on the U.S. road Worlds team four times. See his blog and full palmares at SteveTilford.com. Have your own opinion on this or other topics? Op-eds are welcomed at hugsorhate [at] cxmagazine.com.