Since mid-September, UK-based racer Gabby Day has been on the East Coast in the US racing in the MidAtlantic and New England races, from Nittany to Nor’Easter. This Wednesday, she finished second at the Midnight Ride of Cyclocross in Lancaster, Massachusetts, and updated us on how her trip to America has gone so far. (Our favorite comment? When someone tweeted about the Midnight Ride of Cyclocross saying that when she heard Helen Wyman and Gabby about to lap her, all she could think was, “The British are coming! The British are coming!”) This weekend at Gloucester will be her last race stateside before she returns to Europe to race the World Cups. Gabby Day at the Midnight Ride of Cyclocross. © Benjamin Stevens

It’s taken some adjusting to racing in the US, but this week, I have had some better success. I have finally had that proper race sensation, where I feel like I am actually on it and everything flows well. It was a great feeling after my previous races where I felt pretty average at times!

I have been having a really great time in the US and as time to leave comes closer I am finding myself wanting to stay. I have found the whole cyclocross scene here so much more relaxing and less stressful, simply because everyone is so friendly. It’s been a perfect start to my season. I have met some amazing people and it has been so much fun travelling together as a big group to the races — it makes the whole race weekend so much fun!

Last weekend was another double weekend of racing. Saturday’s race was in Burlington, Vermont, which was a very beautiful place. On the Friday, a group of us pre-rode the circuit (it was a ‘ride with the pro’s’) with some of the local school children. The course was quite dry and fast with some nice turns, so I was excited about racing the next day.

However, with some heavy rain overnight, the course turned into a complete mudfest. So it was going to be purely about power and not crashing! I got a great start and was riding comfortably in second and third position until I had some issues … I think mud tires may have been good, but at least only having Grifo tires makes my decision before each race rather easy, as I can be quite indecisive at times! Unfortunately, I slipped into sixth position after a few slips and slides and felt rather discouraged on my last lap … I guess I let my head decide how I should ride!

After a quick wash and repacking of the car, Jeremy, Shaun, Molly (The Girl With The Cowbell Tattoo), Donny (from the Newly Elite column) and myself took off towards Rochester, New York … a long drive but we broke it up by stopping at a hotel after four hours. I have to admit that I was not particularly keen on racing the next day. Saturday’s race had been so hard and intense and my bikes were still suffering the effects too! But after racing Rochester and having a pretty good race finishing fourth, I was very happy that I rode. Considering how I felt before the race, I was pleased.  My housemates also rode great too, so it was a pretty good weekend.

Last night was the Midnight Ride Cyclocross race in Lancaster, Massachusetts. It was to be my first ever night time cyclocross race, so I was excited. My race started at 7 p.m. and the guys race was at 8 p.m., so it was very late (and dark) racing. I pre-rode the course with Jeremy and we loved it. It was a fun course with lots of cool corners that you could ride nice and fast. Anyway, I finished second, but was so close to first. After the first lap, I led the race right up until the final part of the last lap. And then, I ended up sprinting for the win with Helen Wyman … my head wanted it, but my legs just couldn’t quite make it! I was so happy with how I raced, my legs felt great and everything just flowed nicely. I rode the corners fast and smoothly and most importantly had fun. Thanks to all the support on the course!

I now have less than a week before I fly back home but before then I have the Gloucester GP, which I am told is a pretty big deal! So I hope I continue to ride above average from now on … Americans Bested at the Midnight Ride of Cyclocross as Wyman, Millburn Capture Wins 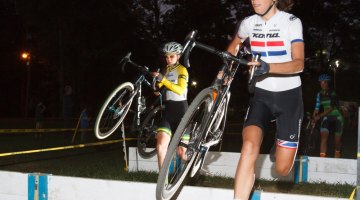