The Girl With The Cowbell Tattoo: The Things We Do For ’Cross

I have two of the greatest sponsors in the world. Not only are they both 100% invested in my racing and incredibly enthusiastic about it, they provide services like keeping my bikes in great working condition, making sure that I’m eating enough and if I ask nicely, even doing my laundry.

I’m talking, of course, about my parents. When I was on the phone with Josh, the man responsible for bringing you the print version of Cyclocross Magazine, for our weekly phone call, I mentioned that I had recently moved. “Where?” he asked, not realizing what an awkward question it would be for me.

I muttered, “Back in with my parents.” I have no problem with having moved in with them, but when explaining the living situation, it feels strange, particularly when talking to people who are (sorry, Josh!) a bit older than me.

However, he was unfazed. “That’s awesome! It’s like you have two amazing sponsors for the season. You should write a column about it.”

Finally, someone gets it.

This has been an odd point of pride lately: I lived away from home for the past six years, and now find myself under the same roof as my parents again. I recognize that it’s for a very good reason, but at the same time, when talking to people I work with, who are typically own their own homes, I still feel odd saying that I live with Mom and Dad.

However, as per previous statements, I had no qualms with the decision to move home. My lease on my college apartment was up September 1, I work from home and the cyclocross season starts just days after my lease ended. And moving back to my parent’s house only meant moving 40 minutes away, not having to apartment hunt in … well, in somewhere, which is a whole other can of worms. I don’t know where I want to live in the next year, and deciding while trying to travel for cyclocross (for fun and profit!) seemed like a bad move. So, I did what every mature 24-year-old with awesome parents does, and moved back home.

And you know what? I think I’ve gotten faster. I knew my cyclocross season would be easier and better living at home, but it turns out it’s even better than I could have imagined.

I have room in the garage for my ever-growing fleet of bikes and piles of kit that I’ve finally started amassing in bulk. I can organize my shoe collection and not have the apartment smell like a Dumpster. The kitchen has counters, with space for a coffee grinder and French Press. I have a backyard!

If you’ve been following this column, you know how awesome my dad is, and how supportive he is of my cycling “career.” My mom is the same way, though maybe not quite as angry-sounding when she cheers for me during races. So moving home is not the worst thing that could have happened. Dad already has a rough schedule worked out for when he and I will practice skills at the park, Mom and I are doing yoga together on Wednesday mornings and my wonderfully crazy dog Faith is serving as my surrogate coach since Sean is in Massachusetts. When I go to practice barriers, she sits and observes, glaring at me and occasionally woofing if I fumble and kick the PVC barriers over. 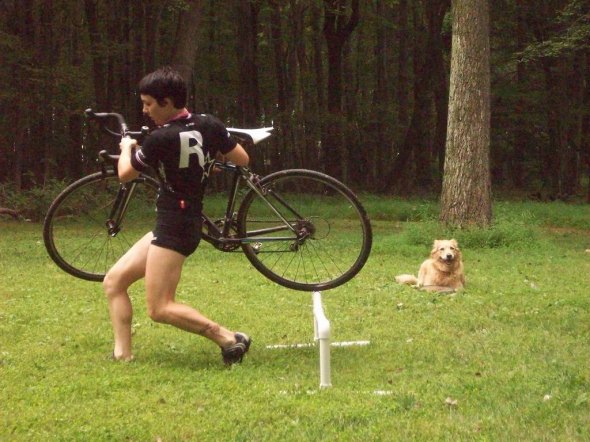 Practicing the barriers with my coach/puppy supervising. © Rob Martin

Of course, my parents get paid back by having someone around to do manual labor when they need it: this summer, I tackled the garage, basement and attic. It turns out getting a dining room set into a garage loft space feels a lot like VO2Max intervals.

I’ve only been back a week, but so far, so good. I wake up and get to cook my steel-cut oatmeal and make my coffee, then sit on the back porch while the sun comes up and get some work done. Then, the backyard turns into a ’cross course for 30 minutes while I painfully work on skills, taking cues from the Keoughs by running barriers without the bike, then adding the bike in, and trying to work on perfecting my Myerson-inspired dismounts. Then, back to work in the room that I grew up in that has since transformed into the smallest bedroom/office combination in the world. Afternoon means lunch with my sister and the dog on the back porch again, and then out for a ride. Western New Jersey has a lot nicer riding than my old hometown of New Brunswick, so I can ride without (much) fear of cars/muggers. The evening finishes out with more work.

It’s never-ending when there’s world-wide cyclocross news to report on! It’s already cyclocross season in Australia, and one of my favorite reports, Brendan Bailey, has been providing play-by-play reports of the Dirty Deeds series. Plus, with the season starting in just a few days, there are press releases coming in at the speed of light, pre-reports to get done and of course, my own personal race prep.

The other bonus to living back home? It’s only 45 minutes from the venue where Nittany is being held this coming weekend. That means that yesterday, I picked up Euro Invasion cyclist Gabby Day (see upcoming Issue 14!) from the airport for a week of staying at at my house, and this Friday, what can only be described as a horde of cyclists will descend on our house and set up camp until Monday.

So if you’re in the same boat as I was (you know, stay-at-home workaholic editor with delusions of grandeur surrounding your racing season), consider a move back home. It will increase your power by at least 15% while reducing your coolness quotient by a mere nine percent. I’m willing to risk it.

Now, if someone could just explain to my 90-year-old neighbor that me running over barriers in the backyard isn’t crazy, life would be pretty darn perfect.

Tell me: what’s the craziest thing you’ve done for cyclocross?

Next post Urban Ecology Of A Stolen Cyclocross Bike