Raleigh Bicycles has flamed the fires of singlespeed cyclocross racing since releasing its first SSCXWC-themed frameset that we announced in 2009.

Since then, the Kent, Washington-based company has maintained its involvement in singlespeed culture and racing, with limited-edition alloy, carbon, and steel singlespeed framesets and sponsorship of SSCXWC editions as well as the flame-broiled and bourbon-infused Louisville SSCX Derby.

Now, thanks in part due to its one-gear evangelism and sponsorship, and perhaps encouraged by a nudge from competitor’s bike with a phonetically similar name (see Issue 24 for a full review), the singlespeed movement is big enough to justify a complete production singlespeed cyclocross bike. The result is a stunner, and it looks like no small detail is overlooked. Given our Facebook Fans’ reaction and shares to the RXS photo we posted during Sea Otter, Raleigh may have built up a winner.

For the new 2015 RXS, Raleigh leverages its redesigned aluminum RX platform, with its updated 2014 geometry (lower bottom brackets than 2013 models, tapered steerer). In choosing the build kit, Raleigh pulled out all the singlespeed stops for its new alloy RXS, with the lightweight Gates Carbon Drive drivetrain and TRP’s Hylex hydraulic disc brakes and levers. We love the long hood shape of the Hylex levers and find the one-finger braking to be addictive. The RXS, with its CXM’s Editors’ Choice award-winning geometry (2014 RX 2.0), should be race-ready out of the box. The TRP Hylex brakes will help you brake late and preserve momentum, while saving hand strength for that run-up hand-up. Clement MXP (another CXM Editors’ Choice) clinchers grace 23mm wide rims, and a generic crank keeps you moving forward. A two-bolt seatpost (Amen!) will keep your saddle in place, while a Raleigh 200 series alloy stem and bar handle the controls. Raleigh’s RXS features the awesome TRP Hylex hydraulic brakes and levers. Could be a good reason alone to reach for this bike. © Cyclocross Magazine

The Gates Carbon Drive keeps maintenance and carrying weight low, but makes changing gears a bit more expensive. But isn’t the beauty of singlespeeding the simplicity of “run what ya brung?”

It’s worth noting that if you own a RX 1.0 or RX 2.0, the geometry on the RXS may feel a bit different, due to the eccentric bottom bracket. Depending on its position, the bike could feel like its chainstays are longer or shorter, and the bottom bracket height is higher or lower, and this will also vary based on rear cog size (for a given belt). Should you get tired of that one gear, or the fun-loving hooligans in your field, you can always add a derailleur hanger and go back to geared racing. The frame relies on a PF30 eccentric bottom bracket for belt tensioning. 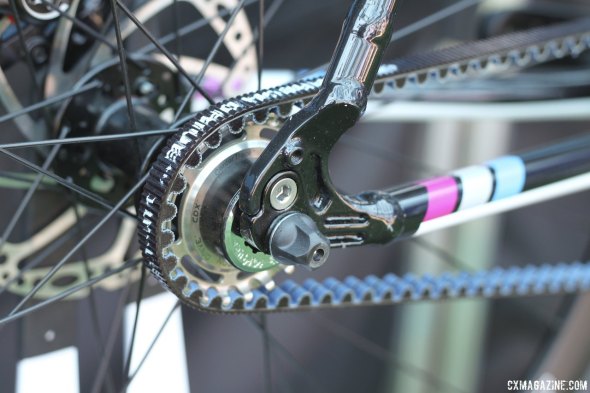 Gates Carbon Drive is lighter and low maintenance, but the frame will accept a rear derailleur hanger. © Cyclocross Magazine

MSRP is not set yet, but we expect it to be under $1600 for the complete bike. Stay tuned as we bring you more details, and put one to the test. Have tattoo aspirations? There should be plenty of time to get one in time for October 25.