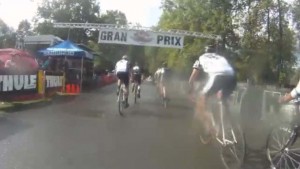 Cyclocross Magazine contributor Kenton Berg’s StarCrossed POV video was well-received by viewers, so here’s another from the following day at the Rad Racing GP. Kenton went on to finish eighth with an impressive ride as he started slowly and continuously picked off riders.

On another mixed-bag weather day in the Seattle area, the rains of the morning gave way to some sunny skies as the Men’s Singlespeed group lined up ready to slide around a sinuous and challenging course. A lead pack of five riders moved away early on the first lap and would not relinquish that lead. As Monsoon-like rains blitzed the riders on lap two, StarCrossed Single Speed runner-up Louie Fountain (Mod Velo) and Ian Crane (Hagens Berman) would emerge from that lead group to battle for the win. As they crossed the finish line Fountain had rounded out his weekend with a victory, Crane was close behind in second, and Jason Williams (Team Stanley) would hold on to the third spot.

Check out the video of the action below, after the jump.