Jeremy Powers waited to make his move at Kings CX, and when he attacked, it was game over for the rest of the field. © Ali Whittier

Jeremy Powers (Aspire Racing) continued his domestic UCI C1 race dominance with a commanding victory at Kings CX, while in the Elite Women’s race, Katie Compton (Trek Factory Racing) appears to have regained the form that has made her an 11-time National Champion, easily dispatching her competitors and winning solo with a healthy gap.

Use the slider below to read race reports for Elite Men, Elite Women and Juniors, and be sure to tune in tomorrow for a live stream of the Pan-American Continental Championships, starting at 11:45 a.m. EST. 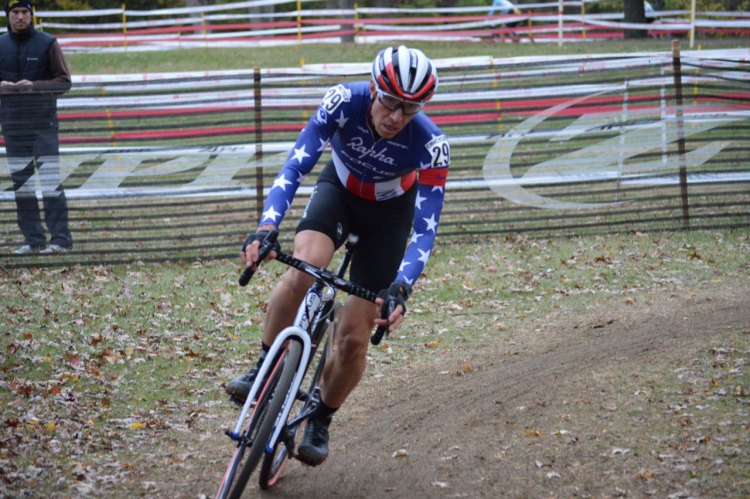 Powers quickly went on the offensive, shaking White from the lead group. Hyde was able to match Powers’ acceleration, and remained glued on his wheel as the duo established an insurmountable gap to the chase group.

Powers’ pace became too much for Hyde, who was distanced, but was able to keep the gap around 10 seconds, and keep the chasing group at bay. In the chase group, Trebon and Owen were able to distance Driscoll and White, and go clear to fight for third place.

Consistent as usual, Powers kept his pace up and his racing clean to maintain his ten-second gap over Hyde. Powers crossed the finish line with enough time to post up for victory.

Behind Powers, Trebon closed quickly on Hyde, but ran out of real estate, finishing a strong third place. Owen and Driscoll rolled in shortly after to round out the top five.