Nikki Harris was a crowd favorite, although domestic riders and international stars alike were given a great reception by Milton Keynes. © Andy Ward.

Yesterday, Milton Keynes hosted the first World Cup event to be held outside Continental Europe. The Elite Men’s and Women’s Races were both filled with high tension right down to the wire, with Sanne Cant edging Katie Compton at the line, and Kevin Pauwels taking the win in the finishing stretch.

With a podium finish by British racer Nikki Harris and the best ever result by men’s rider Ian Field, the country can certainly hold its head high by nearly every measure. Our on the ground correspondent, Phil Ingham, was able to talk to some of the British elite racers and the event organizer, Simon Burney, to get their impression of the day.

“That was the most incredible experience I’ve had in a bike race,” Wyman told Cyclocross Magazine. “It was unbelievably loud, cheering my name! The race itself, I rode some good bits, I had a few crashes and that kept putting me back. The form’s good!” 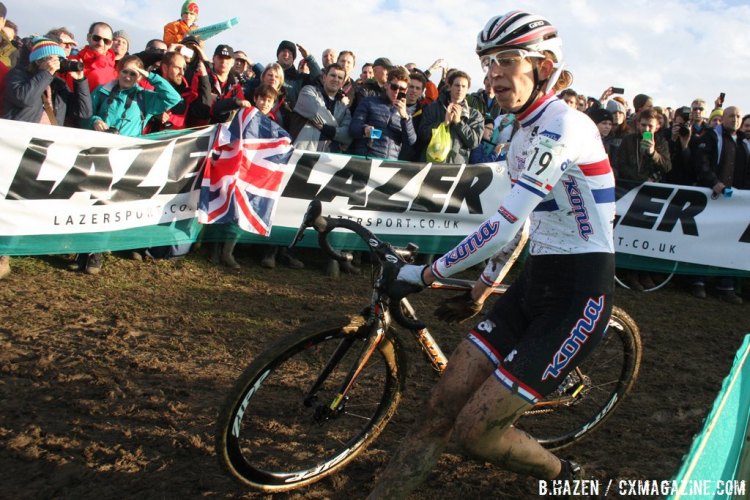 Helen Wyman was given a royal welcome at Milton Keynes, with flags and cheers on every corner. © Bart Hazen

On riding in front of her first home World Cup crowd: “It’s just different. Everyone knows who you are. People want your autograph, they want their photo with you, they are really excited to be part of what you do!”

On the significance of the Milton Keynes event: “I think this World Cup is already a huge success and I want them to have it again and again. Everyone that’s here, all the Belgians and Dutch riders are saying ‘mega course’, ‘mega spectators. This is what we need when we move out of Belgium, this is professional, this is how we globalize our sport. I said to Peter (van den Abeele) at the start, ‘You’ve got to make this a World Champs before I finish my career!”

On her frustrating start to the race, and the events after: “I had a strong second half to the race. The start was sort of crazy – you come off the road and they you’re straight away into slippery off camber. I got held up quite a lot there. People were crashing everywhere and it was just a matter of running and trying to pick your way through. Second lap I lost my chain and I was ages trying to put it back on and people were coming past me. The second half of the race was better and I was starting to feel stronger and moved back through. I finished 18th, 19th which wasn’t quite what I wanted but it was the best I could do today.” Gabby Durrin had a rough start, but followed it up with an impressive second half race. © Bart Hazen.

On the crowd and atmosphere: “It was louder, amazing, incredible, the best we’ve ever had. We had so much support. It might as well have been a world championships.

On the subject pf whether the World Cup should continue to come to the USA: “I think going to America would be really great and make it a much more global thing.”

And on the inevitable comparison between the crowds at Milton Keynes and the Louisville World Championships of 2013: “I would say this was as good or better. Louisville was amazing and this was really special. Everyone is really supportive and that’s what’s nice about racing here or America. It doesn’t matter where you are in the race. People are very supportive of you. I you’re having a bad day people are still cheering for you, whereas in Belgium, it’s more quiet if you are having a rough day.” Ian Field had the most impressive World Cup showing of his career in his home country. © Andy Ward.

On how the day had gone: “Busy, stressful, successful!” he laughed. “It’s been great. A lot of people showed up and two great races. Great finishes for both of them. Really challenging course, which is what we were trying to achieve. A good day for everybody, I think!”

On how had the course ridden: “I didn’t think it would be so close at the finish of both those races, just because of hard the course had become. It had definitely changed since yesterday, a lot slippier, with a lot deeper, stickier mud. We wanted it to be a hard course even if it was dry and fast, but with the weather we’ve had in the last week, it compounded that (the mud).”

On the event returning in 2015: “Too soon to say, from my point of view and from the point of view of the Milton Keynes city with the budgets. We need to make sure that everyone is happy, and that they want us to come back and if they do we’ll  discuss if it’s possible. And of course we’ve still got to run it past the UCI and see if they want us to be part of the World Cup again.” On the size of the crowd: “Seven to ten thousand and that was enough to make it look busy and give it a great atmosphere, which is what we were looking for.”

Next post Cant Can't Be Stopped, Van Aert Gets a Win at Flandriencross Hamme: PBost Bank Trofee, Round Three