Pauwels has dialed in the World Cup so far this season, joined at the podium with Van der Haar and Walseben. © Bart Hazen/Cyclocross Magazine

NAMUR, Belgium – Kevin Pauwels (Sunweb-Napoleon Games Cycling Team) took the win at round four of the World Cup in Namur over Lars van der Haar (Giant-Shimano) with a decisive move in the waning minutes of the race. The win adds to Pauwels series lead, now 77 points ahead of second place Tom Meeusen (Telenet-Fidea) with two races remaining.

The big news before the start of the race was Sven Nys (Crelan-AA Drink Team) opting not to participate. Despite a long recovery, the Belgian can’t understand why his legs still feel fatigued, and is staying out of racing possibly until the National Championships, maybe even longer. Jeremy Powers (Rapha Focus) was able to take a front row call-up, a place now familiar for the American this year at the World Cups. In the center of that row, Meeusen and Van der Haar battled for the holeshot, with the Telenet-Fidea rider grabbing it by the first corner. Powers was able to maintain his position, floating between 10th and 13th in the early half of the first lap.

Swiss rider Marcel Wildhaber (Scott-Odlo Mtb Racing Team) and German Sasha Weber (Veranclassic – Doltcini) took over the race, even creating small gaps after the punchy descents that didn’t allow much room for error. Corne Van Kessel (Telenet – Fidea) dismounted more often than others, which didn’t appear to be a bad strategy as he maintained a top-five position. Van der Haar and Pauwels spent the last third of the race battling each other for the win. © Bart Hazen/Cyclocross Magazine

Almost halfway through the race, Meeusen stormed forward once again, initially with Van Kessel at his side, creating a gap that looked menacing if it stuck. Van der Haar wasn’t going to let Meeusen take the day, and was the first to give a legitimate chase, hopscotching Van Kessel to make the catch. Pauwels, and then Van Kessel, joined the leaders shortly after before Van der Haar made several major breaks to gap the small group. The surges put Meeusen in the red and he lost contact, dropping to fifth position behind German National Champion Philipp Walseben (Bkcp – Powerplus). It was now up to Pauwels to close the gap to Van der Haar with Van Kessel right behind. But Pauwels was the only rider able to make the catch as a hard fall suffered by Van Kessel took the wind out of his sails. He did recover but was unable to eradicate the loss, finishing 1:38 down to take fifth place behind Meeusen. Walseben weaved past on his way to third, keeping the lead duo in his sights. In the end, Pauwels was able to take the win with a last minute surge, compounded by a series of mistakes by Van der Haar on a long off-camber section.

American Jeremy Powers came in at 16th, over 3:30 minutes behind the leader, but keeping him in the top-15 for the World Cup standings. Jonathan Page also had an impressive ride, taking 18th. Fellow Americans Jeremy Durrin and Robert Marion were also present, but struggled today as they took 56th and 57th. 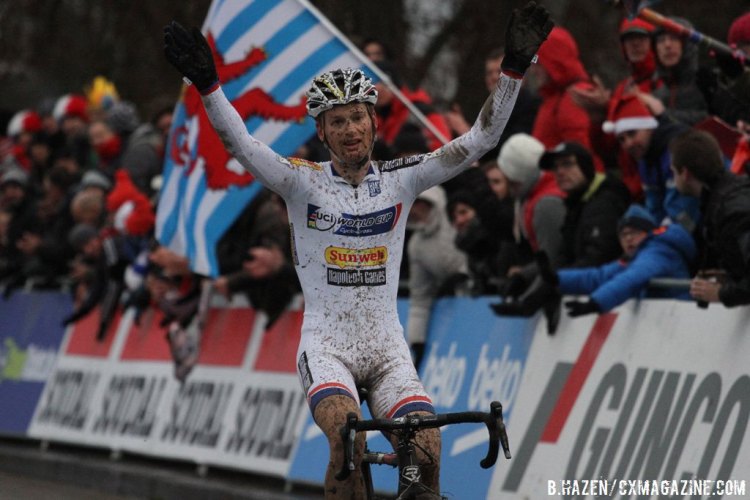 An elated and exhausted Pauwels crosses the line for the win. © Bart Hazen/Cyclocross Magazine

The women’s elite race and full results are also available.