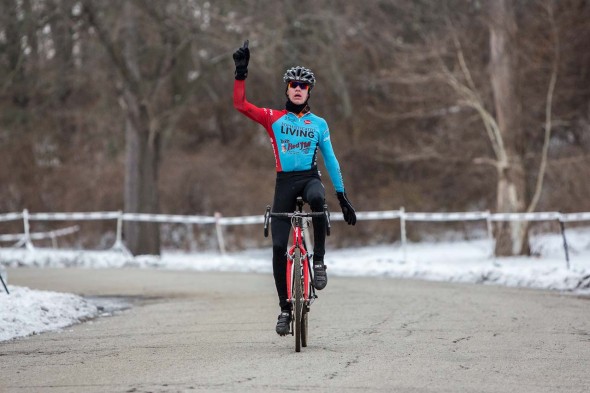 INDIANAPOLIS – With a combination of snow, ice, and mud, the OVCX Series Finale in Indianapolis provided the perfect cap to a season that tested riders in all conditions.  Brookside Cross Cup began 13 years ago in almost identical conditions.   The race at Brookside Park, sponsored by SRAM, BGI, Flat 12/Shamrock Cycles, and Bier Brewery, solidified the fact that OVCX juniors continue to impress more every season.

Beating all the top Elite riders in Ohio, Kentucky and Indiana all season, 16-year-old Chloe Dygert (Midwest Devo) took the Women’s Elite overall with a win in Indy.  Doing similar was 15-year-old Spencer Petrov (Sophisticated Living/Bob’s Red Mill), taking his third win in the Men’s Elite race and the series overall.  With the Brookside race putting a close to the OVCX regular season, all eyes will be first on Europe, then on Boulder, Colorado as series top riders are tackling, first Christmas Week in Belgium, then the U.S. Cyclocross Nationals.

With a paved uphill start funneling into an icy, slick, tight, off-camber right hand turn around a park fence within the first few hundred meters, getting the holeshot was more important than ever. Chloe Dygert (Midwest Devo) slotted into third after the first bottleneck, but skipping a pre-ride in order to stay warm in the low 20 degree temperatures, she said, “It was tricky knowing which line to take.”  Despite falling twice, she was able to recover and punch out a gap that she would extend for the win.  Marian’s Karas wrangled second away from a hotly contested battle for the top five.  With many lead changes, Adams won the sprint for the final podium over fellow U19 rider Dobrozsi.

The men’s race proved to be one of the most exciting all season with a group of seven to eight riders coming together, blowing apart, reuniting and then shaking out again for the final few laps.

According to fourth place finisher and cycling coach Ryan Gamm (Ohio Valley Velo Sports), “Races like last Sunday’s at Brookside are deceptively strategic. The low temperatures present a metabolic stress similar to altitude.  If you push it too hard, you are not going to recover. Combine the snow, ice and muddy mud conditions along with a course with few opportunities to gain time, but many places where time can be lost, the race becomes a game of flirting with the red zone and not losing any time.” Petrov made the most of the freezing temperatures, snow on the ground, and the limited passing lanes.  While Messer took the lead into the first choke point, Petrov and Haley ducked in behind.  Halfway through lap one, Francisco made a move to the front on the tricky, long, slick, off-camber descent in front of the stairs lined with tents and boisterous end-of-season celebrating spectators.  Petrov sensed the urgency and, on foot, passed back up the stairs, eventually taking the lead by getting by Messer on the flat ground at the top.

Dramatically, the leading group of six to eight yo-yo’d with different leaders and stragglers clawing to get back on for a few laps.  With three to go, it was the crowd that sparked the fireworks.  According to Petrov, “I got a small gap on top after the run up and then I heard someone yell.  I accelerated, wanting to get a gap.  It turned out Gavin had flatted.” With two to go, Petrov again attacked at the top of the steps and extended the lead for the win over Anderson and Haley.  In a bit of irony, Anderson’s second place overall this year matched his second place overall at the first Brookside cross event 13 years ago.

After another huge growth year, the final series race in Brookside is far from the end of cross season in the Ohio Valley.  It’s just all “away games.”   Three out of the 16 riders selected for the 10th annual EuroCrossCamp in Belgium were from the OVCX series.  Ian McShane and Drew Dillman, both of the Sophisticated Living/Bob’s Red Mill team along with Red Zone Racing’s Gavin Haley, are joining what is now a very select and prestigious club within the OVCX junior racing community.  Fifteen riders over the past seven season have made the select EuroCrossCamp roster.  Haley, Dillman, and McShane will participate in five to six top-level events during the Belgian Christmas Week, including both World Cups.

After Belgium, our EuroCrossCamp juniors will travel back to the U.S. to join between 25-30 other OVCX racers in Boulder, Colorado for the 2014 U.S. Cyclocross National Championships.  With one National Champion, Thomas Francisco (Red Zone), and many more podium placers from last year’s event in Wisconsin returning at an even higher level this year, there will be many exciting races to follow in Boulder for OVCX fans.