Steve Fisher took the race and the series lead this weekend in Washington. © Geoffrey Crofoot

Seattle’s Woodland Park is the traditional home of the MFG Cyclocross finale. Located in the heart of north Seattle the venue often attracts more racers than any other race. This year was no different, with over 1250 racers. The course featured several turns, encompassed a majority of the park and featured two run ups; one of which was ride-able—for a time.

Rain fell on and off throughout the day—perfect weather for cyclocross—making corners slick and turning infield into a muddy mess. Few racers stayed clean, and only a few in the lower categories were able to stay up right.

Steve Fisher (Raleigh/FSA CX) and Russell Stevenson (Trek CX Collective) battled each other, the conditions and lapped traffic on a course that featured two run up–one was rideable for fitter riders at the start of the race– and several slick turns through the park’s infield. The duo battled it out for 60 minutes, trading the lead twice. Fisher eventually worked in enough of a gap to handily take the win from Stevenson. Bellingham’s Spencer Paxton (Kona) rounded off the podium. The women’s race began with the course already a mud fest. © Geoffrey Crofoot

It was difficult to tell lapped traffic from the category 1/2 women, but the absence of Kristen Kelsey (AXIOMHVAC-VOLER-Cycle U), who dominated several of the races, left room for other strong riders to find their way on to the podium. The top spot went to DFL Racing’s Monica Llyod, while Team Group Health’s Marisa Daniels took the second spot. Heidi Wood (333Fab CX Factory Team) got past a series of races in which she just missed the podium and landed on the third step this week.

Heidi Wood’s (333Fab CX Factory Team) consistent performances were enough to give her top honors for the series. Monica Lloyd (DFL) and Julie Robertson Zivin (Cycling Northwest) finish the series tied for second place, but Lloyd’s win at Woodland Park gives her the edge in the tie-breaker.

Twenty-Five racers and MFG staffed returned to the park next day to help clean up and rake at the annual clean up party, which was sponsored by NUUN Hydration, keeping things koser with city and ensuring Woodland Park will host again next year. End of the season awards will be given out on November 20th at Hale’s Ales Palladium.

Although not a part of the series, the newest UCI cyclocross event on the Pro CX Calendar will be held early next month, hosted by MFG, in place of the traditional finale in Bend. 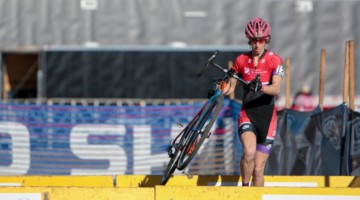