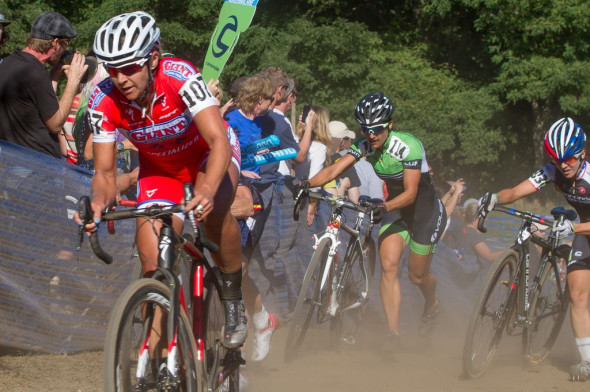 Miller battles her way to the lead of many cyclocross races. This season, expect to see her wearing a new Noosa kit and riding a Focus Mares. © Todd Prekaski

Before the 2013/14 cyclocross season began, Meredith Miller announced her retirement from road cycling. Over the next half-year, Miller racked up impressive wins along with great showings at major races, including sixth at the World Cup in Tabor, fourth at CrossVegas, and a solid third place at the National Cyclocross Championships. While she made good on her retirement from professional road cycling for 2014, Miller displayed her passion for cyclocross this week by announcing her co-ownership of a new team with Allen Krughoff. We were able to catch up with her about plans for the season and the big changes.

Cyclocross Magazine: The first big surprise is Noosa Yoghurt as a title sponsor. We take it that the company is headed by people passionate about cycling?

CM: Both you and Krughoff will be the new team managers and co-owners. Can you explain to our readers what that entails?

MM: That means we will be doing everything. About six weeks or so ago, Allen and I ran into each other and talked about the cyclocross season and what we’d be doing. We didn’t necessarily have plans. We were like, “You know, how about we start something together?” And we started reaching out to people for cash and products.

Things began coming together pretty quickly and we realized we were committed. We will be the ones creating the pitch letters and proposals, and we’ll have to be the ones having conversations with anyone involved: all of the day to day business stuff. We have help with our social media so we can keep up high expectations with our partners.

Otherwise Allen and I will be building this team from the ground up. We’ll have two mechanics working for us, and we’ll be organizing the logistics, the travel, and the equipment; everything from the top to bottom to make sure this program is successful. Meredith Miller, running through the sand at Worlds, said she will focus on domestic races, but will also try to represent the United States once again. @ Bart Hazen

CM: Do you think you’ll enjoy these new responsibilities?

MM: I think so. I’ve been part of the Cal Giant program for the last six years, and I appreciate everything they did for me, even my first year just wanting to have fun and seeing what cyclocross is about. For the most part, I didn’t have to worry about anything except riding my bike: training and racing.

I’m grateful for what they did, but at this point, at my age and time in my career, it will be nice to have control of my own team, and more importantly, figure out where to take this next, build something bigger and better. I would like to take on more responsibilities, especially when I stop racing and do actually end up retiring. Eventually I would like to add more members to the team instead of just two people.

CM: We also noticed the press release placed a big emphasis on domestic racing this season. Will you be considering overseas locations like Milton Keyes or the UCI China race?

MM: I don’t think we’ll plan on the early season stuff just yet. Noosa has given us a good start to our budget, but we need a little more to get things done the way we want them. Europe isn’t in the cards yet. If Allen and I are doing well, and either of us is vying for a spot on the world’s team, then we might go to Europe, but right now we will be focusing domestically on the C1 weekends.

The faces of the new Noosa cyclocross team.

CXM: You’ve been riding since March without a training plan, what does that look like?

MM: This has been the first time in twelve years that I haven’t had a pretty strict training schedule. I got on the bike a month after worlds and I’ve been having a lot of fun, adventure rides. Some weekends I’ll find myself on my cross bike, mountain bike, and road bike. It’s about having fun and recharging the system. Back in the early Spring, I rode all of the stages of the Tour of California with the Rapha Ambassador Program. This past weekend I did the Rapha Gentlemen’s Ride. I’ve also done a few mountain bike races. So I’ve really been all over the board.

I’ve been riding a lot in the Boulder area and exploring new roads. Usually, under a strict training plan, you go to the familiar areas to do your intervals, and since I haven’t been doing those, I can pretty much go wherever, and it’s really been a lot of fun. I think for me it will have done a lot for me mentally and give me a good base, which I really haven’t had before because it has always been “On, On, On.” Hopefully it works for me.

Stay tuned to cxmagazine.com for more elite racer interviews, including one with Miller’s new teammate, Allen Krughoff. Also be sure to subscribe for Issue 26, where we reveal the pros’ favorite cyclocross destinations and courses.

Next post Technique Thursday: Give Your Legs a Rest by Getting Out of Your Saddle