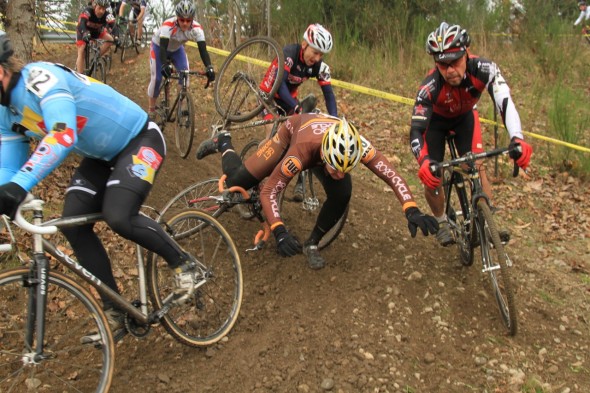 The final race of the Seattle Cyclocross Series took place Sunday at the Fairgrounds in Monroe, WA. Significant rain fell the few days before the race and despite some sunshine, the course had its mud and slick spots. Utilizing the small elevation gains on the property, the course had racers working through mix of twisting turns, off-camber areas, a short run up, a mud pit, and some packed sand. With double points and series overall titles on the line the course and conditions would help make for an interesting day of racing. 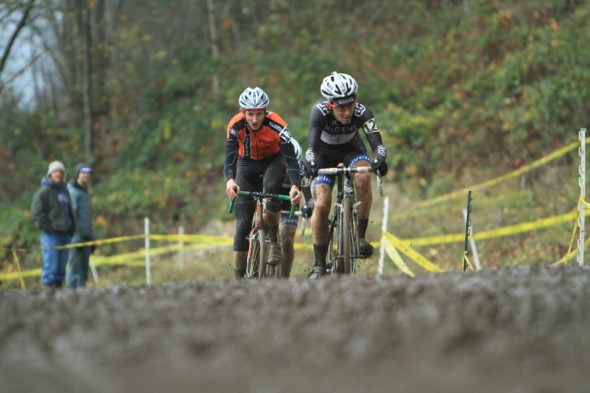 The Elite Men lined up after most of the morning fog had burned off and the course had been significantly beaten up by the earlier racers. This would not deter Gian Dalle (Don Walker) for making a run at the overall title as he came into the day leading by over 50 points. A strong finish would seal the overall deal for Dalle but he would have to face off with Steve Fisher(Hagens Berman p/b Raleigh) whom he had not beaten yet this year. After some early race sparring with Dalle, Fisher and teammate Newt McGrath would light things up and distance themselves from the rest of the field. Dalle would come in over 3 minutes back of Fisher but that was still good enough to take the overall series title. Toby Swanson (Eatonville Outdoor) would capitalize on his consistent riding to take third on the day and finish 2nd overall in the series. Fisher’s three wins and a second in his four races this year were enough to propel him into third in the overall series standings.
Final Series Overall Standings:
1. Gian Dalle (Don Walker)
2. Toby Swanson (Eatonville Outdoor)
3. Steve Fisher (Hagens Berman p/b Raleigh) Courtenay McFadden smiling as she hammers to another win. © Janet Hill

The Elite Women would line up after the men finished and this would be another race with the series title on the line. Coming into the final race Marsa Daniel (Group Health) was working with a 44 point advantage over Kristen Kelsey (CycleU/PopCap) and would have to keep her in her sights to avoid a final race collapse. Courtenay McFadden, winner of every SCX race she had entered up to this point, would be in attendance as would Kari Studley (Redline) and both would be a factor on a course with speed and technical sections. As has been the case most of the year McFadden was flying right from the start. Studley, Kelsey, Mel Lewis (CycleU/PopCap), Andi Zolton (Kirkland Bicycle) and Daniel would all give chase but would end up fighting for the final podium spot as McFadden and Studley were not to be caught. Lewis would end up the best of the rest and would capture that final podium spot on the day. Daniel would hold on to her lead for the overall title as Kelsey made gains on her points-wise but it wasn’t enough to over take her and Lewis would cap off a solid year by taking third overall for the series.
Final Series Overall Standings:
1. Marsa Daniel (Group Health)
2. Kristen Kelsey (CycleU/PopCap)
3. Mel Lewis (CylceU/PopCap)
Congratulations to all the other series winners and those earning upgrades for next year. For final results go to http://seattlecx.com/results/2012-2/scx7-monroe/ Mushrooms and fog greeted the racers for the final SCX race. © Janet Hill