In the elite women’s race, Courtney McFadden (Pivot-Maxxis p/b Stans NoTubes) and teammate Ruby West found the front on lap one with a strong, early push. With the course in the opposite direction from Saturday’s competition, there were some major differences in elevation and the way the course rode. “Today was a bit physically harder of a race,” noted Fahringer. “Instead of the climbs being more punchy they were really drawn out.” Countering the first lap surge from the Pivot-Maxxis duo of McFadden and West, Fahringer took over and maintained the lead for most of the race, with McFadden aiming to keep her in check. Conditions were much drier for Rebecca Fahringer and the other Elite Women than they were in 2018. 2019 Supercross Cup Day 2. © Angelica Dixon

“The two teammates of Courtney and Ruby were immediately on the front and I was a little bit afraid of that,” explained Fahringer. “I knew that they were going to kind of play games to keep each other together and maybe yo-yo me off and they really knew that they were stronger going through the rooty rock section.”

In the end, Fahringer finished 12 seconds ahead of McFadden, who came in for 2nd place. “I was definitely feeling yesterday’s efforts in the legs today,” said McFadden. “It was really awesome to have Ruby and I up there leading the pace.” “Today was a lot better,” said West, who finished 3rd, after a tough day one where she finished 13th. “I think mentally and physically I was just in it way more today and I was kind of motivated after a pretty awful day yesterday so I wanted to come back and prove to myself more than anything that I could have a good day.” West would finish on the podium 44 seconds behind Fahringer. In the elite men’s race, once again the Cannondale p/b Cyclocrossworld.com team would be dominant throughout the race. “It was a fast start; it’s a hard course here in Suffern,” said White. “Myles did a great job designing the course and the weather cooperated a bit this year so it was a lot more pedaling and a bit less running.” White attacked after a series of attempts by his Cannondale teammates to get away from the group and his would be the one that would stick. “We like to race as a team,” said White, “And we used the numbers to our advantage. I think I went off the front maybe four or five to go and then Lane [Maher] followed suit with a couple laps to go.” White would hold his solo gap until the end, finishing in 1 hour and 11 seconds. 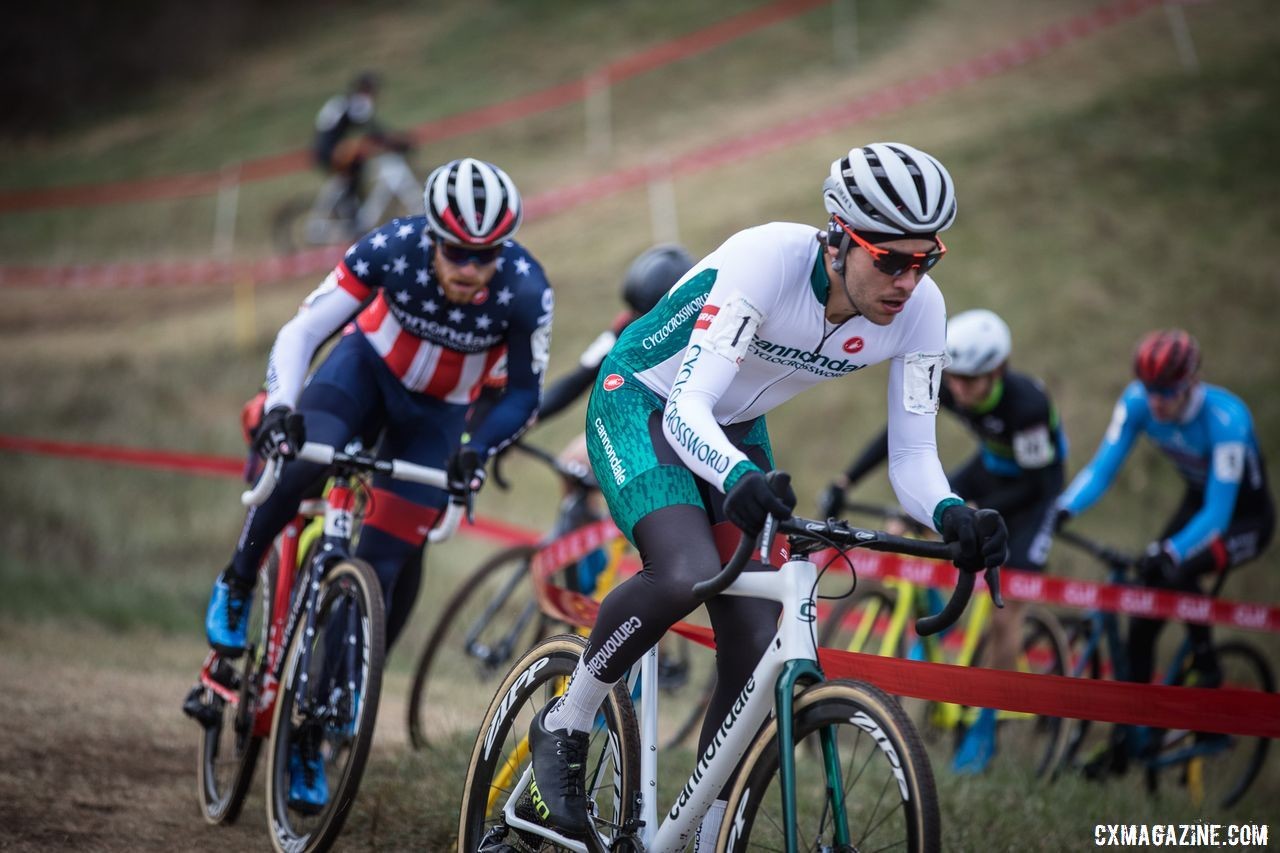 Teammate Lane Maher would attempt to shake up the chase group behind White that contained Stephen Hyde (Cannondale p/b Cyclocrossworld.com) and Kerry Werner (Kona Maxxis Shimano). “I punched it a few times towards the end of the race to try to see if it would help Stephen get away later on,” said Maher, “But I ended up getting a gap by doing that so I just kind of took it and went with it.” Maher fended off the chasers and secured second, 17 seconds behind White. To complete the podium sweep for the second consecutive day, Hyde would break free of Werner by the end as well, finishing 34 seconds behind White. “Kerry is just such a good competitor,” exclaimed Hyde. “I mean, come on, it takes three of us to beat the guy. However, I am really proud of how our team is riding. In the past, we’ve all been on different levels and it’s really nice to have two riders that I can count on as teammates and we can switch it up.” 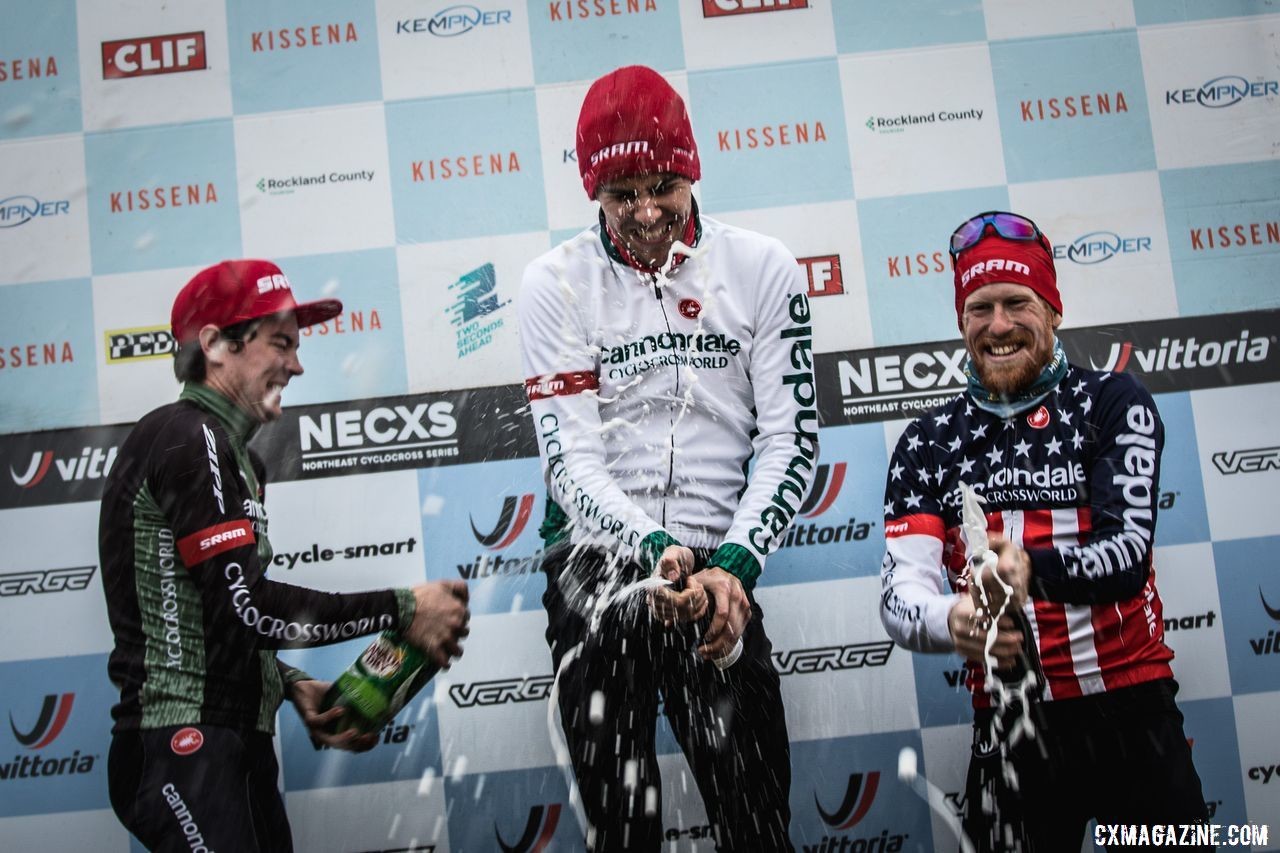 The Vittoria Series will conclude in Warick, R.I. at the NBX Gran Prix of ‘Cross December 7 and 8. Watch the races unfold in person or by following tweets at @VittoriaSeries. Follow on Facebook and YouTube for race weekend highlights video highlights provided by DirtWire.TV. For more information visit necyclocross.com.