Finding the perfect bike light can be a challenge with the huge array of products out there, although we have offered a few tips for hunting for the right light for certain riding conditions, as well as had one of our contributors, Clifford Lee, write an extensive article on riding, training and racing at night.

This year at Press Camp, Knog brought an assortment of lights with them, in such an array that there seemed to be something for every rider, well, at least riders willing to put a leg over their saddle after the sun sets.

Knog’s compact-sized lights seem to grow in variety with each passing year, and for August of this year, their new line is no exception. The company started simple with the Eyeballer, which has a single LED that offers a super-narrow 15 degree beam angle. The light is bright enough for edge of town riding, training rides, and dark trail riding. The Eyeballer’s narrow beam sends light further ahead, and it is the only light in Knog’s line that only comes as a front option (the need for a narrow rear light isn’t massive). 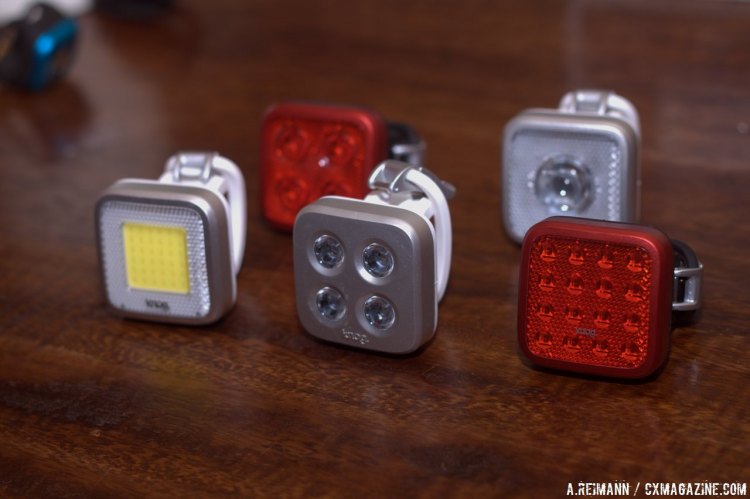 For a broader 35 degree beam angle, the company offers two lights in the Face and Four Eyes. Both models have four LEDs with lenses that focus the light (and a reflector that disperses the light). The rear models have 44 lumens in the front and 80 lumiens in the rear. The 16 LED Kid Grid is one of the company’s lights that starts to break into uncharted territory, which is offered in front and rear and comes with a 90 degree beam angle. Yet in terms of sheer inventiveness, the Mr. Chips takes the cake with a 120 degree beam angle consisting of 64 super small leds. Knog calls this “The Manhattan light” because it is perfect for city, and having an incredibly disperse light that is visible by the traffic around a rider.

The Blinder 4 lights are also back with a few upgrades, including the common concerns with the light’s straps and charging system. The lights have a full size USB port (meaning no need to carry around USB cables) and fully removable strap so that the built-in silicone strap doesn’t make the full light defunct. You might be able to break the new fully removable straps, but instead of a two year warranty, Knog is giving out replacements for free, with three different sizes. The largest strap of the three is able to fit on an aero seatpost.

In terms of the high-powered lights, Knog has the Arc and the and the Blinder Road. The Arc sits on Handlebars with no mounting bracket, and has an elliptical beam pattern designed for an edge to edge on a trail or road. The Arc has upgraded its light output this year, with the $65 model carrying 220 lumens, and the $115 model offering 640 lumens (90 over last year). Both last for 2.5-20 hours depending on the setting. The Blinder Road is a road-specific headlight, with the priority being lumens per gram. (75 gram light at 250 lumiums). It sits in front of handlebars, not on top. The only drawback is the limited 1-4 hour run time, which acts as a “get me home” tool. The Blinder Road comes with removable straps and helmet light.

For the more price conscious, Knog also offers the sub-$25 price point Pop series lights. Using a AA Battery, the Pop models are splash proof, but Knog wouldn’t say that they were water proof. Polycarbonite lens beam angle is nice and round, smooth at edges. The lights are rated to 60 lumens, and run from $17.50 to $24 depending on the model. Rather than slap a black paint job on the Pop lights and call it a day, Knog offers a large amount of color options, both conservative and otherwise (leopard skin, tattoo sleeve and rainbow kaleidoscope are a few of the choices).

The latest line will be available in August 2015.

However, that’s not the only news from Knog. This year, the company decided to expand their products to an off-the-bike-crowd, and offer the “Expose” light to expand mobile videography. Taking what they knew about beam angels and lighting, Knog created two lights made to work with an iPhone, with the more compact version offering 120 lumens at $49.95 with the larger black case model offering 100 lumens at $35. The smaller Expose is also bluetooth compatible, and its light can be adjusted on the iPhone with a Knog app.

For a Knog video of the Expose, along with detailed photos, use the scroller below. More info: knog.com 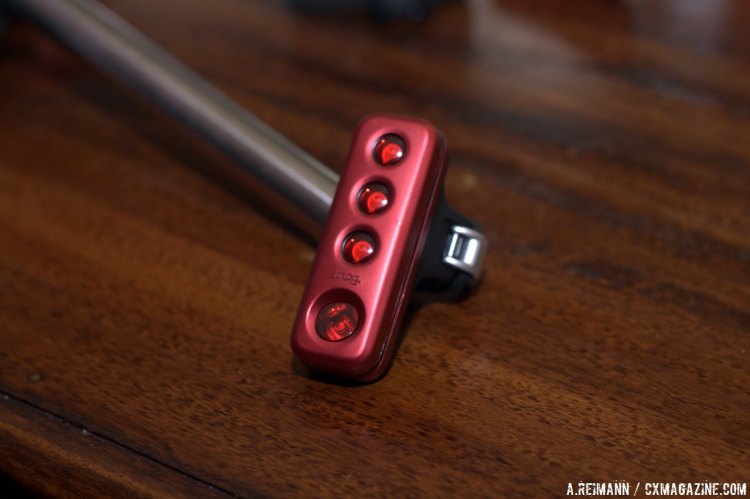 Be Seen and Heard. New Lights, Bells and More from Serfas, Albedo 100, Ottolock and Timber Light Roundup: Heading into the Fall with Blackburn, NiteRider and Ay-Up