King’s CX definitely favored riders with big engines. Unlike the technical and hilly course at Devou Park the previous day, King’s CX was definitely a power course, with long straightaways and wide, swoopy turns. However most of the action happened in the Enchanted Forest, a series of short switchbacks on an incline, leading into a short, but steep, hill. 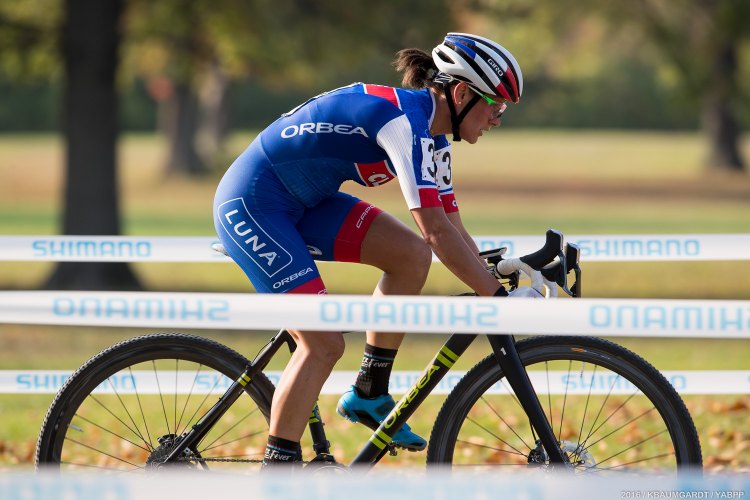 Being ineligible to compete in the Pan Am Championships the previous day meant fresh legs for Nash. © Kent Baumgardt

Nash (Clif Bar) hadn’t raced since Jingle Cross in September and didn’t know how her fitness would stack up against the rest of the elite field. She needn’t have worried. Nash and Saturday’s winner Katie Compton (Trek/Panache) broke away from the rest of the field on the second lap, trading pulls for several circuits. Nash and Compton were virtually neck-and-neck during the last lap when Compton clipped a pedal on the back half of the course.

“I went into those tight switchbacks just ahead of (Compton) and pinned it,” Nash said. “She’s so strong in the flats, I knew if I wanted to get away, it had to be in the (more technical) section.” That momentary slip-up was all the Czech rider needed. A hard-charging Compton couldn’t close the gap, ending up in second place, 12 seconds back. Saturday’s U23 Women’s Pan-Am Championship winner Ellen Noble (Aspire Racing) continued her excellent weekend, capturing the third step on the podium. 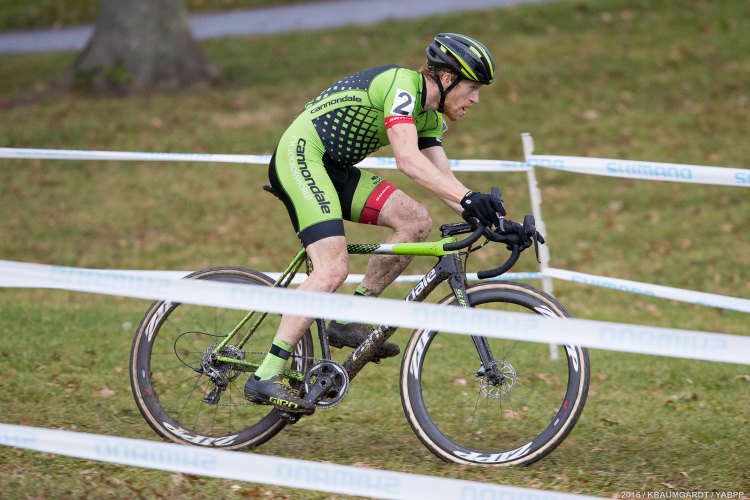 Hyde (Cannondale Cyclocrossworld) captured the biggest win of his career Saturday and followed it up with his second victory in a row. After nearly perfect weather for most of the day, a drizzling rain covered the course minutes after the elite men’s wave began. Turns that racers railed earlier in the day were taken much more cautiously, with several riders still hitting the deck. Many of the riders pitted, ditching their file treads for rubber with a bit more bite.

Despite having only a handful of wet races this year, “I practice in slick conditions every chance I get,” Hyde said. That preparation and confidence definitely helped, as Hyde remained upright and in command for much of the race. Part of a five-man break that included Danny Summerhill (Maxxis-Shimano), Curtis White (Cannondale Cyclocrossworld), Tobin Ortenblad (Santa Cruz Factory Racing) and Kerry Werner (Kona Endurance Team), Hyde started pulling away by a few seconds heading into the Enchanted Forest. What was a five-second lead had more than tripled coming out of the woods, with that lead doubling again by the end of the lap. That gap left the rest of the chase group to battle it out over the remaining two podium steps. White, who attacked earlier in the lap, put in another hard dig about 50 yards after the barriers, only to slide out on the wet grass. The remaining three riders motored away, with Summerhill going on to capture second and Ortenblad outkicking Werner for third.

The exciting race was a suitable finale for the weekend’s Cincinnati Cyclocross Festival and the King’s CX venue, said Julie Herrmann, one of the Ohio Valley Cyclocross race directors responsible for the event.

“The pros continue to be impressed and love the differences in the technicality of the Pan-Am course and the flow of Kings,” Herrmann said. “It was a great farewell to one of our regular racers’ favorite venues.”

Several riders took celebratory shots in honor of the King’s CX course, which is slated to become a highway interchange in the near future.

Be sure to check out our race Photo Gallery below the results.