“I’m definitely riding better, and I am healthy again. And I’m feeling good. That helps a ton,” said Compton about not only winning both Elite Women’s races in Baltimore this weekend, but taking back-to-back C1 races on the USA Cycling Professional Cyclocross Calendar (Pro CX). “I just want to go and make up for having a couple of not-so-great seasons. So I just want to be on the top again and then just race fast. So far so good. I’m really happy with what I am doing today.”

American Ellen Noble (Aspire Racing), who sits atop the Women’s Pro CX individual standings, took the holeshot, with White on her wheel. They were chased by a group of four in the early part of the race – Wyman, Compton, Amanda Miller (Boulder Cycle Sport/YogaGlo) of Burlington, Iowa, and Caroline Mani (Raleigh-Clement) of Besacon, France. 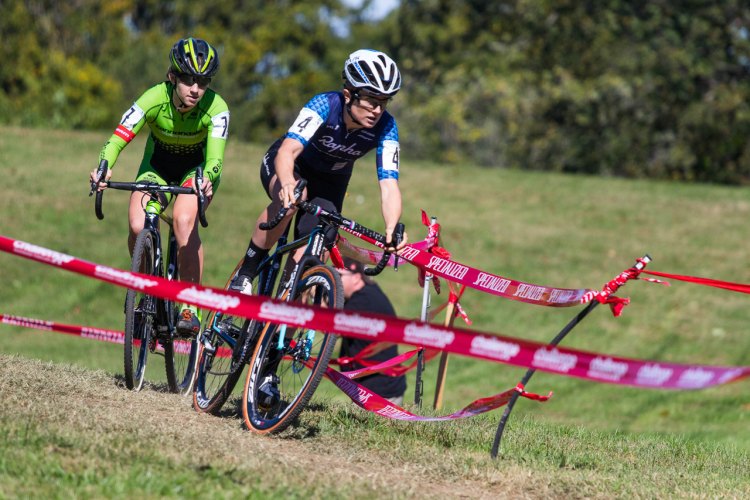 Ellen Noble leads Emma White, but they would not finish in that order. © Ricoh Riott

“We were all a little hesitant at the start. I was following Caroline and a girl crashed in front of Caroline and opened up a big gap. So that is how the gap formed. And we were just chasing. We saw Helen and Emma off the front, so just trying to chase them down and I knew I had to be patient and wait. This course wears on you, the climb is tough, the ground is heavy. So I just had to stay consistent,” Compton said about making the final catch just past the Mansion House in Druid Hill Park to take the lead, and never looked back. “Once I caught Emma and Helen, I just got to the front in the sand and attacked, and it worked.”

“I’m definitely riding better, and I am healthy again. And I’m feeling good. That helps a ton.” -Compton

For a young rider like White, a second-place finish in the C1 Elite race at Charm City Cross was a charm for her. She took second in the opening C1 race of the Pro CX season at Rochester Cyclocross.

“It’s really, really special. One of the first races I did this year in Rochester, was a good start to the season. Since then, I’ve disappointed myself a little bit, just because I had such high expectations from the first race. But this race passes that race in my success ‘times 10’. Behind Katie Compton, this is the best race I have ever raced.”

Wyman was on the podium Saturday, but on the second step, right behind Compton. “It’s a really good course because it is hard,” Wyman commented. Even though it was dry and quite dusty, which isn’t my thing, it was hard. I actually quite liked the race. It’s quite nice to come to America in such a friendly atmosphere and see so many young people riding. It’s really exciting.

“Emma is an incredible talent. She really is as good as the best riders in the world. And Ellen is obviously talented too. It’s exciting to see. There needs to be more of them, we need that across the world. Hopefully, this new Under 23 world championships, last year was the first year, and hopefully we can roll that out into other race, and into the World Cups themselves, and that will grow the sport and keep young riders in the sport.”

For a second day at Druid Hill Park in Baltimore, Mani finished her day in fourth. A total of 38 riders out of 42 finished the C1 Elite Women’s race at Charm City Cross.

Now in its 12th year, the Charm City Cross entertained 48 Elite Women at the start line for Saturday’s C2 race. Wyman, who conducted a youth cyclocross clinic at Druid Hill Park on Friday, has been adopted in the Baltimore area as a favorite ricde, having won this event eight times, going back to 2011.

Huge crowds watched 62 riders under blue skies at Druid Hill Park for the grand finale of Charm City Cross on Sunday. It was billed as a Hyde-Powers match-up in the Elite Men’s Category 1 race, and the crowds were not disappointed. A large group of 15 riders drove the pace at the front for much of the eight-lap race. It was Pro CX men’s point leader Stephen Hyde (Cannondale p/b CyclocrossWorld) of Easthampton, Mass., who made the final push and took his second win in two days at Charm City Cross.

“It was a real big group today. We waited until those last couple of laps and when I noticed that he (Powers) started to get impatient, starting to hit it hard, I stuck with him. When I thought it was the right time, I could go clear, I hit it really hard,” said Hyde, who made his final pass right before the bell lap. “I had good legs today. I was motivated, and coming off some good form from the beginning of the season.” The real punches flew for the other two spots on the podium on the final uphill stretch, with Jeremy Powers (Aspire Racing) of Easthampton, Mass. edging Danny Timmerman (Stan’s NoTubes Elite CX) of Trumansburg, NY by half a wheel. Hyde won the C1 event in 57 minutes, 18 seconds. Powers and Timmerman were 13 seconds back.

“It was definitely a rhythm-type race—turns, corners, hills and it was really fast. Despite it being a really hard and challenging course, there wasn’t a ton of time, or places, to lay down an attack. I attacked with three to go, and he attacked with two to go, and I had to react to that. And I just didn’t have that CO2, high, high-end effort,” said four-time U.S. Cyclocross men’s national champion Powers about the head-to-head match with Hyde. “I felt like it’s a nice step towards a good, strong end of the season.” “Unfortunately I was in the back for much of the day, the back of the front group, which was really quite large. So I was stuck in the back of that for most of the day, which isn’t really smart positioning, I was spending too much energy and getting yo-yo’d,” said Timmerman about the race. “I had the legs today, so when it hit the fan and Jeremy and Stephen went for it, I made the cut. I was just barely was out of it, but I just made it back to Summerhill on the last half lap and was able to get away from him, and get up to Jeremy. He got me by half a wheel. “The last half a lap was all in, just go for it. I was getting frustrated being stuck in the back and I wanted to move up. It was hard to pass, because it was such a big group. I made a really hard push in the last half a lap and was able to just keep the pressure on and get up to Powers. I just didn’t have enough to get around him in the end.”

Summerhill finished 21 seconds back in fourth, followed by Driscoll in fifth, Durrin in sixth and Ortenblad in seventh.

The next events on the Pro CX calendar will be Category 2 races Oct. 15-16 in Gloucester, Mass. for the CRAFT Sportswear Gran Prix of Gloucester and in Boulder, Colo. for the US Open of Cyclocross. Follow the Pro Cyclocross Calendar on Twitter at @USACProCX.