Traveling the world seems like the best job in the world and sometimes it really can be. I will admit sometimes it’s tough living out of a suitcase for six weeks especially when those six weeks go from full summer to what could possibly be full on winter.

However, I wouldn’t change a thing.

Since leaving America, I’ve made a short trip to Belgium to get over jet lag before heading onto my next races. We got to spend a couple of days riding in the Ardennes—one of my top five favourite places to train in the world. If you haven’t been you really should consider it.

Biking in my favourite place in Belgium! Love the Ardennes it’s been too long since my last visit. The sun even came out eventually!! #winning #kindhuman #fromwhereisit #bornfromriders #cyclocross

We stayed just outside of Spa and I managed to squeeze in some of my favourite climbs and do a ride by of the motor racing circuit, to see if there were any winning watts lying around ready to re-use.

It wasn’t long before we headed to the next races, firstly in France then the following day in Switzerland. I’ve never raced a non-World Cup or championships race in France, and it just brought back so many memories of my time road racing there.

It’s safe to say the French love a reception, and who’s to blame them with that amount of local wine floating about. I’ll never forget the race lunches at UCI road races in France where even the police moto riders have a glass of red with their baguette and cheese.

The next day we went to the 2nd round of the EKZ Cyclocross Tour at the UCI cycling centre in Aigle, Switzerland. A complete contrast to the previous day, I would put the level of organisation and course of this series up there with the DVV or Superprestige series and it’s always a treat to be there racing. The racing over the weekend was fast and dry with great competition. An emerging rider Denise Betsema won both days.

I’ve always said this and I believe it’s true: Every year you train harder and smarter than ever, mix things up, add new ways to gain that extra edge, only to find your competition also has. We are in an exciting period for ’cross with a new batch of stars emerging and threatening to dominate our sport.

A Word About Mums in Cyclocross

Every year there are other breakthrough riders who have made huge leaps, propelling them to be serious competitors at the top of the sport. We as riders are judged by commentators, spectators and even fellow competitors. You see people looking at race results comparing this rider to that rider and judging where they think we should finish or if we have been good enough.

Among this, you hear the odd comment like, “But that rider is a mother, how can they be up there like that.” Well world, here is this week’s home truth moment.

Firstly, I am not a parent, well I am, to a dog but I’m fairly sure that doesn’t count. So I have absolutely no idea what it feels like to have something (someone) entirely dependent on you for every single aspect of their young lives and exactly how draining that is. However being a mother does not make you incapable of being a world-beating bike rider. Just because a rider has a child doesn’t mean they are suddenly unable to win or even be highly competitive in a bike race.

Loes Sels twice won the Belgian national cyclocross championships before she had children. She is still that same talent 10 years later, as she has shown in her multiple wins and podiums in Belgium over the last 18 months. Lucie Chanel didn’t finish on the Worlds cyclocross championships podium until after she had her first child. Christel Ferrier Bruneau, former French national champ, retired, had a child, came back and is the current Canadian champion. I’m pretty sure that the mums feel the same as I do about how people may judge them. They are pro riders, they are competing and training at the same level as the riders around them. They want to be rated on their performances not their family situation.

A couple of years ago the national team manager of Belgium choose to not select Loes Sels for the world championships, publically stating there is no place in the team for “Loes Sels, mother of two and hobby cyclocrosser.” Fortunately, he subsequently apologised and she did in fact go to Worlds. 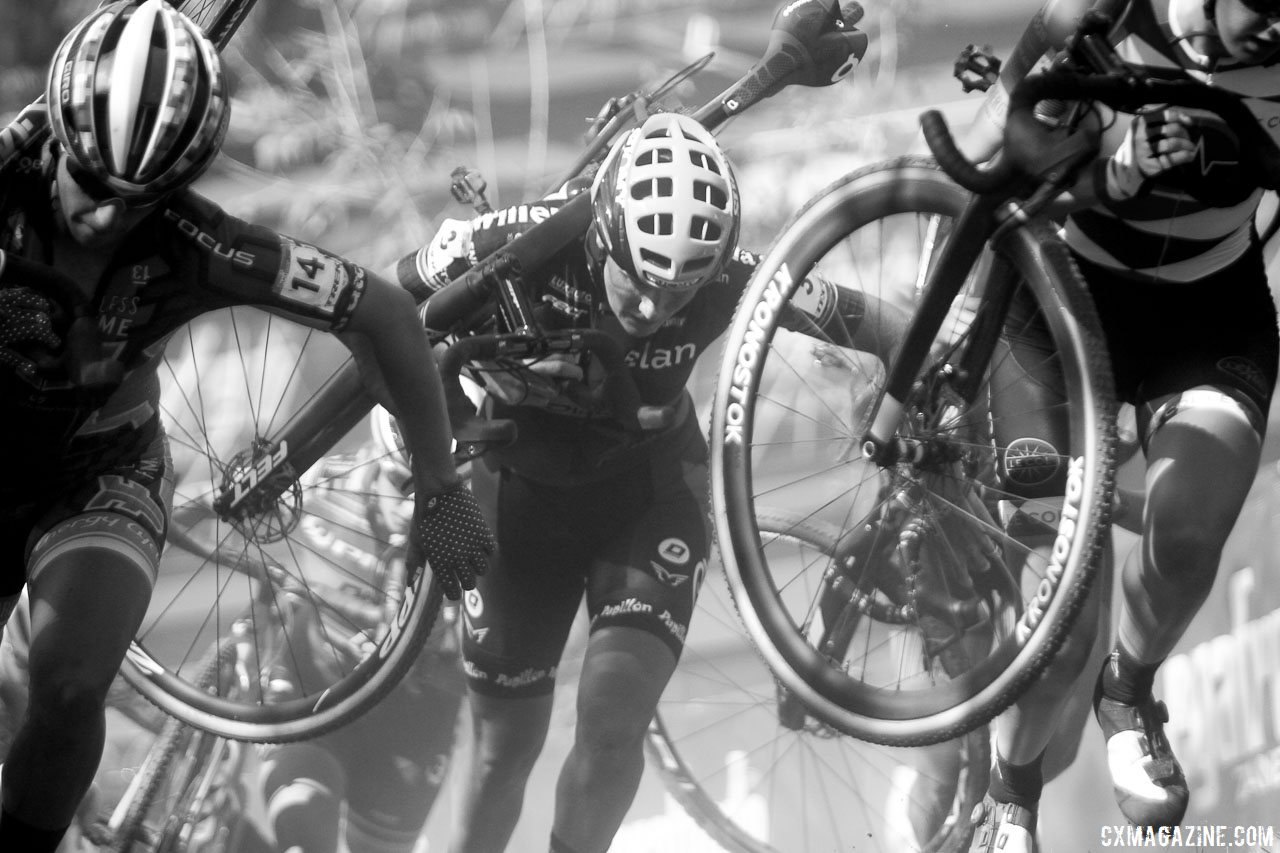 I don’t want to be judged on the home circumstances of who beats me, I’d much rather see them lavished with praise for their performance, rather than have my own belittled as the rider ahead happened to have children. After all, I’ve never heard anyone make reference to an Elite man’s parental status.

Switzerland and Back Home for Doggy School

Moving on, after Switzerland we border hopped back to France to another of my favourite places to train, the French Alps. Right now they are absolutely stunning. With the crazy weather the world seems to be experiencing right now, it has been absolutely glorious up here at 1,800 metres altitude. It hasn’t rained once, we have been training in shorts and jersey—with obligatory arm and leg warmers for those early descents—and the views are even better than in the summer.

Yep autumn in the alps is just as stunning as summer. Totally lucked out with the weather the last 3 days. Love love love it here! #sorrynotsorry #bornfromriders #kindhuman #cyclocross

From here we border hop back into Switzerland for the next round of the World Cup series in Bern. It’s being organised by the same people who run the EKZ Cross series, so I am expecting impressive things.

Following the race, we finally drop home for a week before racing in Spain. I’m excited for the next round of races, and I’m pretty sure the dog is excited to go back to doggy school even if it is only for one week. I’m pretty sure that my dog has been to more countries than many people have and he’s only just turned six months old. He’s not a bad traveler either, better than some people I’ve been on teams with.

Although I don’t remember any of them crying when we drove through a tunnel, unless they were being cuddled.

Run club is down to just me and dog these days and I’m not entirely sure the dog is following the “no attack” rule!! #runclub #altituderunninghurts