As we have seen before, sometimes all it takes is one taste of gravel racing to get you hooked. Such was the case for Oregon’s Sarah Max.

With a long, eclectic history of bike and cross-country ski racing, Max found herself in Idaho at gravel legend Rebecca Rusch’s camp last summer. It was love at first … grind.

“A friend who lives in Ketchum, Idaho suggested another friend and I join her for Rebecca Rusch’s Gravel Less Traveled camp,” Max said. “It seemed like a good excuse to ride something new and spend time with my friends. It was all that and more, and it inspired me to sign up for Rebecca’s Private Idaho. I did the three-day stage race and had a blast.”

After a shoulder surgery following RPI, Max decided she needed a goal for the 2019 season. Enter the Dirty Kanza 200, the granddaddy of them all.

The first hint that something special could be in store for Max came a month before the DK200 when she finished second in the loaded Belgian Waffle Ride field. That past proved to be prologue as Max overcame some untimely flats to finish third at the Dirty Kanza 200.

Max’s bike for her big ride at the DK200 was a carbon Argonaut GR2 gravel bike custom built for her near her Bend home. I took a look at her bike right after her DK200 finish for this bike profile. 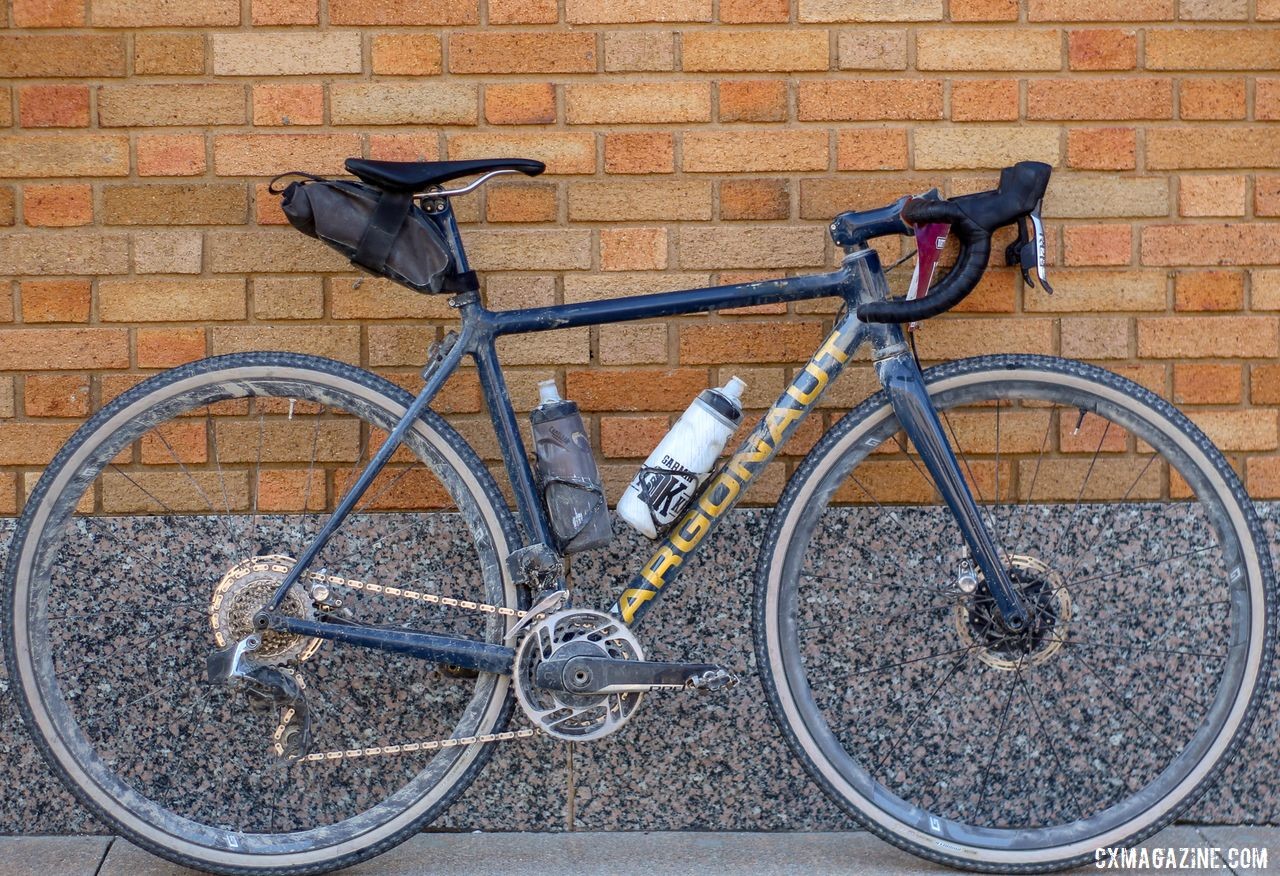 Argonaut Cycles was founded by Ben Farver and is based in Bend, Oregon. Farver got his start working with steel, but the company now builds high-end custom carbon bikes in its Bend shop.

That Max is riding the Argonaut GR2 is thanks to a bit of serendipity.

“Ben heard I was getting into gravel and in January reached out and asked if I wanted to be an ambassador for Argonaut. I didn’t have to think twice,” Max said. “Not only is this my dream bike, that it was hand-built about a mile from my house is insanely cool.”

“Argonaut was looking for a female brand ambassador in that space, and it just worked out to be a great fit,” Farver explained. “Before riding gravel became popular we got a lot of requests for a cyclocross bike, but I felt like there wasn’t a strong market for a top-tier custom carbon race cyclocross bike because most folks race their ’cross bike for three months and then don’t touch it until the following September. A gravel bike makes a lot more sense for us to make because they’re ridden all year.”

The cyclocross –> gravel connection is another reason the partnership between Max and Argonaut works well. Max has raced in Oregon’s Cyclocross Crusade for years and still enjoys getting out for a good rip or two.

“As is the case with a lot of gravel riders, ’cross was my introduction to gravel. Years before I started gravel racing, I was exploring combinations of single track, fire roads and crappy pavement on my ’cross bike,” Max recalled.

Argonaut currently offers two frames, a road bike and the GR2, although it designs each bike to the customer’s needs. To build its carbon frames, it uses a monocoque molding style where it builds each section of the bike separately and then bonds them together. The carbon is a high modulus blend designed with layups specific to each rider. Max’s GR2 has a head tube angle of 72 degrees and an ENVE Allroad carbon fork with a trail of 47mm. The chainstays check in at a short 42cm and the setup yields clearance for tires up to 700c x 38mm wide. In addition to doing its own design and manufacturing, Argonaut also does all its painting in-house. At Dirty Kanza, Max’s bike sported a blue and gold paint scheme, although that was not the case a month ago.

“I rode my GR2 at the Belgian Waffle Ride but it had a stealth paint job at the time. Ben and his team finished building the bike the day before a three-day race in Bend. I did that race and a week later did BWR,” Max said. “Before Dirty Kanza, they took apart my bike, repainted it, rebuilt it and shipped it to Emporia. When I unpacked it Kansas, it was New Bike Day all over again.” We have seen a mix of 1x and 2x drivetrains from the Dirty Kanza 200 and Lost and Found, and Max ended up coming down on the double side. She ran the new SRAM Red 1 eTap AXS gruppo with 46/33t rings in the front and a 10-33t cassette in the rear. Her crankset was the SRAM Red AXS Power Meter with a built-in Quarq DZero power meter.

“The question of single or double was one that kept me up at night for weeks. Well, not really, but I was torn,” Max said. “I love the simplicity of a single, but I ultimately decided I wanted as much range as possible without having to think about swapping cassettes for different kinds of terrain. I can barely change a tire.” Just as she got into gravel with a friendly recommendation, Max sought advice when it came to tire choice. She ended up opting for 700c x 38 Maxxis Ramblers—they worked for Ted King and Kaitie Keough last year, after all—even though there were other offers on the table. Max’s tanwall tires have the EXO casing for extra protection. The tanwall choice is interesting because Maxxis currently offers only its 40mm Rambler with the tan side wall.

“The day before the race, IRC offered me a pair of reinforced Bokens they made specifically for Dirty Kanza. I was so tempted but didn’t want to mess with anything at that point.”

Every time she has to pick tires, Max thinks back to her cross-country skiing days. “Picking tires is as much an art—and a stress—as picking wax,” she joked. Max was in the lead group at Checkpoint 1 with Olivia Dillon (Velocio) and Amy Charity (DNA Pro Cycling Team), but shortly after leaving Alma, she was the first of that trio to be devastated by flats.

“I started with 28 psi, then let a little air out at the first checkpoint, which I regret,” Max said. “About 10 or 15 miles later, I got a sidewall tear. Was it the tires? Was it the tire pressure? Was it the infamous flint? I have no idea, but I got the full DK experience.” Max rolled with the ENVE squad at the DK200, so it was not surprising to see her on the company’s G23 carbon tubeless clinchers. The rims have an internal width of 23mm, narrower than the 25mm wide ENVE SES 3.4 AR rim, but still put Max’s 38mm tires right in the sweet spot for width, volume and inflated shape. ENVE and Chris King chipped in for Max’s cockpit with a King NoThread Set headset and a matchy-matchy blue ENVE Road Stem. ENVE now offers a G Series flared gravel handlebar (which we are currently using for a review), but Max went with a carbon ENVE Road Handlebar. Her seatpost was also an ENVE carbon model, and she ran a Fabric Race Line saddle. Underneath her saddle was a Surly saddle bag she borrowed right before the race. For a closer look at Max’s Argonaut GR2, see the photo gallery and specs below.