HUESDEN-ZOLDER, BELGIUM – As the rain pounded down on the elite men, Sven Nys (Landbouwkredit) again had the upper hand over Niels Albert (BKCP-Powerplus) to ride away for the win. The two Belgians rode most of the race together, trading duties on the front as Kevin Pauwels (Telenet-Fidea) and Zdenek Stybar (Omega Pharma-Quickstep) led the chase behind. In the final two laps, however, Nys consistently had Albert on the ropes, opening up small gaps and forcing the World Champion to claw his way back. On the final pass through the course’s off-camber uphill switchback, Nys opened a small gap, looked behind him, and stomped away. Albert gave chase, but Nys further expanded the gap as he launched himself down the muddy, treacherous hill that twice claimed Katie Compton, as well as Tim Johnson (Cannondale-Cyclocrossworld) and Steve Chainel (FDJ). Though fast, Albert’s descent was not so fearless, and Nys powered through the technical back half of the course as behind him the World Champion visibly gave up the ghost, once again defeated by the General in a two-up duel. Behind them, Zdenek Stybar escaped from Kevin Pauwels and Radomir Simunek (BKCP-Powerplus) to cross the line alone in third.  Nys and Albert are now tied in points in the World Cup series, with Nys taking over the lead by virtue of having more victories. Jonathan Page had top American honors with 23rd, and Timothy Johnson came in at 28th, with Justin Lindine (Redline) in 36th, Jeremy Powers (Rapha-Focus) in 37th and Jeremy Durin (Jam Fund) in 40th.

“It’s not so easy, you need to have the good feeling on the bike,” Nys said when asked about his dare-devil descent. “That suited me very well. In the final round, it was all or nothing and the descent was with the eyes closed shut and hope that I stayed on the bike. With the rain the course was getting harder and harder. I tried to have a good gap on the downhill because the technical track was on the back. Normally I can win a sprint against Niels, but you never know. I prefer to have a gap before the sprint.”

“I’m going to try [to win Worlds],” he continued. “It’s not so easy with the other guys riding so well. It’s still one month to go, and we’ll try to have good victories in the next few days and see what happens.”

“Maybe I should think about my name change to Poulidor?” Niels Albert joked after the race. “I do not want it as an excuse, but I had a bad day with stomach problems, diarrhea and vomiting on Christmas. In the end I had deflated legs. I had not the good feeling in the final. But Nys was the deserved winner. For the World Cup, Nys and I again start from scratch.”

“I knew in the second round that I would not win,” said Stybar. “It was too fast and too technical for me.” The former world champion went on to say he will contest the Czech national championships in January.

“Nothing positive to report here,” tweeted Jeremy Powers, who was not seen on camera during the race and finished far afield. “I’ll be good though. Couple days at home and we’ll be laughing.”

Bring on the ’Cross Conditions

Although the earlier races saw dry conditions on this Boxing Day, as the Elite men lined up for their start – Zdenek Stybar peeking over Rob Peeter’s shoulder from the second row – the ’cross gods saw fit to give us a true cyclocross affair and opened up the clouds, thus assuring that each lap would become more treacherous than the last. Lars van der Haar again stormed into the lead for the holeshot, with Klaas Vantornout right on his wheel, followed by Rob Peeters, Zdenek Stybar, Radomir Simunak and Sven Nys. World Cup Namur winner Kevin Pauwels had a poor start, well outside the top twenty, while Tim Johnson maneuvered himself into eighteenth.

As Stybar, Tom Meeusen, and van der Haar traded leads at the front, however, Johnson’s strong position faltered as the Cannondale rider went down on the long, steep descent, slipping out of the large string of riders. As the rain continued to fall, the next to go down was Vantornout, who slid out on one of the short, steep drops.

As the riders came around for the second lap, the race was one long, unbroken string, led by Stybar and Meeusen, with van der Haar, Nys, Albert and Bart Aernouts in tow. It was not until the second half of that lap when two factors combined to cause the first separations of the race: Niels Albert took to the front and began pushing the pace, and Steve Chainel crashed on the descent, blocking a host of riders – including Kevin Pauwels – creating a split about ten riders deep. Nys was quick to grab Albert’s wheel, along with Meeusen, and soon the trio were alone with a small gap back to Stybar, Simunek and Aernouts.

And then there were two

With seven laps to go, Albert continued to drive the pace, and soon it was too much for Meeusen to handle. The Telenet-Fidea rider slipped off the lead pace, and once again the race was down to the World and Belgian champion. In nearly every race this season where the two have dueled together at the front, Nys has come out on top – Albert’s wins have come from solo escapes that Nys could not follow. Would Albert be able to change the script today? The world champion certainly tried, driving the pace hard and, at times, slightly gapping Nys as they raced around the lap. However, as they came around with six to go, it was clear that Nys had no intention of letting Albert get the gap needed to take advantage of his consistent power, and from then until the final lap, the two traded leads at the front, keeping on the pressure but never losing contact with the other.

As the two leaders consolidated their position at the front, Kevin Pauwels set about pulling his small group – containing Vantornout, Julien Taramarcaz, Simon Zahner, and Rob Peeters – back into podium contention as ahead Stybar, Aernouts, Simunek and van der Haar made up the lead chase. With just over five laps to go, Pauwel’s efforts paid off and the two groups merged into a single, large chase. It was already too late to bridge to the top podium spots, but with third still up for grabs, this group provided some exciting racing as Pauwels, Stybar and the rest each tried to unseat riders from the group.

The first to fade were Aernouts and Meeusen, who held on until three to go before slipping back into the second chase group, containing Zahner, Taramarcaz and Vanthourenhout. Pauwels and Peeters then gapped the rest, forcing Stybar to dig deep to bring it back. At the front, meanwhile, Nys had begun to test Albert, using his technical skills to consistently open small gaps on the world champion, forcing a grimace onto Albert’s face that, by the last lap, had become permanent. On the off-cambers, on the descents, on the zig-zags in the woods, Nys forced open doors that Albert had to close, losing a little more energy each time.

Behind them, the lead chase now consisted of Pauwels, Simunek and Stybar, with van der Haar chasing furiously to regain contact. A slip by Pauwels on the off-camber switchback gave Simunek a gap as Stybar was caught behind the fallen rider, and allowed van der Haar to briefly make contact again.

On the last lap, the General strikes

Albert and Nys crossed the line together with one to go, thirty seconds ahead of Simunek, who had been joined by Stybar. Pauwels chased a few seconds behind, followed by van der Haar. Nys drove the pace, gapping Albert briefly in the front-side woods, but Albert clawed back and attempted to take over the lead. That did not last, however, as Nys swung back into the front right before the off-camber switchback and rode-then-ran the low line while Albert chose to run-then-ride the high.

[Watch Nys find the perfect line during the race, complements of the folks at In The Crosshairs.

By the turn at the top, Nys had a small gap and a perfect remount, gave one look back to see the pain on Albert’s face, and then dropped the hammer. Nys looked back one more time, shifted, and was all but gone. 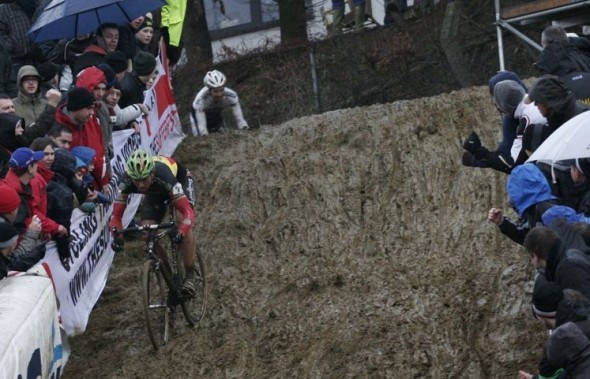 The Belgian champion’s timing was perfect: throughout the race, he had proved slightly smoother and quicker than Albert on the long descent that came soon after, and this time he all but flew down it in a fearless dive-bomb that easily could have lost him the race, and a few ribs, if he had misjudged. The world champion did his best to respond, but Nys had broken the chain. As Nys powered up the sandy hill before the final turns of the course, the fight visibly left Albert, and the world champion once again had to concede defeat against the Kannibaal Van Baal rode away to the win, his hand raised to the sky, the World Cup lead now his.

Behind them, two-time World Champion Zdenek Stybar proved he still can stand with the best and powered away from Pauwels and Simunek to cross the line alone in third. Simunek followed, and Pauwels rounded out the top five.