Gianni Vermeersch is one of those riders who normally sits just outside of Sporza video coverage. As Wout van Aert and Mathieu van der Poel rip each other's legs off to announcers' cries, Vermeersch is close behind, fighting an equally-challenging fight for far less of the video coverage glory. Even at 2016 Jingle Cross, where he took second, multiple news sources glossed right over him.

The Steylaerts-Verona rider's season has been fraught with disappointments, with multiple rear derailleur issues and flat-riddle races, but it's also been triumphant. While the top step of the podium was just out of his grasp all year, he rode away with 20 top-10 UCI finishes. Seemingly no one was safe from mechanicals at 2017 Worlds in Bieles. Michael Boros ran across the line with a broken derailleur fifteen seconds ahead of Vermeersch, both racers’ derailleurs flopping with each foot strike, reminiscent of Stephen Hyde’s 2017 US Nationals finish-line crossing. What’s worse, Vermeersch racked up as many flats as number of laps raced.

"I punctured seven or eight times," Vermeersch told Sporza. "My father shouted I had to keep riding because they no longer had bikes ready. I rode half the race on a flat tubular." Game: over. Gianni ran this mess across the line for eighth at Worlds. © Cyclocross Magazine

Despite the laundry list of issues Vermeersch experienced during his World Championship race, he finished in eighth place. In our review of the 2016 Guerciotti Lembeek, we noted that “almost everything about our model feels European,” but Vermeersch’s is noticeably more Yankee-fied. Easton, K-Edge, and Mercury earned their spots on Vermeersch's docket, for an American-Italian medley. The lightweight carbon Easton EC90 SL crankset (reviewed here) is finding its way on a number of European pro bikes, including on Laurens Sweeck's ERA-Circus team as well. We first saw the K-Edge single ring chain catcher in its prototype stage, but now it's out in the wild and taming the wild Euro courses in the rare case the narrow/wide Easton ring fails.

But let's not forget the French element, too. FMB tires have been a staple of European cyclocross for ages, and for good reason. The company touts that each tire is completely hand built, and takes around two weeks to create. Casings are woven from a single spool of thread, and tubes are hand-stitched into the tires. Before Bieles, Vermeersch's start bike we photographed featured the Slalom tread — a tread that Katie Compton gave feedback on three years ago. [Coincidentally, Compton crushed the competition at this year's Leuven Soudal Classic, and also won the series.] Mercury hasn't been sighted too often at elite 'cross races in the past few years, but Gianni rode these M3's on both Lembeeks. © Cyclocross Magazine

The FMB Slalom tires are mounted on a set of Mercury M3 carbon tubulars. Mercury M3s come in at 24mm wide and 38mm deep, and feature Sapim CX-ray spokes and over-sized axles. The wheelset is 1370g, and is currently sold out on Mercury's website. It's worth asking if Vermeersch's consistent issue with flatting can be attributed to these wheels or supple FMB tubulars, but many other athletes suffered the same fate at Bieles.

Vermeersch's teammate, Maud Kaptheijns, leaves the 2016/7 season behind with a slew of achievements on her Guerciotti Lembeek, including a victory over Sanne Cant in Lille after narrowly avoiding a crash into Sophie de Boer and Laura Verdonschot. 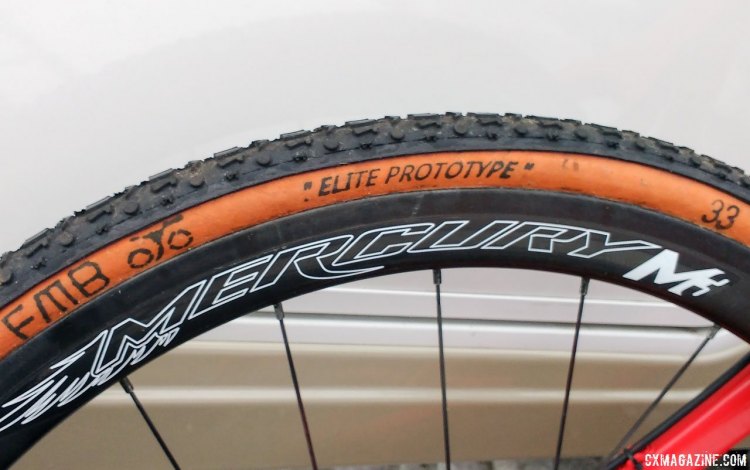 Mercury hasn’t been sighted too often at elite ‘cross races in the past few years, but Gianni rode these M3s on both Lembeeks. © Cyclocross Magazine

Next post TBT Video: When Euro Cyclocross Was Really Hard